1 Moscow Carnegie Center 10 February 2011 Sovereign Debt and the IMF: the case of Russia and Lessons...

1 Moscow Carnegie Center 10 February 2011 Sovereign Debt and the IMF: the case of Russia and Lessons for Europe Martin Gilman Martin Gilman Director, Centre for Advanced Studies, National Research University Higher School of Economics, Moscow Slide 2 2 Based upon my book, No Precedent, No Plan: Inside Russias 1998 Default, recently published by MIT Press Focus of todays seminar is on sovereign debt and the International Monetary Fund in the case of Russia, and the lessons from that experience Slide 3 3 Why did the Russian default of 1998 happen? Was it inevitable? What was the role of the IMF? What are the lessons for Russia and others? Main questions covered: Slide 4 4 Russia and the IMF were unlikely partners Russia presented a unique challenge to the IMF Why the IMF? Why not the World Bank? Slide 5 5 Some major themes in the book: When Russia emerged from the collapse of the Soviet Union in late December 1991, the challenge was unprecedented There was no plan of action, no obvious or easy solutions, but plenty of controversy Russias policy response to the economic collapse stemming from the disintegration of the Soviet Union was chaotic The Russian authorities learned quickly and generally understood what had to be done, but personalities and politics constantly interfered to block needed policies In the end, the IMF and the G-7 played a marginal role Slide 6 6 the creation of the GKO market was a Ponzi scheme from the outset, or the monetary-fiscal policy mix was inappropriate and unsustainable, or the debt burden inherited from the USSR was just too high, or the Asian crisis created an irresistible dynamic, or having secured Yeltsin's re-election in 1996, the oligarchs stopped paying taxes so revenue collapsed. Like many accidents in history, the Russian default was not pre-ordained. Some have contended that: Slide 7 7 Was there something feasible that someone in the Russian government could have done at some point that would have prevented the crisis? When did the prospects for avoiding a crisis start to deteriorate? If the crisis was avoidable, how? The problem of the counterfactuals Slide 8 8 Public debt in Russia was not so high by international standards Source: IMF Slide 9 9 Zero option agreement of 1992 Foreign public debt ($150 bln.) versus domestic debt ($55 bln.) GKO debt was only 27% of total public debt Debt flows versus stock problem trend in GKO rates Slide 10 10 Turning point was March 23, 1997, when Prime Minister Chernomydrin was sacked Even then, on the whole, the bond market was not convinced of an imminent crisis After the dismissal of Chernomyrdin, could anything have been done to forestall a crisis? An avoidable crisis becomes unavoidable. What really was the trigger? Slide 11 11 Why is it that no one, including the IMF, was expecting a default? Since the debt was in rubles, why didnt the Central Bank just print more money? In the end, Russia never defaulted on its external debt when it could have. Why? In financial history (witness Reinhart & Rogoff) a default on domestic public debt is very rare and hasn't happened in a major debtor since the great depression. Slide 12 12 Under Primakov, the meltdown was avoided by chance Why did the economy rebound? The friendly divorce with the IMF The surprising postcrisis recovery Slide 13 13 Macroeconomic prudence Stabilization funds Tax policy and administration Musical chairs stopped Structural reforms until high oil prices bred complacency The legacy of the crisis The 1998 default was a turning-point: Slide 14 14 Stolen IMF tranche BONY money-laundering IMF was tricked Scandals associated with the Russian crisis: Slide 15 15 Sterotypical views about Russia are probably wrong The reality is more complex than implied by simple theories, and more troubling External perceptions contrasted to internal ones In the end, did we know that a crisis would erupt in Russia? History is not doomed to repeat itself Slide 16 16 similarities with developments in Ireland and Greece are striking as in the case of Russia, they and their banks took advantage of a benign global environment to issue large amounts of debt on the local market on the assumption that it could always be rolled-over the securities were issued in local currency among the largest buyers of the sovereign securities were domestic and foreign banks and the International Monetary Fund was called in to do the heavy lifting once trouble developed Some of the parallels between the events in Russia almost 13 years ago and current concerns with sovereign debt: Slide 17 17 The next steps in the drama It is likely that the bond markets will persist in the belief that European politics would never allow a default until it actually happens whatever it is actually called A lesson from the Russia crisis is that the longer you wait, the worse the results will be when you are forced to deal with the issues No particular outcome is inevitable The problem of crisis prevention 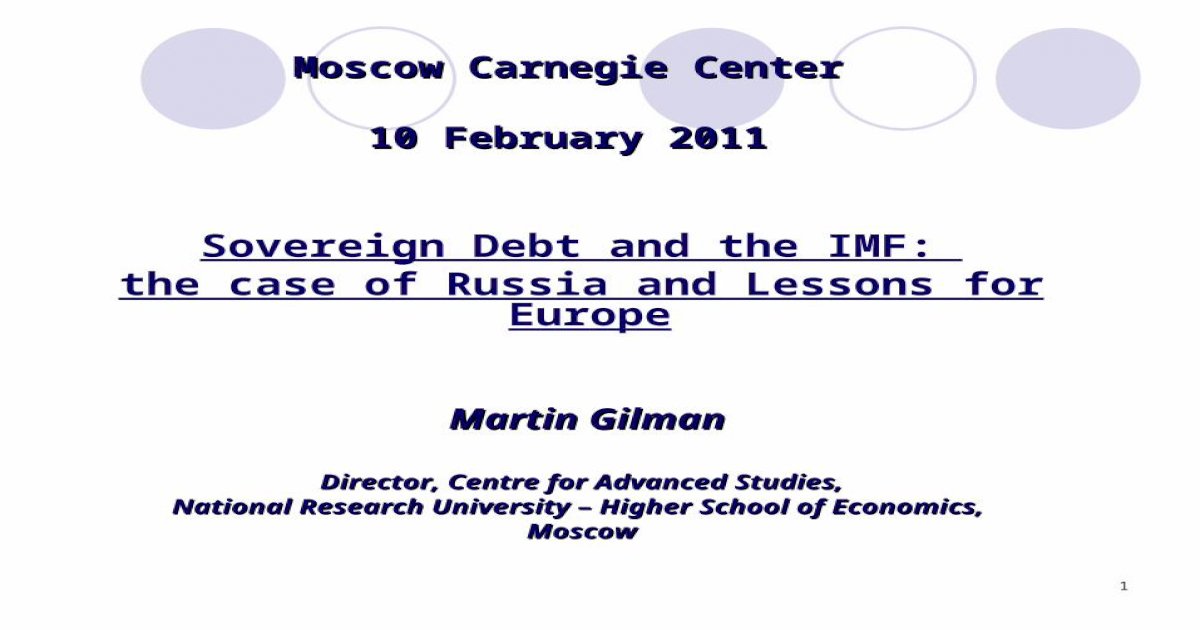 Managing the Sovereign-Bank martin/sovereignnexus.pdf · PDF file 2018-09-18 · The financial health of banks and sovereigns is intertwined in a “sovereign-bank nexus” that may

About a Gilman Boy