As we stand on the threshold of the 21st century, major challenges are facing the world of telecommunications: Competition is growing within the market Subscriber traffic volume is increasing The range of new services is expanding Speech and data networks are growing together Internet usage is increasing rapidly Multimedia services present new opportunities

Siemens was quick to realize the direction in which telecommunications was developing.The digital electronic switching system EWSD was therefore given a major innovative overhaul and is now in a position to solve the telecommunications problems of tomorrow. For network operators, EWSD represents the latest in communication technology, providing a fast and costefficient response to all the challenges facing the telecommunications markets. EWSD implements all telecommunications applications on a proven hardware platform.This platform is a highly economical and reliable one and represents a sure investment for the future. Network operators who choose EWSD choose continuity. EWSD is already the best-selling product of its type and is being used successfully in over 100 countries throughout the world. By the start of 1998, over 150 million access lines had been installed, which means that one in every five calls in the world is processed with EWSD technology.

EWSD is the solution for telecommunications requirements in the 21st century.

EWSD The Proven Platform for Telecommunications RequirementsNetwork operators throughout the world are preparing for the challenges about to face telecommunications networks in the next century. All the prerequisites for meeting these challenges are already available from EWSD, which provides the necessary functions on a common platform. EWSD PowerNode for a more powerful and dynamic network From the very beginning, EWSD was developed as an open system with a flexible hardware and software architecture. The EWSD Power Node is the logical continuation of this trend. It incorporates the powerful new EWSD hardware platform, on which both the new and the classical switching applications can run simultaneously. There are unlimited possibilities for future applications. The EWSD PowerNode offers a flexible, economic solution for all requirements resulting from different network structures and sizes. The new applications implemented on the EWSD platform are: EWSD InterNode to optimize Internet access EWSD BroadbandNode the bridge to the world of multimedia services The classical applications can also be used on the EWSD platform: Local network node Transit network node Network interworking node in fixed networks Mobile communication network node in mobile networks Service Switching Point (SSP) in intelligent networks (IN) Signaling Transfer Point (STP)

EWSD PowerNodeThe EWSD PowerNode is the answer to the changes currently underway in network structure. With the EWSD PowerNode, the network can now attain the high power level it requires to deal with the rapid increase in subscriber traffic in conjunction with new services. The change in network structure, i.e. network consolidation, is a result of the costs situation facing network operators. As networks become deregulated, competition is growing among the various telecommunications networks, and prices for existing services are falling all the time. Network operators are now trying to offset the effects of the lower prices by reducing their operating costs. On the one hand, network consolidation means decreasing the number of network nodes and dismantling network hierarchies; however, it also results in control functions being centralized among a small number of network nodes. Existing analog network nodes or the smaller digital network nodes are being replaced by remote line units. Those network nodes that remain have to be powerful enough to take on the control of the subscribers at the remote line units. The growing need for powerful networks is also due to an increase in subscriber traffic, which primarily results from the new communications services with transmission rates of up to 2 Mbit/s. These communications services include the integrated services digital network (ISDN), online services and the Internet, as well as services with n x 64 kbit/s.

The EWSD PowerNode has the capacity to cope with major network consolidation. It covers all network-node applications, such as those for local network nodes, transit network nodes and network interworking nodes. The EWSD PowerNode can also be used as a mobile services switching center (MSC) in mobile networks or as a service switching point (SSP) in intelligent networks (IN). In addition, the PowerNode hardware can form a cost-efficient basis for a standalone signaling transfer point (STP).

While the individual system components are now much more powerful, the EWSD PowerNode is still based on the tried and tested hardware and software structure of EWSD. This means that existing EWSD network nodes can be easily upgraded to incorporate the more powerful components. Existing EWSD periphery can still be used with the EWSD PowerNode, so any investment in EWSD periphery retains its value. One important element of the EWSD PowerNode is the remote switching unit (RSU), which covers the needs of the large remote line units.

EWSD InterNodeThe EWSD InterNode integrates Internet technology into the EWSD system: it creates the basic conditions required for speech and data networks to grow together. Network operators have the core competency to amalgamate their current communications processes with the Internet world. Also, with their existing network, they already have the ideal infrastructure for linking up to the Internet. Through the Internet, network operators can themselves take on the role of Internet service provider, as well as opening up a completely new source of income by providing high bit-rate connections over the regular subscriber line. The number of Internet users is multiplying throughout the world every year, with a corresponding increase in Internet traffic. New applications such as the World Wide Web (WWW), Voice over Internet and e-mail are also contributing to the growth in traffic. In the network structure of the future, the EWSD InterNode links the telephone network to the Internet. The interface between subscribers and the Internet is formed by the point of presence (PoP), which is integrated in the EWSD InterNode. A common platform shared by the EWSD InterNode and EWSD PowerNode ensures common management, billing and optimum interworking of Internet users and telephone subscribers. The EWSD InterNode thus means low startup investment for Internet access as well as optimized operating costs.

Each subscriber with access to the Internet via the EWSD InterNode remains fully accessible by telephone during the Internet session. Meanwhile, the network operator benefits from a higher call rate and from additional call-charge income.

EWSD BroadbandNodeThe EWSD BroadbandNode is the foundation stone for a futureoriented network in which various types of technology, such as ISDN in the public network (PSTN) and broadband communication, harmoniously operate together through the asynchronous transfer mode (ATM). Broadband technology offers the network operator the opportunity to introduce completely new services, e.g. services with high-quality graphics and multimedia applications as well as videotelephony. In addition, broadband technology can meet subscribers demands for shorter response times for high bit-rate applications.

ATM subscribers and ATM trunks to other broadband networks can be connected cost-efficiently by means of the EWSD BroadbandNode. ATM lines are also available on the remote subscriber concentrators (DLU) and the remote switching unit (RSU).

The EWSD BroadbandNode provides ATM line technology and ATM switching technology alongside narrow-band technology. As a re 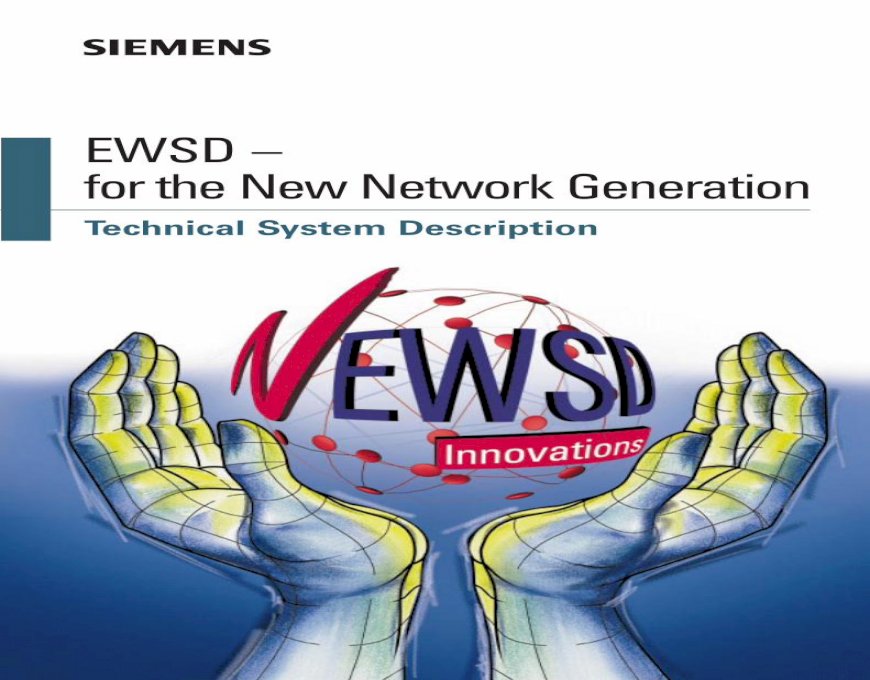