IntroductionqThe generation, transmission and distribution of electric power is accomplished by means of three-phase circuit. qAt the generating station, three sinusoidal voltage have equal magnitude and an equal 1200phase difference between any two phase. qThis is called a balanced source.

The line voltages at the load terminals in terms of the phase voltage are found by application of Kirchhoffs voltage law.

Y-Connected Load (cont.) RMS value of any of the line voltages is denoted by VL, then one of the important characteristic of the Y-connected tree-phase load may be expressed asT h re e - p h a se

-Connected Loads A balanced -connected load (with equal phase impedances) is shown in below:

-Connected Loads (cont.) The RMS of any of the line currents and phase is denoted by IL

relationship between the line currents and phase currents is showing in phase diagram.

exa m p l eA balanced, positive-sequence, Yconnected voltage source with E ab = 480 0 volts is applied to a balanced- load with Z = 30 0 . The line impedance between the source and load is Z = 1 85 for each phase. Calculate L the line current, the -load currents, and the

Instantaneous power has been decomposed into two components. The first component is

Since the average value of this sinusoidal function is zero, the average power delivered to the load is given by

The second component is

The Power Factor (pf) is the cosine of the phase difference between voltage and current. It is also the cosine of the angle of load impedance. The power factor may also be regarded as the ratio of the real power dissipated to the apparent power of the load.

Complex Power For circuits operating in sinusoidal-steady state, real and reactive power are conveniently calculated from complex power, defined below. Complex power S is product of voltage and the conjugate of the current:

Complex Power(cont.) Thus, the complex power designated by S is given by

* its unit is volt-amperes and the larger units areThe

Complex Power(cont.)The Complex Power contains all the information pertaining to the power absorbed by a given load.

Real Power is the actual power dissipated by the load. Reactive Power is a measure of the energy exchange between source and reactive part of the load.

Balanced Three-Phase Power(cont.)So the real power of the three-phase is

The complex three-phase power is or

Balanced Three-Phase Power(cont.)ExampleA three-phase line has an impedance of 2 + j4 as shown in figure below

Unbalanced three phase Y connected load.Line currents DO NOT add up to zero.

THANK YOU FOR YOUR ATTENTION !! 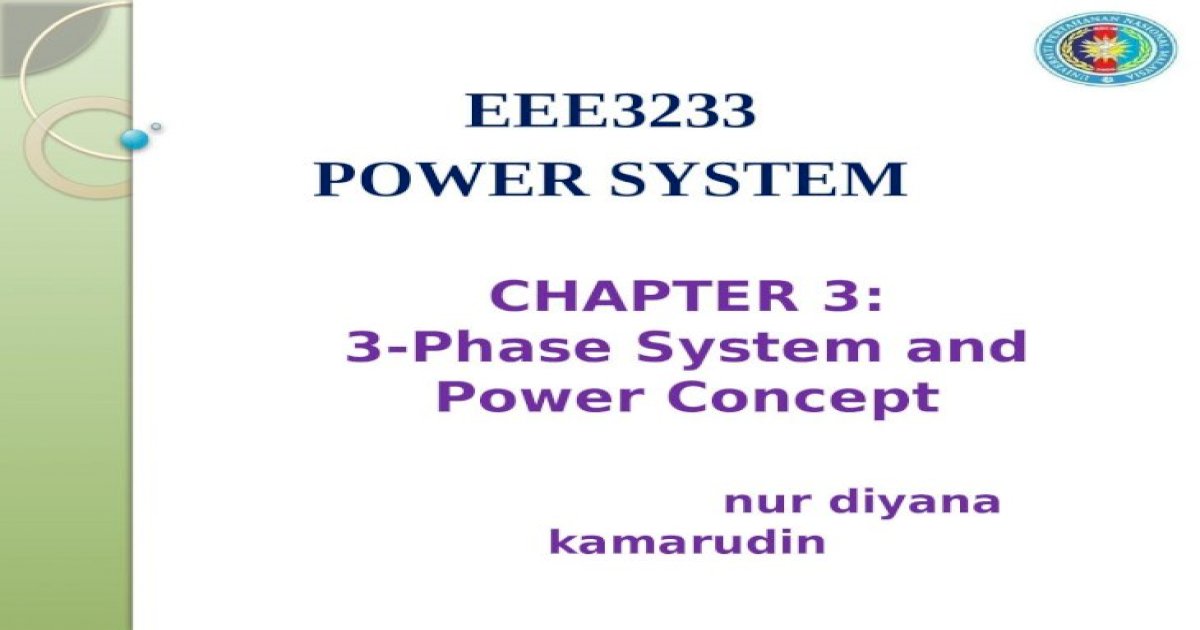