A 'Cinema for the Millions': Soviet Socialist Realism and the Problem of Film Comedy Author(s): Richard Taylor Reviewed work(s): Source: Journal of Contemporary History, Vol. 18, No. 3, Historians and Movies: The State of the Art: Part 1 (Jul., 1983), pp. 439-461 Published by: Sage Publications, Ltd. Stable URL: http://www.jstor.org/stable/260546 . Accessed: 20/05/2012 04:07Your use of the JSTOR archive indicates your acceptance of the Terms & Conditions of Use, available at . http://www.jstor.org/page/info/about/policies/terms.jsp JSTOR is a not-for-profit service that helps scholars, researchers, and students discover, use, and build upon a wide range of content in a trusted digital archive. We use information technology and tools to increase productivity and facilitate new forms of scholarship. For more information about JSTOR, please contact [email protected]

Sage Publications, Ltd. is collaborating with JSTOR to digitize, preserve and extend access to Journal of Contemporary History.

A 'Cinema for the Millions': Soviet SocialistRealism and the Problem of FilmComedyIf the public is not interested in a picture that we produce, it will become boring agitation and we shall become boring agitators. Lunacharsky, 1928l The victorious class wants to laugh with joy. That is its right and Soviet cinema must provide its audiences with this joyful Soviet laughter. Shumyatsky, 19352

When Boris Shumyatsky became head of the newly centralized Soviet film organization, Soyuzkino, in 1930, he set himself the task of developing an apparatus that would produce films that were ideologically correct and acceptable to the Party and its constituent organs. But this ideologically correct cinema had also to be popular with mass audiences if it were to perform its designated function in elevating the cultural level of the masses in the 'Cultural Revolution' that was to accompany the social and economic upheavals of the first Five-Year Plan period from 1928 to 1933. Soviet cinema in the 1930s could not afford the luxury of an artistic avant-garde: it had to provide what Shumyatsky himself came to call a 'cinema for the millions'. Lunacharsky, who, as People's Commissar for Enlightenment from 1917 until his resignation in 1929, had presided over the formative period of Soviet cinema and was thus in effect Shumyatsky's predecessor, had pointed out the political dangers of a remote and unpopular cinema in an important speech to film workers in January 1928 from which I have already quoted in my epigraphs:The cinema public often wants something that it finds especially interestingand if you do not produce a sensation to provide this interest it will not want to eat the dish you offer and will push it away or, if it does eat it, it will only do it very

unwillingly. So we have to combine this interest in film with ideological and artistic consistency. As you will see, this is a very difficult task . . Many of our people do not understand that our film production must whet the public appetite, that, if the public is not interested in a picture that we produce, it will become boring agitation and we shall become boring agitators. But it is well known that boring agitation is counter-agitation. We must choose and find a line that ensures that the picture is both artistic and ideologically consistent and contains romantic experiences of an intimate and psychological character.

In order more fully to understand how the Soviet authorities and their representatives went about organizing a 'cinema for the millions' that would whet the appetite of Soviet film-goers rather than boring the pants off them, we must first of all examine the various factors that affected the development of the Soviet cinema from the Central Committee's resolution of 18 June 1925 'On the Party's Policy in the Field of Literature', which required that literature (and, by implication, all art) must be 'intelligible to the millions',3 to the promulgation of the doctrine of Socialist Realism at the first All-Union Congress of Soviet Writers in AugustSeptember 1934. It is not enough simply to say, as John Grierson once remarked and other writers have assumed, that 'after the first flush of exciting cinema the Russian talent faded'.4 We must, as semiologists are constantly urging us to do and as most of them are singularly incapable of doing, 'construct the viewing context'. Clearly any attempt to systematize historical influences along thematic lines is fraught with dangers: it will tend to oversimplification and repetition. But, if we bear these dangers in mind, it should also offer some clarification: it is therefore worth at least making the attempt. Rather than indulging in a largely chronological narrative history of the period,5 let us therefore look at it thematically. The context of the Soviet cinema in the late 1920s and early 1930s (as indeed at other periods in its history, but these do not directly concern us here) has been formed by four principal factors: the aesthetic, the ideological, the technical and the audience factors. We shall examine them one by one.6 The aesthetic debates among Soviet film-makers in the 1920s are dominated by what amounts to a virtual obsession with the concept of montage and the delineation of the importance of montage is perhaps the most important single legacy of those debates to the development of world cinema. The concept of montage and its significance emerged at an early

stage in the arguments over the legitimacy of cinema as an independent art form. Film-makers saw montage, for which neither painting nor theatre had any equivalent, as the decisive factor that differentiated cinema as a unique and legitimate art form. In particular, montage distinguished cinema from its forerunner, theatre, and this was to prove to be the all-important distinction. As early as 1917, Lev Kuleshov (of whom his pupil Vsevolod Pudovkin rightly wrote later, 'We make films but Kuleshov made cinematography') remarked:The essence of cinema art in the work of both director and art director is based entirely on composition. In order to make a film the director must compose the separate, unordered and unconnected film shots into a single whole and juxtapose separate moments into a more meaningful, coherent and rhythmical sequence just as a child creates a whole word or phrase from different scattered letter blocks.7

He went on to describe this as 'a primitive concept of composition or montage', using the word 'montage' in that context for the first time. A mere few months later he argued that, 'Montage is to cinema what the composition of colours is to painting or a harmonic sequence of sounds is to music'.8 The whole debate about montage in the 1920s flows from these beginnings. The obsession with montage reflected a genuine desire on the part of the new generation of Soviet film-makers to create a new revolutionary art form appropriate to the new revolutionary era. Given that the majority of the older generation of film-makers had fled abroad, these younger men (in some cases as young as 17-18) were to exercise a uniquely powerful influence on the development of Soviet cinema. The phenomenon of cinema had only a recent past: first demonstrated in the mid-1890s, it was, unlike literature or theatre, free of the ideological baggage of past bourgeois traditions. It was the ideal art form with which to start afresh. It was in addition a genuinely popular cultural form. It already had a mass audience, at least in the towns and cities where it was relatively easily available, and its early associations with music-hall and variety theatre strengthened its appeal for those, like the Futurists9 or the Eccentrists,1?who wanted to have done with all traces of the old world and, in particular, anything associated with the notion of 'high culture'. The search to turn cinema into the locomotive of cultural revolution preoccupied not only those film-makers who are best known in the west - Eisenstein, Vertov, Kuleshov, Kozintsev and Trauberg - but also others who are less well known. The films that they produced however were essentially experiments and, on the

whole, they were therefore popular only with the avant-garde both inside and outside the Soviet Union. Those who made Soviet films were concerned above all else to establish cinema (and, more particularly, often their particular genre of cinema) as both a legitimate and independent art form rather than primarily as an effective medium of political communication or propaganda. Towards the end of the 1920s their arguments were becoming more intricate, more incestuous and increasingly more bitter: this led them into a position of some remoteness both from the ideological requirements of the political leadership and from the commercial pressures on the management of Soviet film audiences to satisfy audience demand for diversion and entertainment. It was, however, the advent of sound that destroyed their aesthetic world completely. The prospect of sound cinema seems to have struck terror into the hearts of some and at least anxiety into the hearts of others. It was a reaction that was not unknown elsewhere, but the theoretical implications of sound were more fully appreciated (and thus viewed with greater alarm) in the Soviet Union, if only because greater theoretical attention had been paid there to the essence of cinema as an art form and, as I have already indicated, especially to the characteristics that distinguished cinema from theatre. Montage was the lynchpin of silent cinema and of the argument. Sound cinema re 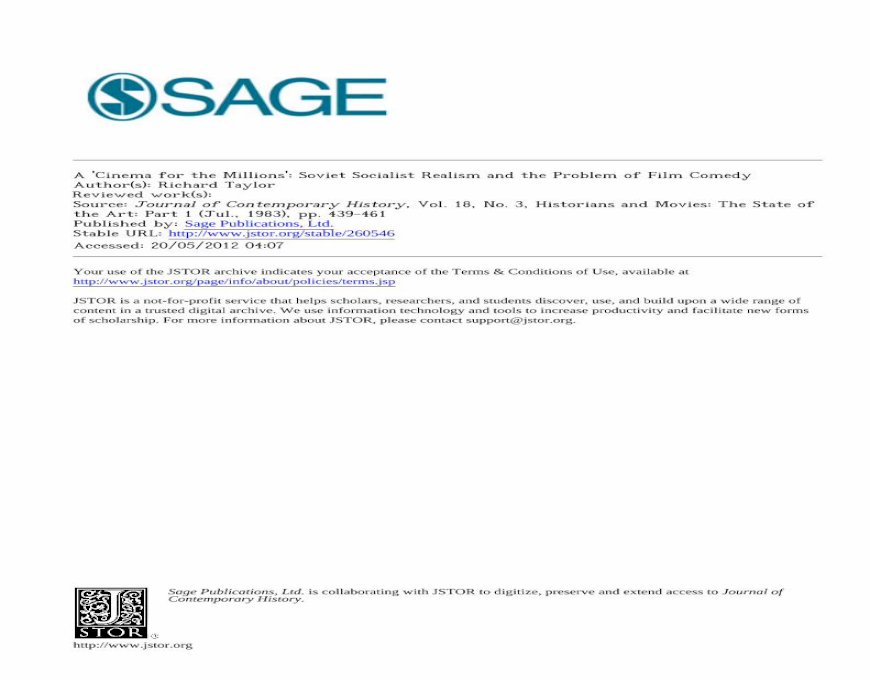 SOCIALIST REALISM AND ETHNOGRAPHY: Body and Technology · PDF file socialist realism? The present work is intended to answer these and other questions . Socialist realism was recognised

Realism. Gustave Courbet and the French Realist painters "[They] call me ‘the socialist painter.' I accept that title with pleasure. I am not only a socialist

A Critical Defense of Socialist Realism

Socialist Realism – the art that replaced constructivism In the early years of the Soviet Union, Russian and Soviet artists embraced a wide variety of

Between Modernism and Socialist Realism: Soviet Architectural · PDF file olize the profession, they formed the Iniciativnaja Gruppa to resist the trend. Their appeal fell on fertile

Perspectives on Socialist Realism vs. The onstructivist’s Realism • Both were focused on what they saw as representing the reality of Soviet life and aimed to shape this reality

Art in Revolution: Soviet Graphics from the Avant-Garde to Socialist Realism February 9-June 4, 2007 This selection of graphic works from The Wolfsonian

NSK: From Hybrid Socialism to Universal Stateworker01.e-flux.com/pdf/article_  · PDF file Socialist Realism: Socialist in content and Realist (in fact, national) in form. This definition