DownloadReport this document
Share this document with a friend
Description:
PowerPoint Presentation On Alzheimer's Disease
Transcript:

2. The Impact of AD Once considered a rare disorder, Alzheimers disease is now seen as a major public health problem that is seriously affecting millions of older peopleand their families. 3. What is Alzheimers disease (AD)? Alzheimers disease is an irreversible, progressive brain disease that slowly destroys memory and thinking skills. Although the risk of developing AD increases with age in most people with AD, symptoms first appear after age 60 AD is not a part of normal aging. It is caused by a fatal disease that affects the brain. 4.

5. Inside the Human Brain To understand Alzheimers disease, its important to know a bit about the brain

6. Inside the Human Brain The Three Main Players

7. Inside the Human Brain The Three Main Players

8. Inside the Human Brain The Three Main Players

9. Inside the Human Brain Other Crucial Parts

In AD, many of these clumps form, disrupting the work of neurons. This affects the hippocampus and other areas of the cerebral cortex. 14.

Neurons have an internal support structure partly made up of microtubules. A protein calledtauhelps stabilize microtubules. In AD,tauchanges, causing microtubules to collapse, andtauproteins clump together to form neurofibrillary tangles. 15. 16. No one knows what causes AD to begin, but we do know a lot about what happens in the brain once AD takes hold. Preclinical AD 17. Mild to Moderate AD 18. Severe AD 19. Types The two main types of AD are early-onset and late-onset:

have identified a gene that produces a protein called apolipoprotein E (ApoE). Scientists believe this protein is involved in the formation of beta-amyloid plaques. 20. Signs and symptoms

26. Mechanism of action: 27. Other pharmacological properties:

Safety and precautions: 48. In market: It is available in the form of capsules, tablets GOTU KOLA - VALLARAI - TABLETS Centella Asiatica IMPCOPS - ORGANIC AND WILD 100 tablets of 500 mg 49. Other herbal drugs: Withania somnifera: 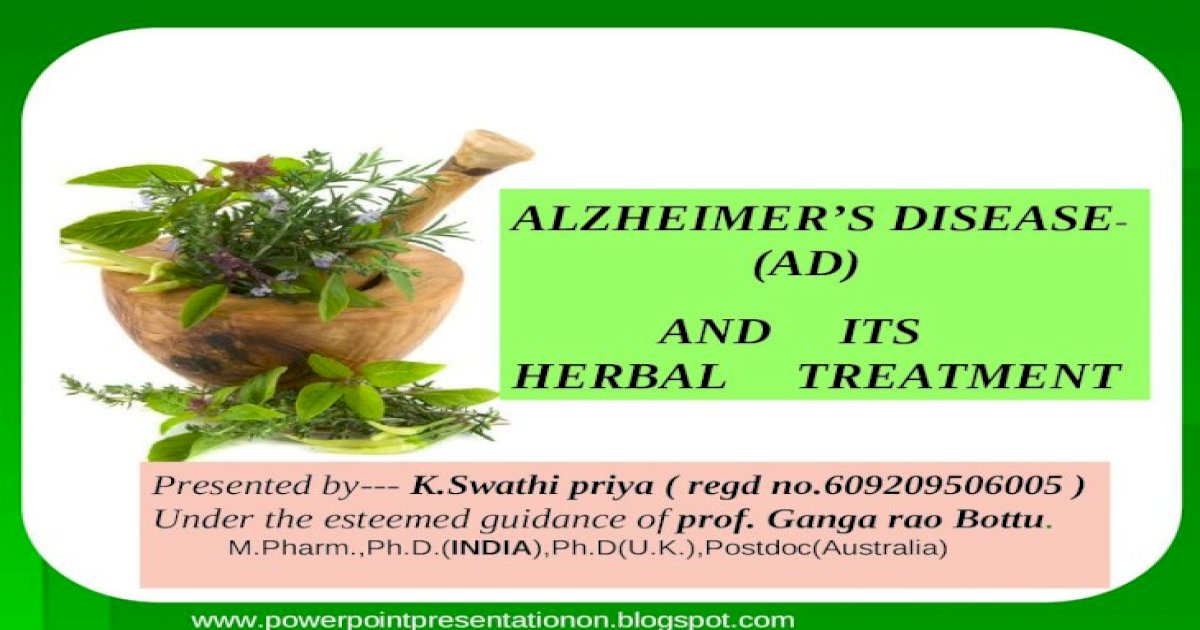 ALZHEIMER’S DISEASE - Boston Alzheimer’s Disease: Unraveling the Mystery Over the past few decades, Alzheimer’s disease has emerged from obscurity.