DownloadReport this document
Share this document with a friend
Description:
A colour-based particle filter can achieve the goal of effective target tracking, but it has some drawbacks when applied in the situations such as: the target and its background with similar colours, occlusion in complex backgrounds, and deformation of the target. To deal with these problems, an improved particle filter tracking system based on colour and moving-edge information is proposed in this study to provide more accurate results in long-term tracking. In this system, the moving-edge information is used to ensure that the target can be enclosed by the bounding box when encountering the problems mentioned above to maintain the correctness of the target model. Using 100 targets in 10 video clips captured indoor and outdoor as the test data, the experimental results show that the proposed system can track the targets effectively to achieve an accuracy rate of 94.6%, higher than that of the colour-based particle filter tracking system proposed by Nummiaro et al. (78.3%) [10]. For the case of occlusion, the former can also achieve an accuracy rate of 91.8%, much higher than that of the latter (67.6%). The experimental results reveal that using the target’s moving-edge information can enhance the accuracy and robustness of a particle filter tracking system.
Transcript: 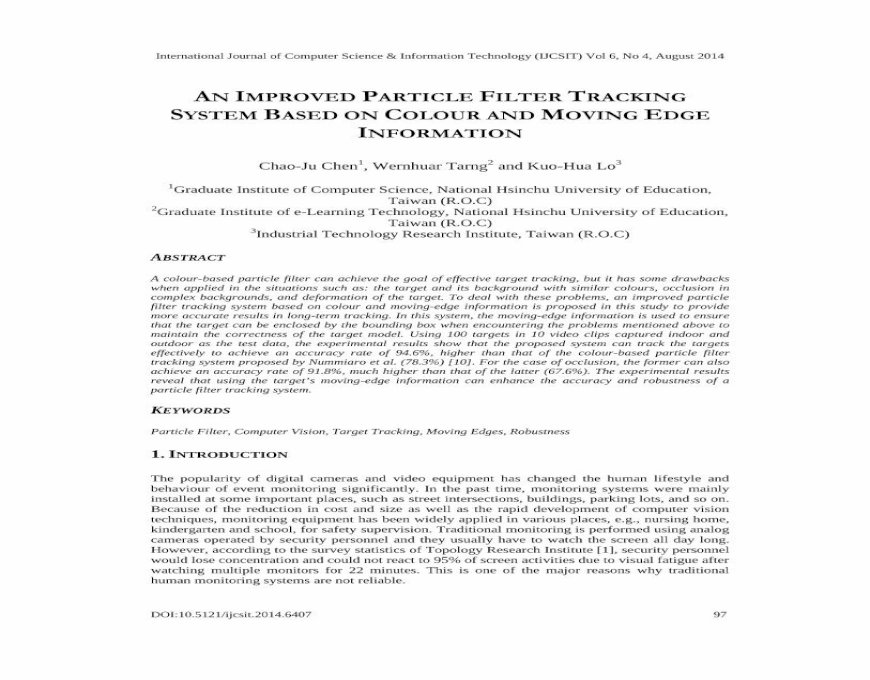 Application of Improved Particle Filter in Multiple ... real-time tracking. In order to speed up the