DownloadReport this document
Share this document with a friend
Description:
While the internet was seen as a utopian platform for free speech and equality when it began to become popularly used in the 1990s, it was evident from the very start that the inequalities that structured ‘real-world’ society had been transferred online. In particular, the online space has long been a difficult place for women to operate. Research has consistently found that women are subjected to more bullying, abuse, hateful language and threats than men when on-line.There is significant debate and discussion about the extent of misogyny on line – and on Twitter in particular – and what might be driving it. Demos ran a series of short studies in order to better understand the volume, degree and type of misogynistic language used on Twitter. Tweets that featured the words 'rape', 'slut' and 'whore' were captured over two short periods during Winter 2013-4 and analysed using natural language processing techniques.This report reveals that of over 100,000 Tweets mentioning 'rape' between 26th Decmber 2013 and 9th February 2014, more than 1 in 10 appeared to be threatening in nature. A high proportion of Tweets containing misogynistc language were judged to be doing so in a 'casual' or metaphorical way. This report also suggests that women are almost as likely as men to use the terms 'slut' and 'whore' on Twitter, and that women are increasingly inclined to use the same derogatory language that has been, and continues to be, used against them. Finally, unusual use of misogynistc terms tends to be in response to events such as television programmes, rather than to rape coverage in the media.
Transcript: 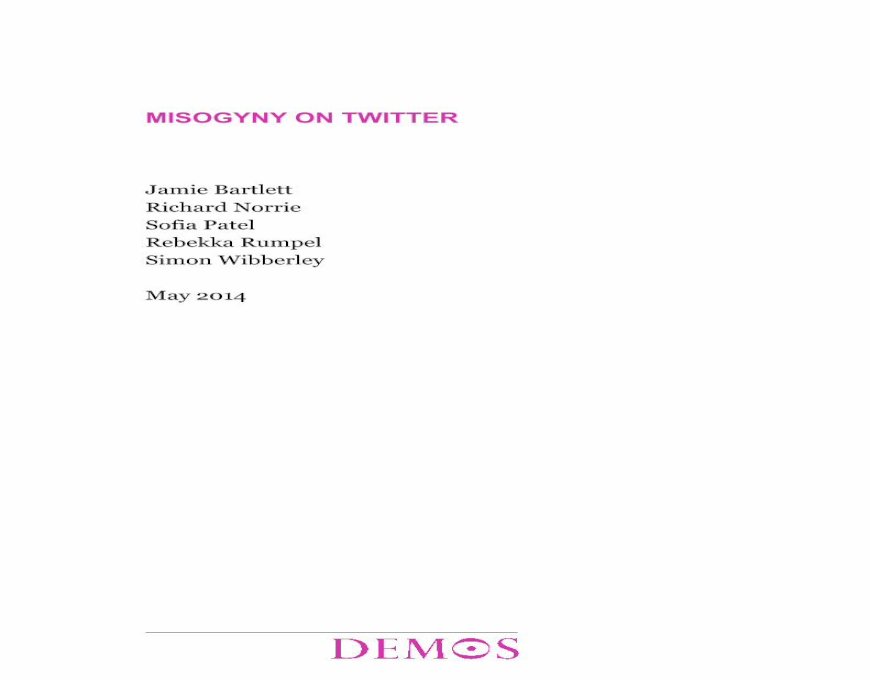 Feminism as Islamophobia: A review of misogyny charges against

MISOGYNY ON TWITTER - Demos · PDF file Misogyny on Twitter 3 INTRODUCTION Misogyny online is an increasing worry. According to authors such as Ellen Spertus (who first wrote about

MISOGYNY ON TWITTER · PDF file Misogyny on Twitter 4 Methodology In study 1, we collected all tweets in the English language which included the word ‘rape’ over the period 26

MICHAEL KING violence Jamie Bartlett · Jonathan Birdwell ... · PDF file feedback throughout, in particular Brett Kubicek. At Demos, thanks are due to several former and current colleagues: