Bearing Witness: Second Generation Literature of the "Shoah" Author(s): Alan L. Berger Source: Modern Judaism, Vol. 10, No. 1 (Feb., 1990), pp. 43-63 Published by: Oxford University Press Stable URL: http://www.jstor.org/stable/1396049 Accessed: 17/02/2010 17:23Your use of the JSTOR archive indicates your acceptance of JSTOR's Terms and Conditions of Use, available at http://www.jstor.org/page/info/about/policies/terms.jsp. JSTOR's Terms and Conditions of Use provides, in part, that unless you have obtained prior permission, you may not download an entire issue of a journal or multiple copies of articles, and you may use content in the JSTOR archive only for your personal, non-commercial use. Please contact the publisher regarding any further use of this work. Publisher contact information may be obtained at http://www.jstor.org/action/showPublisher?publisherCode=oup. Each copy of any part of a JSTOR transmission must contain the same copyright notice that appears on the screen or printed page of such transmission. JSTOR is a not-for-profit service that helps scholars, researchers, and students discover, use, and build upon a wide range of content in a trusted digital archive. We use information technology and tools to increase productivity and facilitate new forms of scholarship. For more information about JSTOR, please contact [email protected]

Oxford University Press is collaborating with JSTOR to digitize, preserve and extend access to Modern Judaism.

The Shoah refuses to disappear. Memories of the monstrous evil unleashed by this fiery cataclysm of history continue to plague its survivors, to vex the religious imagination, and to defy the notion of innocence. This "wound in the order of being," as Martin Buber termed the Holocaust, does not heal. Its effects are seen most profoundly in literary reflections of the Kingdom of Night written by the witnessing generation whose works testify to the sense of cosmic upheaval and covenantal challenge illuminated by the flames of Auschwitz. Indeed, Elie Wiesel has observed that what the survivors "took away from our tales and from our burning houses in European history was the fire."' This literary "fire" illuminates the witnessing generation's determination to tell the tale and, in so doing, to both educate and warn future generations. Consequently, how, and by whom, the Shoah's legacy is assumed touches a multiplicity of concerns: covenantal, historical, literary, and psychological. As the drama of Holocaust literature unfolds, an international literary second generation has begun to transmit the Shoah'smemory with a compelling moral, existential, and religious urgency. Unlike the witnessing generation, however, the second generation lacks direct access to the Holocaust. Thus, their writings weave their parent's memories with their own imagination. The resulting tapestry portrays the Holocaust's profound effect on questions of post-Auschwitz Jewish identity and authenticity. In what follows I discuss the distinction between witnessing and bearing witness, and then investigate the relationship of the symbolism of second generation Holocaust literature to what has recently been termed the "Second Life of Holocaust Imagery." Wiesel's novel The Fifth Son is briefly examined as a transitional work between the first and second generations.2 Next, an analysis of selected examples of American second*An earlier version of this paper was presented at "Remembering for the Future: The Impact of the Holocaust on the Contemporary World." International Scholars' Conference held in Oxford, 10-13 July, 1988. 43

generation literature of the Shoah reveals how memory of the catastrophe is preserved by those born after.3 This literature treats the Jewish issues of covenant fidelity and identity as measured against a holocaustal yardstick. The complex web of family relationships serves as the linchpin for understanding how to read literature written by those whom the literary critic Alvin Rosenfeld described as the kinds of survivors, "those who were never there but know more than the outlines of the place."4 It is within the family structure that one notes the full dimensions of the contemporary problematic of Jewish identity: images of survivors, covenantal questioning, and the Jewish future. The paper concludes with an attempt to assess the possible theological meaning of these issues as the literary future of the Holocaust in American novels grows in importance.

I. WITNESSING AND BEARING WITNESS

The distinction between a witnessing generation and those who come after, but are commanded to witness, is firmly rooted in Jewish history and liturgy. Addressing this problematic, the late novelist and theologian Arthur A. Cohen wrote: The Passover Haggadah commands that every Jew consider himself as though he has gone forth in exodus from Egypt. The grammatical authority of the Haggadah makes clear that this is no metaphor, whatever our wish to make apodictic language metaphoric. The authority is clear: I was really, even if not literally, present at Sinai. God contemplated my virtual presence then, thirty-odd centuries ago. The fact that history could not prevision and entail my presence is irrelevant. No less is it the case that the death camps account my presence really, even if not literally: hence my obligation to hear the witnesses as though I were a witness. It is mandatory that this real presence of all Israel in the death camps, experiencing the tremendum(Shoah),enter the liturgy as surely as it entered the narration of the Exodus.5 Cohen's distinction between those who were literally and those who were really present at the time of orienting events in the life of the tradition establishes a liturgical and philosophical basis for writings by nonwitnesses. This distinction is refined in the writings of Wiesel. On the one hand, he insists on the singularity of the victims' experience. Works such as "A Plea for the Dead" (1967), and "A Plea for the Survivors" (1977) bear eloquent testimony to this view. Yet, on the other hand, Wiesel asserts the necessity for all Jews to bear witness to the Holocaust. This witness bearing constitutes, for Wiesel, the touchstone of Jewish and human authenticity. He writes:

Wiesel's call for bearing witness transcends spatial and temporal borders, suggesting that there are concentric circles of witnesses. Some of them are literal survivors; some of them are their children; others are their friends and family; while still others are members of the House of Israel. But all of them are linked by a common destiny. Just as in the hasidic world which he so admires there were concentric circles of hasidim who formed around their rebbe, some living in the master'shouse, others who lived in the area, and still others who made only occasional trips to see and hear the rebbe, so, too, after the Holocaust there are circles of witnesses; some are closer than others to the Event, but all are capable of being transformed into witnesses by hearing the survivors' tales. In thewords of Ellen Fine "... to listen to a witness is to become one."7

The task of bearing witness is a normative element of Jewish existence. Scripturally sanctioned, see especially Joel (1:3), witness bearing has become integral to living one's life as a covenanted Jew. In the case of second generation Holocaust literature, this act becomes a moral and theological imperative. The survivors are slowly disappearing and the solemn task of transmitting their legacy is being assumed by the second generation. The literature being written by survivors' children comprises a unique genre in its reaction to their parents' tragedy. This literature is in fact one response to Yehuda Bauer's observation that the "crucial problem is how to anchor the Holocaust in the historical consciousness ofthe generations that follow it."8

Second generation Holocaust writers occupy a distinctive position. Despite their various orientations to Judaism and other differentiating factors, as children they were all "witnesses to their parents' ongoing survival."9 Consequently, while not having personally experienced the Shoah, these "second generation survivors" constitute the group of nonwitnessing American Jews most intimately familiar with its continuing effects. Their parents' Holocaust experience indelibly stamped the survivors both with certain assumptions concerning society and with the need to maintain those coping strategies which enabled them to survive the Holocaust.10Second generation Holocaust writing is simultaneously a recapitulation of the parents' experience and a telling of how the Shoah

is viewed as an orienting event by the children of survivors. However discrete the stories are, inevitably they become linked. Wiesel has captured the relationship between survivors and their offspring in the utterance of Ariel, a child of survivors and the central character in The FifthSon. Ariel exclaims that survivors' tales "fuel my imagination." The second generation autobiographies, biographies, novels and short stories of writers such as Carol Ascher, Barry Lane, BarbaraFinkelstein, Thomas Friedmann, Michael Kornblit, Sonia Pilcer, David Preston, Lev Raphael, Lore Segal, Julie Salamon, Art Spiegelman, and Ellen Summers all attest to the Shoah'scontinuing presence. Collectively, second generation Holocaust literature ex 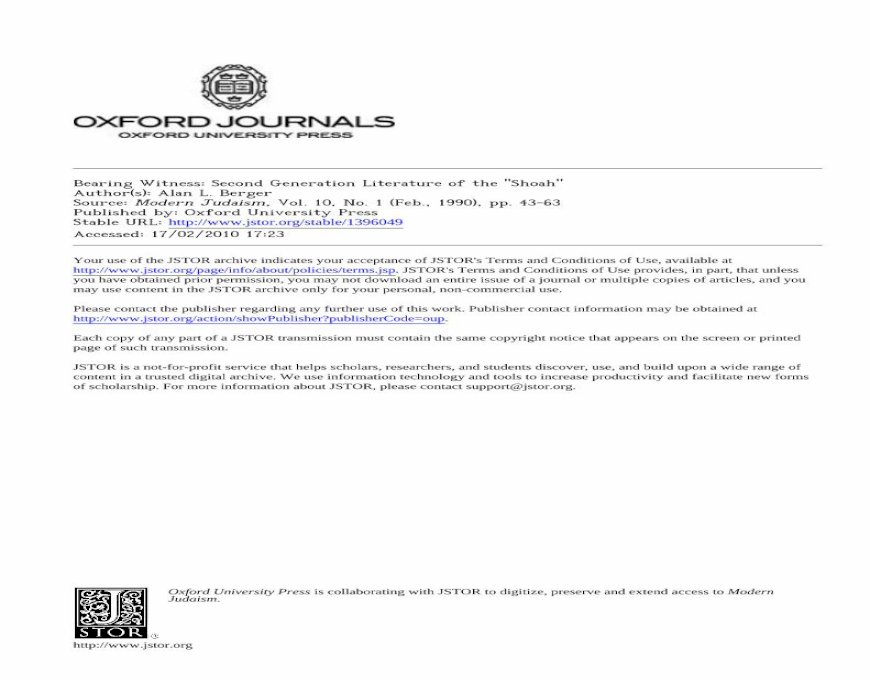