Can a brain drain be good for growth in the source economy?Andrew Mountford *Department of Economics, Southampton University Southampton S017 1BJ, UK

Abstract This paper analyzes the interaction between income distribution, human capital accumulation and migration. It shows that when migration is not a certainty, a brain drain may increase average productivity and equality in the source economy even though average productivity is a positive function of past average levels of human capital in an economy. It is also shown how the temporary possibility of emigration may permanently increase the average level of productivity of an economy. 1997 Elsevier Science B.V.JEL classification." O15; 040 Keywords: Brain drain; Growth

I. Introduction What is the economic rationale for allowing a limited amount of emigration through an exit visa policy? Will permitting some of an e c o n o m y ' s most educated inhabitants to emigrate, always be bad for an e c o n o m y ' s level of per capita output? The recent emphasis on the importance for economic growth of the average level o f human capital in an economy has led many to presume that a 'brain drain' may leave a developing country in a poverty trap. The intuition being that the average level of human capital in a developing country will not grow because the developed world will 'siphon off' its highly educated workers, thus increasing the productivity of the developed world at the expense of the develop-

ing economy. This paper shows that when educational decisions are endogenous and if successful emigration is not a certainty, a brain drain may increase the productivity of a developing country. This paper discusses two ways that a brain drain can beneficially effect growth. In Section 2 it is shown how the possibility of migration to a higher wage country raises the return to education. This leads to an increase in human capital formation which can outweigh the negative effect of the brain drain itself. Another avenue for the possible beneficial effects of a brain drain is its effect on the endogenous formation of 'educational classes' in an economy. Section 3 shows how a brain drain can change the dynamics of 'class' formation so that an 'under-educated' class fails to develop. It is shown that this can be a very large effect indeed. An implication of this model is that policy makers in an economy where skilled workers want to emigrate, will not want to completely prohibit the emigration of its skilled workers. There will be an optimal level of emigration which weighs the benefits of emigration, due to increased incentives for skill accumulation, with the costs of the skill depletion of a 'brain drain'. This model thus provides a theoretical reason for the use of emigration quota policies, for example in the old Soviet Union and in present day China. This paper is chiefly related to two literatures, the growth and human capital accumulation literature and the migration and brain drain literatures. Since the seminal article of Lucas (1988), the endogenous growth literature has investigated, both empirically and theoretically, the importance for growth of human capital accumulation. Empirically, Barro (1991) and Mankiw et al. (1992) have shown that the level of schooling across countries is a significant variable for explaining differences in growth rates across countries. Theoretically, in addition to the large number of representative agent models, Galor and Zeira (1993) and Galor and Tsiddon (1994) have recently described economies where the level of education differs endogenously across agents and have investigated the growth implications of the distribution of education levels in an economy. This paper continues this research direction by investigating the implications of migration in a model where education levels differ across agents. The brain drain literature is a branch of the migration literature which has investigated the impact of migration when agents are not homogeneous, see for example Bhagwati and Hamada (1974). The three most related articles to this paper are the article of Miyagiwa (1991) on the brain drain and the papers of Galor and Stark (1990, 1991) on capital accumulation and return migration. Miyagiwa's paper concentrates on the effect of scale economies on migration. It shows how a large economy will attract a small economy's most able workers, when the productivity externality is dependent upon the number of educated people in an economy, and thus that a brain drain will necessarily reduce the productivity in the original country of the emigrants. Galor and Stark show how the possibility of enforced return migration back to a lower wage economy will cause the saying's rate of a migrant to be higher than that of an indigenous worker.

This paper applies this idea of probabilistic migration to the obtaining of emigration or immigration visas and analyzes its impact on educational choices. This paper is organized as follows. In Section 2 we abstract from income distribution dynamics by exogenously fixing the number of 'educational classes' to two. It is thus shown, even without non-marginal changes in the income distribution, that a brain drain can increase per capita income in the source economy. In Section 3 the number of 'educational classes' in an economy is endogenized and it is shown how migration can effect the income distribution dynamics of a source economy. It is thus shown how a brain drain can have large (non-marginal) and positive effects on the level of per capita income in the source economy.

2. The effect of a brain drain on educational incentives

The model in this section is a simple version of the model of the brain drain and human capital formation by Miyagiwa (1991). The model analyzes a small open overlapping generations economy existing in a world where there is one good and perfect capital mobility. The world's one good is produced under constant returns to scale by two factors, capital and efficiency units of labor. There are a continuum of agents in each generation. For simplicity we normalize the measure of agents in each generation to unity. Population growth is excluded but could be trivially added. In this model the education decision is a discrete either/or choice and by construction there will always exist two 'classes' of agents, the educated and the uneducated. This model shows how a brain drain can be beneficial to the productivity level of the source economy when there is a 'growth externality' associated with the proportion of educated workers in the economy in the previous period. A sufficient condition for the existence of an optimal level of emigration or exit visas is also derived.

2.1.1. Production of goods and factor prices The total amount of capital and efficiency units of labor in time period t, are denoted by K t and Lt, respectively. The productivity of labor, or the state of the technology, in period t is given by At. Production is generated by a constant returns to scale production function. The output produced at time t, Y~, isKt

W e make the standard assumptions about this function, namely

Factor prices are determined in the standard way by the factor's marginal product, thus the net return to capital r t is equal t o f ' ( k t) -+- (1 - t~) where 6 is the rate of depreciation of the capital stock. It is assumed for simplicity that the world is in a steady state equilibrium and thus that the world net rate of retum, r *, is constant. Due to perfect capital mobility and the smallness of the economy, this fixes the domestic net rate of return to capital, r t, equal to r * and thus fixes the domestic capital to efficiency labor ratio, kt, a s well. Thus, we will write k t = k Vt where k is a constant. Given the level of technology At, k determines the wage rate per efficiency unit of labor, w(k)

2.1.2. The distribution of abilityIndividuals possess different levels of latent ability, where e i denotes the latent ability level of individual i. These latent abilities are assumed to be distributed over the closed interval [0,E] according to the density function g(ei), where by definition

2.1.3. Individuals' education decisionAgents exist in an overlapping generations world and live for three periods, deriving utility only from third period consumption. 1 In their first period of life agents can invest resources in education. They have no resources of their own, so they must borrow from the capital market at the w o r l d ' s rate of interest, r *. The 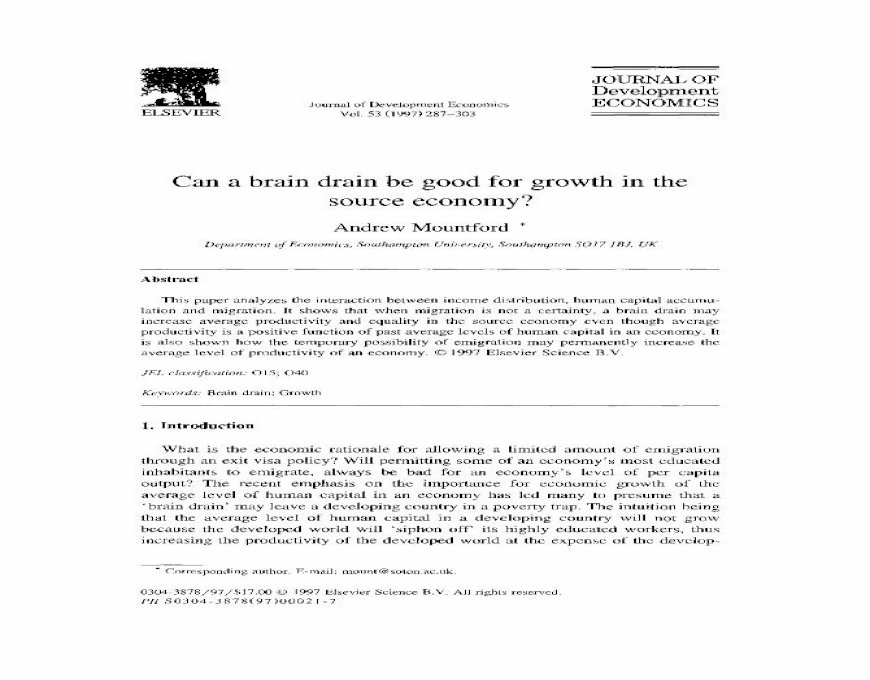