The brucellae are a-Proteobacteria facultative intracellular parasites that cause an important zoonosis. These bacteria escapeearly detection by innate immunity, an ability associated to the absence of marked pathogen-associated molecular patternsin the cell envelope lipopolysaccharide, lipoproteins and flagellin. We show here that, in contrast to the outer membraneornithine lipids (OL) of other Gram negative bacteria, Brucella abortus OL lack a marked pathogen-associated molecularpattern activity. We identified two OL genes (olsB and olsA) and by generating the corresponding mutants found that olsBdeficient B. abortus did not synthesize OL or their lyso-OL precursors. Liposomes constructed with B. abortus OL did nottrigger IL-6 or TNF-a release by macrophages whereas those constructed with Bordetella pertussis OL and the olsB mutantlipids as carriers were highly active. The OL deficiency in the olsB mutant did not promote proinflammatory responses orgenerated attenuation in mice. In addition, OL deficiency did not increase sensitivity to polymyxins, normal serum orcomplement consumption, or alter the permeability to antibiotics and dyes. Taken together, these observations indicatethat OL have become dispensable in the extant brucellae and are consistent within the trend observed in a-Proteobacteriaanimal pathogens to reduce and eventually eliminate the envelope components susceptible of recognition by innateimmunity.

Copyright: 2011 Palacios-Chaves et al. This is an open-access article distributed under the terms of the Creative Commons Attribution License, which permitsunrestricted use, distribution, and reproduction in any medium, provided the original author and source are credited.

Competing Interests: The authors have declared that no competing interests exist.

. These authors contributed equally to this work.

The members of the genus Brucella are a-2 Proteobacteria thatcause brucellosis, an important disease affecting livestock and wild

life as well as human beings. These bacteria trigger only low

proinflammatory responses in the initial stages of infection and,

accordingly, they follow a stealthy behavior that allows them to

activation. The outer membranes (OM) of brucellae are of critical

importance in this strategy. Whereas most gram-negative have

terns (PAMP) recognized by innate immunity, at least the Brucella

abortus and B. melitensis have OMs that are unusually resistant to thedisrupting action of bactericidal peptides and complement. Thus,

glycan or DNA are not readily accessible to pathogen recognition

receptors [1,38]. The Brucella LPS is clearly implicated in theseproperties and there is evidence that other lipid molecules also

contribute. Brucella OMs contain large amounts of phosphatidyl-choline (PC) and blockage of the synthesis of PC with the

relatively large amounts in Brucella [11] and, although they have

interesting properties in other bacteria, have not been investigated.

between these amino lipids and the resistance to bactericidal

peptides [12,13]. Moreover, OLs of Bordetella pertussis, Flavobacteriummeningosepticum and Achromobacter xylosoxidans display antagonisticeffects on LPS endotoxicity as well as proinflammatory and

inflammatory activity [1418]. Such an activity in Brucella OLwould be in apparent contradiction with the furtive behavior of

these bacteria with respect to innate immunity. Therefore, it was

biological activity different from that of other OLs, including the

OLs are OM components of B. abortusTo determine the cellular localization of OLs, we first examined

the free-lipids in virulent S B. abortus 2308 NalR grown in trypticsoy broth to the stationary phase, in the OM fragments released

spontaneously during growth [19] and in non-delipidated B. abortusLPS [20]. Thin-layer chromatography of the corresponding

of OLs in B. abortus and showed their enrichment in the OMfragments (Figure 1 A), thus demonstrating that they are OM

components. Although in amounts lower than PE, OLs were also

detected in non-delipidated B. abortus LPS suggesting anassociation in the OM (Figure 1 A). The levels of OLs did not

B. abortus OLs are synthesized through a two steppathway

We searched the B. abortus 2308 genome for orthologs of thegenes involved in OL synthesis in other a-2 Proteobacteria. InSinorhizobium meliloti, OlsB acylates the ornithine a amino groupwith C18:0(3-OH) and OlsA generates the acyloxyacyl group by

esterification with C18:0 (Figure 1 B) [23,24]. In Rhizobium tropici,an additional gene (olsC) codes for an oxygenase that generates a 2-hydroxy substitution on the ester-linked acyl group [25] (Figure 1

hypothetical protein) codes for a protein with 55% identity and

66% similarity with OlsB, and that the product of ORF

BAB1_2153 (annotated as a phospholipid-glycerol acyltransferase)

has 45% identity and 61% similarity with OlsA. Moreover, we

located similar ORFs in the genomes of B. melitensis 16M and B.suis 1330 (http://www.ncbi.nlm.nih.gov/genomes/lproks.cgi).ORF BAB1_0147 (henceforth BABolsB) maps as an isolated gene.BAB1_2153 (henceforth BABolsA) is in a possible operon formedby at least BAB1_2151 (putative glycoprotease), BAB1_2152

thetical protein; the stop codon of BAB1_2152 and the start codon 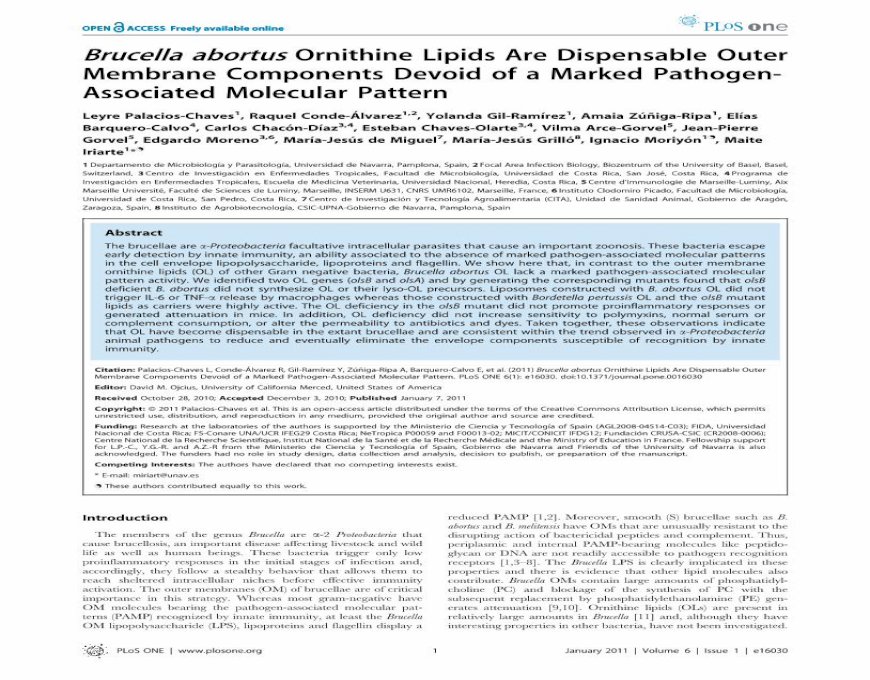 Hepatocellular Adenoma in a Patient with Ornithine ... Ornithine transcarbamylase (OTC) is located within