Home >Documents >Brucella abortus Transits through the Autophagic Pathway and...

Brucella abortus Transits through the Autophagic Pathway and...

Brucella abortus is an intracellular pathogen that replicates within a membrane-bounded compartment. Inthis study, we have examined the intracellular pathway of the virulent B. abortus strain 2308 (S2308) and theattenuated strain 19 (S19) in HeLa cells. At 10 min after inoculation, both bacterial strains are transientlydetected in phagosomes characterized by the presence of early endosomal markers such as the early endosomalantigen 1. At ;1 h postinoculation, bacteria are located within a compartment positive for the lysosome-associated membrane proteins (LAMPs) and the endoplasmic reticulum (ER) marker sec61b but negative forthe mannose 6-phosphate receptors and cathepsin D. Interestingly, this compartment is also positive for theautophagosomal marker monodansylcadaverin, suggesting that S2308 and S19 are located in autophagicvacuoles. At 24 h after inoculation, attenuated S19 is degraded in lysosomes, while virulent S2308 multiplieswithin a LAMP- and cathepsin D-negative but sec61b- and protein disulfide isomerase-positive compartment.Furthermore, treatment of infected cells with the pore-forming toxin aerolysin from Aeromonas hydrophilacauses vacuolation of the bacterial replication compartment. These results are compatible with the hypothesisthat pathogenic B. abortus exploits the autophagic machinery of HeLa cells to establish an intracellular nichefavorable for its replication within the ER.

Recent developments in the cell biology of intracellularpathogens have started to explain the strategies that microbesuse to infect and develop within their host. Among them, Bru-cella spp. are gram-negative facultative intracellular pathogensthat cause brucellosis, a widely distributed zoonose affecting abroad range of mammals, ranging from dolphins and domesticanimals to humans (24). Brucella remains endemic in manydeveloping countries, where it causes important economiclosses (77). Brucellosis in humans is a debilitating disease withdiverse pathological manifestations, including fever and weak-ness, leading to endocarditis, arthritis, meningitis, osteoarticu-lar complications, and neurological disorders in chronic cases(12, 37). In domestic species, including cattle, sheep, and goat,the pathology is characterized by abortion due to colonizationof the placenta and fetal tissues in females and by sterility inmales (65).

Members of the genus Brucella are closely related to plant oranimal pericellular or intracellular pathogens, like Agrobacte-rium, Rhizobium, and Bartonella species (47). Brucella abortusis able to multiply within a membrane-bounded compartmentin phagocytic (5) and non-professional phagocytic (16, 17)cells. Indirect evidence suggested that brucellae inhibit the fu-

sion between phagosomes and lysosomes (26). Ultrastructuralwork has shown that multiplying bacteria are located in aribosome-lined organelle that resembles the endoplasmic re-ticulum (ER) (2, 16, 17, 44). More recently, we showed thatB. abortus distributes in autophagosome-like vacuoles (53).However, the characteristics of the compartments used by thebacteria during early phases of invasion and the molecularcharacteristics of Brucella-containing phagosomes have notbeen described yet.

To date, many intracellular pathogens are known to block orto alter the traffic and/or maturation of their membrane-boundcompartments within host cells (25, 52, 63). Membrane trafficwithin the phagocytic cascade is a complex process. Early mod-els in which phagosomes fuse with lysosomes to become aphagolysosome have been complemented by other models fa-voring the idea that phagosomes mature progressively beforefusing with lysosomal compartments (6, 68). From a growingbody of work on phagosome biogenesis, the most useful infor-mation for subsequent comparison with vacuoles containingpathogens has come from the molecular characterization ofphagosomes containing inert beads or fixed particles (8, 15,68). In phagocytic cells, plasma membrane proteins are largelyremoved from inert particle-containing phagosomes within thefirst minutes of internalization (49). The presence of the mo-nomeric GTPase rab5 in phagosomes attests to interactionsbetween early endosomal compartments and the phagocyticpathway (14, 43). The maturation of early phagosomes intolate phagosomes is then revealed by the loss of markers fromearly endocytic organelles and the acquisition of markers fromlate endocytic organelles, such as the GTPase rab7 or themannose 6-phosphate receptors (M6PRs) (14, 51, 56). Merg-

ing with the lysosomal compartment is shown by the steadyaccumulation of lysosomal proteins such as the acid hydrolasecathepsin D or the lysosome-associated membrane proteins(LAMPs) on phagosomes (14, 49).

Intracellular pathogens are known to modify their environ-ment in multiple ways to avoid degradation by innate host celldefense systems. In professional phagocytes, Mycobacteriumremains within an early endosomal compartment (10, 11) thatexcludes the vacuolar ATPase, thus inhibiting the acidificationof the bacterial phagosome (69). Legionella pneumophila asso-ciates to autophagosomes and takes advantage of the auto-phagic machinery of host cells to multiply within a ribosome-studded organelle surrounded with ER (71), rarely interactingwith the endosomal cascade (61). In nonphagocytic cells, Chla-mydia trachomatis inclusion bodies segregate completely fromthe endocytic pathway (31, 72) and may represent an aberrantcompartment of the trans-Golgi network from where the bac-terium induces the incorporation of sphingolipids into thepathogen-containing vacuole (30), which is formed mainly ofproteins of chlamydial origin (58). Coxiella burnetii multipliesin a compartment that acidifies (55) and induces fusion of hostcell lysosomes (42). Salmonella typhimurium bypasses late en-dosomal compartments and is targeted to vesicles containinglysosomal membrane glycoproteins, probably as a consequenceof direct delivery from the trans-Golgi network (28). The pro-

tozoan Toxoplasma gondii actively invades host cells (18) andmultiplies in a fusion-incompetent parasitophorous vacuolethat is derived from the host plasma membrane (70) and as-sociates with host mitochondria and ER (64). The eucaryoticunicellular flagellate Trypanosoma cruzi recruits lysosomes atits site of entry (73): once inside the host cell, the parasite isable to degrade the lysosomal membrane, allowing free rep-lication in the cytosol (3). In contrast, Shigella flexneri andListeria monocytogenes are not targeted to lysosomes but arealso able to lyse their internalization compartment and rep-licate in the cytoplasm of infected cells (27, 32), both beingcapable of intracellular movement by actin-based propul-sion (19, 50).

We have previously observed that Brucella is able to invadeHeLa cells and that the virulent strain 2308 (S2308) distributesin a multimembrane, ribosome-associated compartment (53).In the present study, we detail the intracellular traffic of bothvirulent and attenuated Brucella strains in HeLa cells, and weshow that both strains are able to associate with autophago-somes bypassing late but not early endosomal compartments.At later infection times, the virulent strain is delivered to thehost ER, where massive intracellular bacterial replication oc-curs, whereas the nonpathogenic strain is degraded after fusionof its vacuole with lysosomes.

FIG. 1. EEA1 is detected in Brucella-containing phagosomes. HeLa cells were inoculated with S2308 or S19 or were fed with latex beads for different times up to20 min and then were processed for single (latex beads) or double indirect immunofluorescence (for incubation times longer than 20 min, cells were washed and furtherincubated with fresh cell culture medium containing gentamicin). (A) Distribution of EEA1 (lower panels) and latex beads, S19, and S2308 (upper panels) at 10 minafter internalization. (B) Kinetics of acquisition of EEA1 by phagosomes. Internalized particles are labeled by EEA1 (arrows in panel A), with a maximal acquisitionof EEA1 at 10 min postinoculation (B). In panel B, data are averages from two different experiments. The percentage of phagosomes containing EEA1 was calculatedas described in Materials and Methods. Bar, 5 mm. 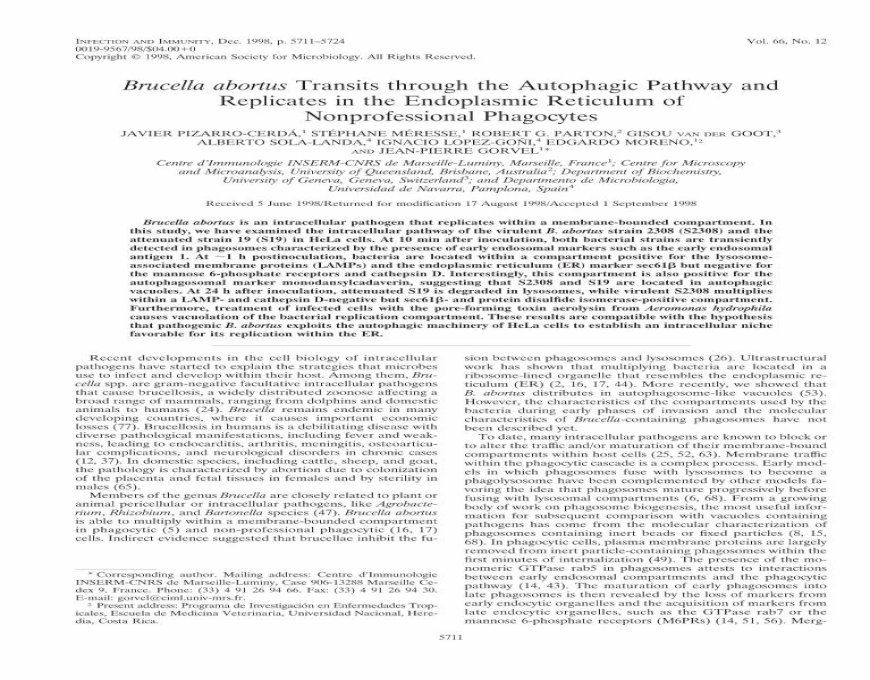 Isolation of Brucella abortus ssb and uvrA genes from a genomic

Brucella abortus 2012 - brucellosis, and all bacteriological and serological investigations were negative

Brucella - ... Bovine brucellosis caused by Brucella abortus is still the most widespread form, although