CULTURAL REVOLUTION, COLLECTIVIZATION, AND SOVIETOINEMA: EISENSTEIN'S OLD AND NEW AND DOVZHENKO'S EARTHby Paul E. Burns Old and New (1929) and Earth (1930) were the last silent films made by two world-renowed Soviet directors, Sergei Eisenstein and Alexander Dovzhenko respectively. The films deal with the Soviet village during the collectivization of agriculture under the First Five-Year Plan. Most Western discussions of these works concentrate on their directors' unique contributions to filmmaking methodology, and in Eisenstein's case, to film theoryJ Old and New and Earth are indeed distinguished examples of film art, but they are also graphic statements of the contemporary concerns and pressures of a society in unprecedented and mind-boggling flux. This essay focuses on the historical context of collectivization and cultural revolution as a key to understanding their ideological content and as a means of illustrating the interaction of Soviet cinema and society. The cultural revolution which accompanied and assisted "the great turning point" of the First Five-Year Plan in Soviet Russia has recently received systematic analysis by a group of Western scholars.^ Instead of viewing the period of the First Five-Year Plan as a transition from the tolerant and culturally diverse years of the New Economic Policy (19211928) to the repressive and culturally stagnant era of Stalin's "socialist realism," they see the cultural revolution of 1928-1931 as a discrete phenomenon with its own special characteristics. Cultural revolution was the counterpart to rapid industrialization and forced collectivization of agriculture; it reflected the economic and social transformation, but was also intended to foster that transformation. While it was to raise Paul Ei Bums is a member of the history department at the University of Nevada at Las Vegas.. 84

the general cultural level of the masses (as Lenin had intended), it was also to advance the working class and Communist youth and introduce a militantly proletarian culture (not envisioned by Lenin), In the crucible of Stalin's revolution, no art form was free from the political pressure to produce works of relevance and ideological correctness. Major Soviet films of the 1920s had already broken with the canons of the bourgeois cinema. Absence of a star system, elevation of the masses or their representatives as hero, eschewal of romantic plots, and positive treatment of revolutionary subjects characterized the avantgarde. But while such revolutionary epics as Potemkin, Mother, The End of St. Petersburg, October, and Arsenal had astounded international film circles, imported entertainment films were the most popular fare of Soviet audiences. As the regime geared up for the First Five-Year Plan, it sought to marshal cinema's mass communication potential. At a Party conference on cinema held in March 1928, A. I. Krinitsky, head of the agitprop department of the Central Committee, characterized the cinema as "one of the most powerful instruments of the struggle for cultural improvement, an enormous factor in the cultural revolution and the socialist transformation of the country."-^ He praised the depiction of the Revolution in Soviet films for giving "a class assessment of historical events," but lamented the lack of worthwhile films on the problems of contemporary Soviet life, such as "the union [smychka] of the workersand the peasants" and "the fight for collective forms of agriculture."^ While he called for films "comprehensible to the millions," he also urged the Soviet cinema not to "follow in the wake of the audience...it must lead the audience, support the beginnings in it of the new man..."^ In no other area of Soviet life was it so difficult for the cinema to lead and be "a means of agitation for the current slogans of the Party"^ than it was in agriculture. The collectivization of Soviet agriculture followed a tortured path, both in its conception and in its execution. Individual peasant farming was the centerpiece of Lenin's New Economic Policy, and it had led to recovery of Russia's shattered economy.. But when the decision to rapidly industrialize was made after long debates in 1927-28, the leadership assumed that the necessary resources for industrial investment would be extracted from the peasantry. Low prices created a crisis in grain procurement during the winter of 1927-28, and Stalin responded with a campaign of forced requisitions and outcries against "kulak speculators." While coercion was officially termed "extraordinary," or temporary, and the NEP was reaffirmed, grain shortages recurred in 1928-29. The First Five-Year Plan, which was formally adopted in the spring of 1929, projected increased agricultural production by the 85

gradual but dramatic growth of collective farms to include 20 percent of the peasantry by 1932. Impressive growth of collective farms, or kolkhozes, during the summer and early fall of 1929 was based primarily on the poor peasant. Believing that inclusion of the middle peasant was essential and heartened by the earlier successes, the regime embarked during the winter of 1929-30 on a frenzied assault to "liquidate the kulaks [rich peasants] as a class." By March 1, this effort yielded a staggering 55 percent of the peasantry in collectives. The resulting chaos and destruction caused Stalin on March 2 to issue his famous "Dizziness from Success" article in Pravda, in which he proclaimed victory, but also decried the overzealousness of some officials. Collectivization statistics plummeted from over fourteen million to under six million on May 1, but the goal remained unaltered and by the end of 1932 60 percent of peasant families were reported collectivized.' Political control, famine, and economic disaster were the results. As the collectivization campaign raged in the countryside and the attendant cultural revolution took shape, the film industry struggled to assume its place in the arsenal of Soviet arts. Film journals detailed cinema's proper relationship to these two phenomena. "Cinema in the Service of Collectivization" described educational productions with such titles as Towards the Spring Sowing, Weeds and Measures for Combatting Them, Diseased Bread, and Introducing High Quality Seeds.^ "Sound Cinema in the Service of the Cultural Revolution" and "For a Marxist Film Criticism" dealt with the problems and prospects of creating a proletarian culture.9 The "cinema front" could be anywhere, including the regime's renewed attack on religion. The Moscow Provincial Soviet organized a traveling anti-religious cinema, and some former churches were used as movie houses.^^ In this politically charged and ideologically sensitive atmosphere, Eisenstein and Dovzhenko offered their contributions to collectivization and the cultural revolution. Prior to resuming work in 1928 on his agricultural film, Eisenstein wrote an essay included in a volume on Soviet arts published in the United States in 1930. In it he said: In the Soviet Union art is responsive to social aims and demands. One day, for example, all attention is centered on the village; it is imperative to raise the village from the slough of ancient custom and bring it into line with the Soviet system as a whole... The slogan is: "Face the Village!" The smichka, the union of proletarian and poor peasant is established. Opponents of Soviet aims are ousted. The strongest propaganda guns are put in action; there begins a bombardment on behalf of socialist economy. Here 86

the cinema plays a big In this same spirit he described the "enthusiastic workdays" devoted to capturing the transformation of the Russian countryside, which was epitomized by "kolkhozes, where, as in a drop of water, is reflected the boundless horizon of a new social era."'^ His enthusiasm was not dampened even when Stalin's intervention obliged him to spend two more months shooting footage for a new ending in the North Caucasus and the Ukraine, major centers of collectivizing efforts. In a letter to his French friend, Leon Moussinac, he enthused: "And I saw with my own eyes what is meant by the 'building of socialism.' Nothing could be more moving and more heroic! "^^ Eisenstein'.s passion undoubtedly derived not only from his commitment to the cause, but also from his methodological experimentation and his related theoretical writing. Just as Eisenstein's support for collectivization was apparently unqualified, the content of Old and New exhibits orthodox traits of the cultural revolution. Not only does the film deal with a contemporary problem of Soviet life, but it also displays attributes typical of Soviet literature during the First Five-Year Plan. Eisenstein's central character, Marfa Lapkina, a poor peasant woman, is one of Gorky's "little men," who is being raised to his full "human dignity."'^ Her creative potential will be fulfilled through banding together with other little people and contributing to the great achievements of the age. Typically, these efforts would lead to rapid and radical change, a second characteristic of the cultural revolution. Examples of such change in Old and New include: the miracle of the cream separator, which immediately increases membership in the co-op from four to fifty; the instant maturing of the communal bull and the rapid multiplying of his progeny, and the multifarious accomplishments of the tractor, plowing deep and fast, knocking down the fences dividing individual peasant holdings, and reproducing at a rate to equal the bull. But more than just the environment was to be transformed; by crossing "the muzhik with science, a new kind of person is born. Collectivist-man. Collectivizing-man."^^ At the film's end, a series of retrospective close-ups recapitulates Marfa's transformation from oppressed peasant to joyous tractor driver, attired in a stylized headgear with visor. Closely linked to Eisenstein's positive relationship to the cultural revoluti 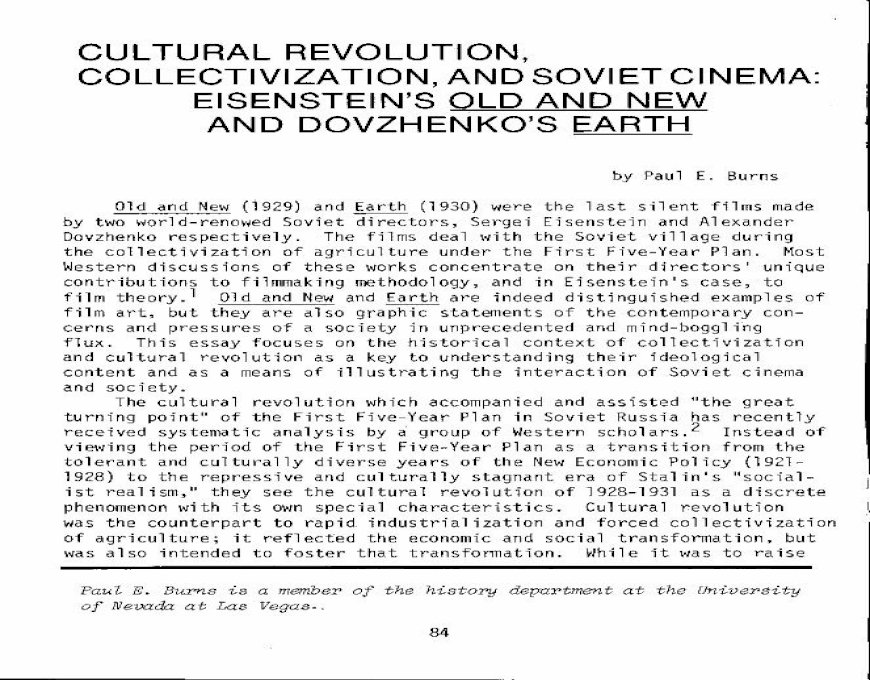 There Will Be Killing: Collectivization and Death of Draft

Best Books on the Folly of Socialism · PDF file 2020-03-25 · The classic account of the Soviet Union’s forced labor camps. The Harvest of Sorrow: Soviet Collectivization and the

Stalin’s Collectivization: From an Idealistic View to a

The Advantages of Being Atomized: How Hungarian Peasants Coped with Collectivization

There Will Be Killing: Collectivization ... - ccs.fudan.edu.cn