Q-1 Which layer of the OSI model is responsible for reliable connections?

Answer: The Transport layer of the OSI model is responsible for reliable connections.

Q-2 What is the difference between acknowledgments and handshaking?

Answer: Handshaking is used to negotiate the properties of a connection that is being established. Acknowledgments are used to tell the sender that data has been successfully received by the destination during the use of a connection.

Q-3 How many VTP modes are there and what are they?

Q-4 What are the two types of Trunk encapsulation protocols?

Q-5 What are the four primary no routable protocols?

Q-6 What is the difference between TCP and UDP?

Answer: HSRP, or the Hot Standby Routing Protocol, is a Cisco proprietary protocol that brings routing functionality to end devices that would otherwise not be capable of taking advantage of redundant network connections. HSRP enables a pair of Cisco routers to work together to present the appearance of a single virtual default-gateway to end devices on a LAN segment.

Q-8 What is the difference between a Public IP address and a Private IP address?

Q-9 What does AAA stand for?

Answer: H.323 is used for multiservice (multimedia) applications, usually in a Voice Over IP environment.

Q-2 what is the range of values for administrative distance?

Q-3 Describe the difference between unicast, multicast, and broadcast traffic?

Q-4 What are the four different Ethernet encapsulation types?

Answer: From the Cisco IPX encapsulation command they are ARPA, NOVELL-ETHER, SAP and SNAPQ-5 What are the three main tasks of a transparent bridge?Answer: Learning, Forwarding, Filtering

Q-6 What type of routing protocol is EIGRP?

Q-7 While troubleshooting a connectivity problem on the network, you issue the ping command from your PC command prompt, but the output shows "request times out." At which OSI layer is this problem associated with?

Q-8 What algorithm does OSPF use to compute its route table?

Answer: A stub area is an area that does not accept routing updates from outside its autonomous system.

Q-10 What does the TTL field of an IP packet header do?

Answer: The TTL field indicates the maximum time that a packet can be on the network. Each router that processes this packet decrements the TTL value by 1. If the value reaches zero, the packet is discarded from the network. The purpose of this field is to eliminate the possibility of a packet endlessly traversing the network.

1What is the primary purpose of a LAN?

A:The primary purpose of a local-area network is to allow resource sharing. The resources may be devices, applications, or information. Examples of shared resources are files, databases, e-mail, modems, and printers.

2:What is a protocol?

A:A protocol is an agreed-upon set of rules. In data communications, the rules usually govern aprocedure or a format.

3:What is the purpose of a MAC protocol?

A:A Media Access Control protocol defines how a given LAN medium is shared, how LAN devicesconnected to the medium are identified, and how frames transmitted onto the medium areformatted.

A:A frame is a digital "envelope" that provides the information necessary for the delivery of data across a data link. Typical components of a frame are identifiers (addresses) of the source and destination devices on the data link, an indicator of the type of data enclosed in the frame, anderror-checking information.

5:What feature is common to all frame types?

A:A feature common to all frame types is a format for identifying devices on the data link.

6:What is a MAC address or MAC identifier?

A:A Media Access Control address or identifier is a means by which individual devices connected to a data link are uniquely identified for the purpose of delivering data.

7:Why is a MAC address not a true address?

A:An address specifies a location. A MAC address is not a true address because it is permanently associated with the interface of a specific device and moves whenever the device moves. A MAC identifies the device, not the location of the device.

9:What is the purpose of a repeater?A:A repeater is a device that extends the useful range of a physical medium by reading a degradedsignal and producing a "clean" copy of the signal.

10:What is the purpose of a bridge?

A:A bridge is a device that increases the capacity of a LAN. A bridge divides the data link intosegments, forwarding only traffic that is generated on one segment and is destined for anothersegment. By controlling and limiting the traffic on a data link, more devices may be attached to the LAN.

A:A transparent bridge "listens promiscuously" on each of its ports. That is, it examines all frames on all media to which it is attached. It records the source MAC identifiers of the frames, and the ports on which it learns the identifiers, in a bridging table. It can then refer to the table when deciding whether to filter or forward a frame. The bridge is transparent because it performs this learning function independently of the devices that originate the frames. The end devices themselves have no knowledge of the bridge.

A:Three fundamental differences between local-area and wide-area networks are:

LANs are limited to a small geographic area, such as a single building or small campus.WANs cover a large geographic area, from citywide to worldwide.LANs usually consist entirely of privately owned components. Some components of aWAN, such as a packet switching network or point-to-point serial links, are usually leasedfrom a service provider.A LAN provides high bandwidth at a relatively cheap price. The bandwidth across a WANis significantly more expensive.

A:The primary similarity between a bridge and a router is that both devices increase the number of hosts that may be interconnected into a common communications network. The difference is that a bridge works by interconnecting separate segments of a single network, whereas a routerinterconnects separate networks.

16:As a packet progresses across an internetwork, does the source address change? 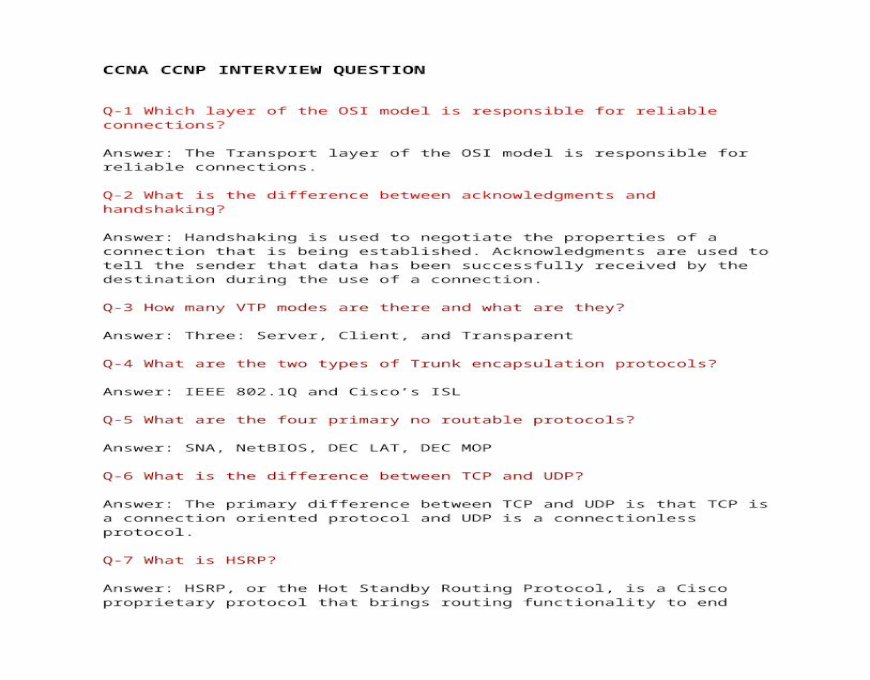