There is hereby granted to Fanch Cablevision of Colorado, L.P. (hereinafter called "Grantee") and to the Grantee's successors, lessees and assigns for the term of fifteen (15) years from the date hereof, extended by ten (10) years, to expire on June 8, 2112, the nonexclusive right, authority, power and franchise to establish, construct, acquire, maintain and operate a community antenna and closed-circuit electronic system within the Town to render, furnish and sell community antenna and closed circuit television and other electronic service from such system to the inhabitants of the Town and to use and occupy the streets and other public places within the corporate limits of the Town as such ways, places and limits now exist, or may hereafter exist, for its community antenna and closed-circuit television and other electronic system including the right to enter and construct, erect, locate, relocate, repair and rebuild in, on, under, along, over and across the streets, alleys, avenues, parkways, lanes, bridges and other places of the Town, all towers, cables, amplifiers, conduits and other facilities owned, leased or otherwise used by the Grantee for the furnishing of the community antenna and closed-circuit television and other electronic service within the Town during the continuance of the franchise hereby granted.

(a)Any pavement, sidewalk or curbing taken up and all excavations made by the Grantee shall be done under permits issued for work by the proper officials of the Town and shall be made and done in such manner as to give the least inconvenience to the inhabitants of the Town and the public generally, and all such pavements, sidewalks, curbing and excavations shall be replaced and repaired in as good condition as before, with all convenient speed, by and at the expense of the Grantee, who shall at all times make and keep full and complete plats, maps and records showing the exact locations of its facilities located within the public ways of the Town; and keep a copy thereof on file in the office of the Town Clerk. The Grantee shall not place poles or other fixtures where the same will interfere with any gas, electric or telephone fixture, water hydrant or main, and all such poles or other fixtures placed in any street shall be placed at the outer edge of the sidewalk and inside the curb line, and those placed close to the line of the lot abutting on said alley, and then in such a manner as not to interfere with the usual travel of said streets, alleys and public ways.

(b)In the event utilities other than Grantee elect to relocate their lines underground to permit the removal of poles and wire stringing above ground, the Grantee shall relocate its cable to a point underground in order that poles supporting such cables be eliminated and removed from streets, alleys, avenues, parkways, lanes, bridges and other places of the Town.

The Grantee agrees to hold and save the Town harmless from any and all liability that may arise out of the construction, maintenance, copyrights infringement, operation or use of the Grantee's system and works and the providing of such services, and to provide and keep in force adequate liability insurance therefor. The Grantee shall, before commencing the construction of its facilities, procure and furnish, at its own expense, and shall file with the Town Clerk certificates evidencing public liability insurance with limits of at least two hundred thousand dollars ($200,000.00) on any one (1) person and five hundred thousand dollars ($500,000.00) for any one (1) accident, and property damage insurance of at least one hundred thousand dollars ($100,000.00), all of said insurance to name the Grantee and the Town as insured parties. The Town shall notify the Grantee's representative in the Town within thirty (30) days after presentation of any demand or claim that may thus arise, whether by suit or otherwise, against the Town.

The Grantee shall have the authority to promulgate such rules, regulations, terms and conditions of its business as shall be reasonable and necessary to enable the Grantee to exercise its rights and perform its service under the franchise and to assure an uninterrupted service to each and all of its customers. The Grantee shall have the right and power to fix, charge, collect and receive reasonable rates for community antenna and closed-circuit television and other electronic service furnished within the corporate limits of the Town, provided that the Board of Trustees reserves the right at all times during the existence of the franchise to fix and determine maximum rates to be charged by the Grantee for services in the Town to the extent permitted by law.

The Town reserves the right of reasonable regulations of the erection, construction or installation of any facilities by the Grantee and to reasonably designate where such facilities are to be placed within the public ways and places; provided, however, that no towers or poles shall be erected by the Grantee without the express written consent of the Town, at locations to be approved by the Town, which consent shall be evidenced by a written permit from the Town Clerk or other authorized representative of the Town, and provided further that the Grantee shall, at its own expense, move its lines, cables, wiring, towers, poles and other apparatus to other locations when required by the Board of Trustees for the safety or convenience of the Town and inhabitants hereof.

At any time during the period of this franchise, the Town shall lawfully elect to improve, alter or change the grade of any street, alley or other public way, or shall determine, for reasons of safety or convenience of the public, that any cable, pole or apparatus of the Grantee should be relocated, the Grantee upon reasonable notice by the Town shall remove, relay and relocate its poles, wires, cables, underground conduits, manholes and other fixtures at its own expense.

The Grantee shall at all times during the life of the franchise be subject to all lawful exercise of the police power by the Town and to such reasonable regulation as the Town shall hereafter by resolution or ordinance provide.

In consideration of the rights, privileges and franchise hereby granted and as compensation to the Town for the use of its public ways and places by the Grantee and in lieu of all occupation and license taxes, the Grantee shall on or before the last day of January and the last day of July of each year in which the franchise is effective, pay to the Town a sum equal to five percent (5%) of the gross receipts from the sale of closed-circuit television or other services provided by the cable television franchisee within the then-existing corporate limits of the Town for the preceding six-month period ending on the last day of December and the last day of June, respectively.

Whenever the Town shall permit the moving of any building or structure upon any of the public ways therein, the Grantee will, upon reasonable notice, properly make temporary removal of its poles, wires or other installations that interfere with such moving. The actual cost of the labor and materials necessarily required for such temporary removal shall be paid by the person obtaining such permit.

(1)To furnish said service to any place in the corporate limits of the Town as the same exist from time to time, upon application and tender of the required connection fee therefor; unless construction costs shall exceed two hundred fifty dollars ($250.00).

(2)That trunk and distribution lines normally will not be extended more than two hundred (200) feet per customer to be connected unless customers are willing to make a contribution in aid of actual cost of construction. Aerial extensions of a main line are expected to cost approximately one dollar ($1.00) per foot and underground extensions (barring difficult soil or terrain) are expected to cost approximately one dollar and fifty cents ($1.50) per foot.

(3)To provide, by means of its cables to its patrons in the Town, a television signal that will produce in a properly operating commercial television set a depen 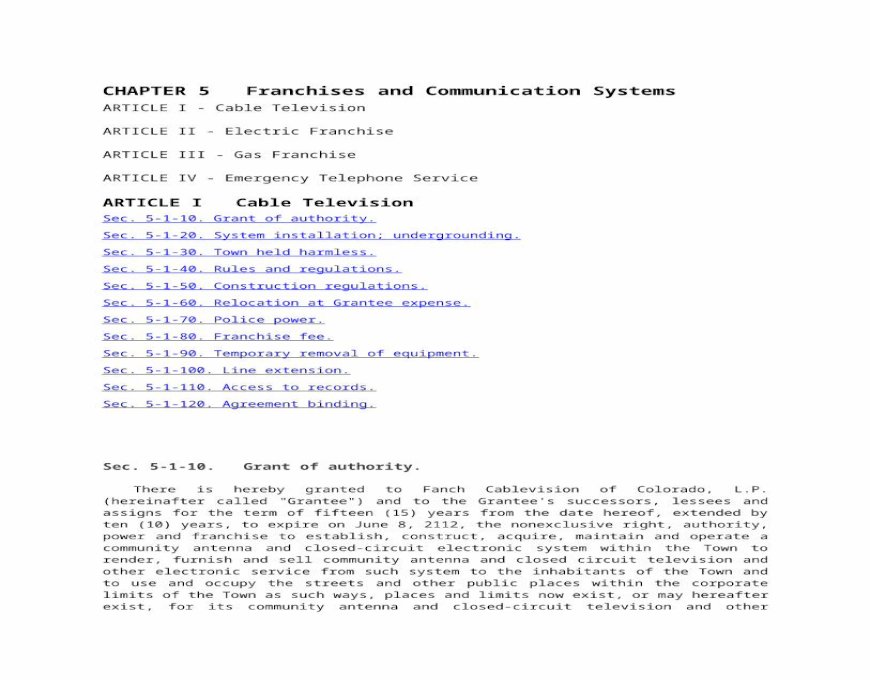 Franchises By The Numbers