DownloadReport this document
Share this document with a friend
Description:
BOOK 4 by Aleister Crowley PART I MEDITATION THE WAY OF ATTAINMENT OF GENIUS OR GODHEAD CONSIDERED AS A DEVELOPMENT OF THE HUMAN BRAIN
Transcript:

THE WAY OF ATTAINMENT OF GENIUS OR GODHEAD CONSIDERED

AS A DEVELOPMENT OF THE HUMAN BRAIN

Issued by order of

EXISTENCE, as we know it, is full of sorrow. To mention only one minor point: every man is a condemned criminal, only he does not know the date of his execution. This is unpleasant for every man. Consequently every man does everything possible to postpone the date, and would sacrifice anything that he has if he could reverse the sentence.

Practically all religions and all philosophies have started thus crudely, by promising their adherents some such reward as immortality.

No religion has failed hitherto by not promising enough; the present breaking up of all religions is due to the fact that people have asked to see the securities. Men have even renounced the important material advantages which a well-organized religion may confer upon a State, rather than acquiesce in fraud or falsehood, or even in any system which, if not proved guilty, is at least unable to demonstrate its innocence.

Being more or less bankrupt, the best thing that we can do is to attack the problem afresh without preconceived ideas. Let us begin by doubting every statement. Let us find a way of subjecting every statement to the test of experiment. Is there any truth at all in the claims of various religions? Let us examine the question.

Our original difficulty will be due to the enormous wealth of our material. To enter into a critical examination of all systems would be an unending task; the cloud of witnesses is too great. Now each religion is equally positive; and each demands faith. This we refuse in the absence of positive proof. But we may usefully inquire whether there is not any one thing upon which all religions have agreed: for, if so, it seems possible that it may be worthy of really thorough consideration.

It is certainly not to be found in dogma. Even so simple an idea as that of a supreme and eternal being is denied by a third of the human race. Legends of miracle are perhaps universal, but these, in the absence of demonstrative proof, are repugnant to common sense.

But what of the origin of religions? How is it that unproved assertion has so frequently compelled the assent of all classes of mankind? Is not this a miracle?

There is, however, one form of miracle which certainly happens, the influence of the genius. There is no known analogy in Nature. One cannot even think of a "super-dog" transforming the {7} world of dogs, whereas in the history of mankind this happens with regularity and frequency. Now here are three "super-men," all at loggerheads. What is there in common between Christ, Buddha, and Mohammed? Is there any one point upon which all three are in accord?

No point of doctrine, no point of ethics, no theory of a "hereafter" do they share, and yet in the history of their lives we find one identity amid many diversities.

Buddha was born a Prince, and died a beggar.

Mohammed was born a beggar, and died a Prince.

Christ remained obscure until many years after his death.

Elaborate lives of each have been written by devotees, and there is one thing common to all three -- an omission. We hear nothing of Christ between the ages of twelve and thirty. Mohammed disappeared into a cave. Buddha left his palace, and went for a long while into the desert.

Each of them, perfectly silent up to the time of the disappearance, came back and immediately began to preach a new law.

This is so curious that it leaves us to inquire whether the histories of other great teachers contradict or confirm.

Moses led a quiet life until his slaying of the Egyptian. He then flees into the land of Midian, and we hear nothing of what he did there, yet immediately on his return he turns the whole place upside down. Later on, too, he absents himself on Mount Sinai for a few days, and comes back with the Tables of the Law in his hand.

St. Paul (again), after his adventure on the road to Damascus, goes into the desert of Arabia for many years, and on his return overturns the Roman Empire. Even in the legends of savages we find the same thing universal; somebody who is nobody in particular goes away for a longer or shorter period, and comes back as the "great medicine man"; but nobody ever knows exactly what happened to him.

Making every possible deduction for fable and myth, we get this one coincidence. A nobody goes away, and comes back a somebody. This is not to be explained in any of the ordinary ways.

There is not the smallest ground for the contention that these were from the start exceptional men. Mohammed would hardly have driven a camel until he was thirty-five years old if he had possessed any talent or ambition. St. Paul had much original talent; but he is the least of the five. Nor do they seem to have possessed any of the usual materials of power, such as rank, fortune, or influence.

Moses was rather a big man in Egypt when he left; he came back as a mere stranger. {8}

Christ had not been to China and married the Emperor's daughter.

Mohammed had not been acquiring wealth and drilling soldiers.

Buddha had not been consolidating any religious organizations.

St. Paul had not been intriguing with an ambitious general.

What was the nature of their power? What happened to them in their absence?

History will not help us to solve the problem, for history is silent.

We have only the accounts given by the men themselves.

It would be very remarkable should we find that these accounts agree.

Of the great teachers we have mentioned Christ is silent; the other four tell us something; some more, some less.

Buddha goes into details too elaborate to enter upon in this place; but the gist of it is that in one way or another he got hold of the secret force of the World and mastered it.

Of St. Paul's experiences, we have nothing but a casual illusion to his having been "caught up into Heaven, and seen and heard things of which it was not lawful to speak."

Mohammed speaks crudely of his having been "visited by the Angel Gabriel," who communicated things from "God."

Moses says that he "beheld God."

Diverse as these statements are at first sight, all agree in announcing an experience of the class which fifty years ago would have been called supernatural, to-day may be called spiritual, and fifty years hence will have a proper name based on an understanding of the phenomenon which occurred.

Theorists have not been at a loss to explain; but they differ.

The Mohammedan insists that God is, and did really send Gabriel with messages for Mohammed: but all others contradict him. And from the nature of the case proof is impossible.

The lack of proof has been so severely felt by Christianity (and in a much less degree by Islam) that fresh miracles have been manufactured almost daily to support the tottering structure. Modern thought, rejecting these miracles, has adopted theories involving epilepsy and madness. As if organization could spring from disorganization! Even if epilepsy were the cause of these great movements which have caused civilization after civilization to arise from barbarism, it would merely form an argument for cultivating epilepsy.

Of course great men will never conform with the standards of little men, and he whose mission it is to overturn the world can hardly escape the title of revolutionary. The fads of a period always furnish terms of abuse. The fad of Caiaphas was Judaism, and the Pharisees told him that Christ "blasphemed." Pilate was a loyal Roman; to him {9} they accused Christ of "sedition." When the Pope had all power it was necessary to prove an enemy a "heretic." Advancing to-day towards a medical oligarchy, we try to prove that our opponents are "insane," and (in a Puritan country) to attack their "morals." We should then avoid all rhetoric, and try to investigate with perfect freedom from bias the phenomena which occurred to these great leaders of mankind.

There is no difficulty in our assuming that these men themselves did not understand clearly what happened to them. The only one who explains his system thoroughly is Buddha, and Buddha is the only one that is not dogmatic. We may also suppose that the others thought it inadvisable to explain too clearly to their followers; St. Paul evidently took this line.

Our best document will therefore be the system of Buddha; but it is so complex that no immediate summary will serve; and in the case of the others, if we have not the accounts of the Masters, we have those of their immediate followers.

The methods advised by all these people have a startling resemblance to one another. They recommend "virtue" (of various kinds), solitude, absence of excitement, moderation in diet, and finally a practice which some call prayer and some call meditation. (The former four may turn out on examination to be merely conditions favourable to the last.)

On investigating what is meant by these two th 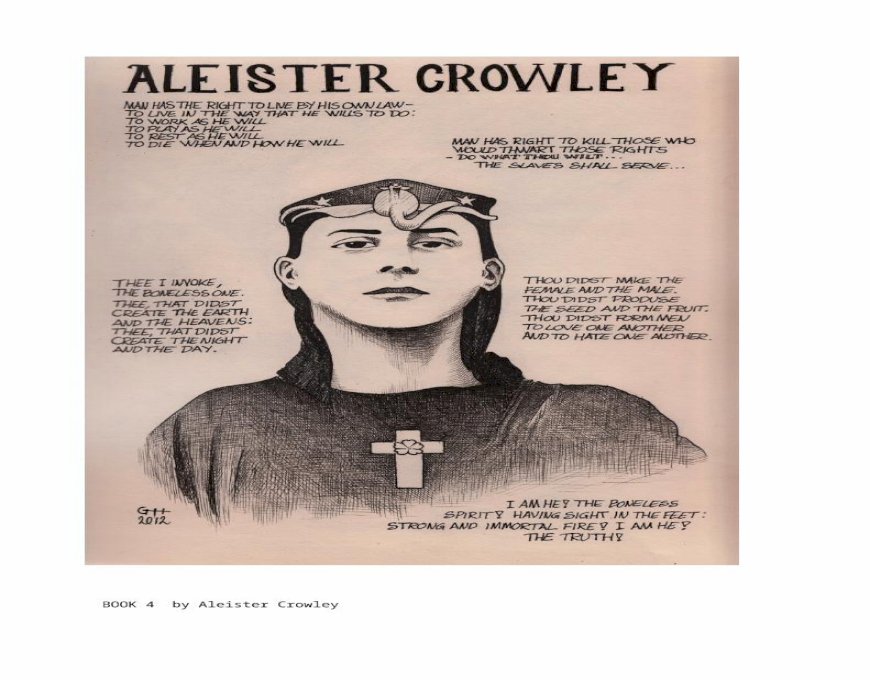