Daddys GunAuthors noteDaddys Gun is a story that is based on a real event http://www.theguardian.com/us-news/2015/jan/22/florida-toddler-fatally-shoots-himself-father-gun. Daddys Gun demonstrates the importance of gun control. I believe gun control can increase peoples safety and reduce crime and accidents. I chose this story not to criticize Calebs parents, but to highlight how dangerous guns are.

Aaron and his toddler Caleb are driving home. Aaron stops by a gunshop and buys a 380 caliber handgun. While paying for the gun, Aaron noticed a poster warning gun owners that, Guns can kill your family. Aaron however, is concerned about Caleb being alone and rushes to the car. The shopkeeper quickly hands a copy of the Florida gun laws to Aaron and tells him to read it.

They finally arrive home. Aaron quickly runs out to take the stuff inside. Meanwhile, Caleb accidentally opens the glove box and grabs the gun. The gun laws fly out the glove box and land on the car mat. Caleb points the gun at himself.

Aaron is bringing the shopping into the house, when suddenly, he hears what sounds like thunder. He drops everything and dashes to the car. He gets the shock of his life when he sees blood splattered on the window.

Aaron opens the door to find Caleb dead. He has bled to death. The gun is in his hand. The neighbors run to the car. Calebs mother screams as she sees the blood splattered on the window. She collapses onto the ground and cries. Aaron is frozon like a statue. He is speechless. The sound of sirens is getting louder and louder every second.

After 3 hours, the investigation is over. The investigator said that Caleb didnt have enough strength to pull the trigger. He could only pull half the way, but the gun still fired. The investigators give Aaron the bag of all the things in the car. He takes out the gun and the gun laws. He remembers the poster at the gunshop, Guns can kill your family. He drops to his knees in devastation and cries hysterically.

Calebs mother and the investigators are talking. At that moment, the sound of thunder fills the air. They look around and see something that they cannot believe 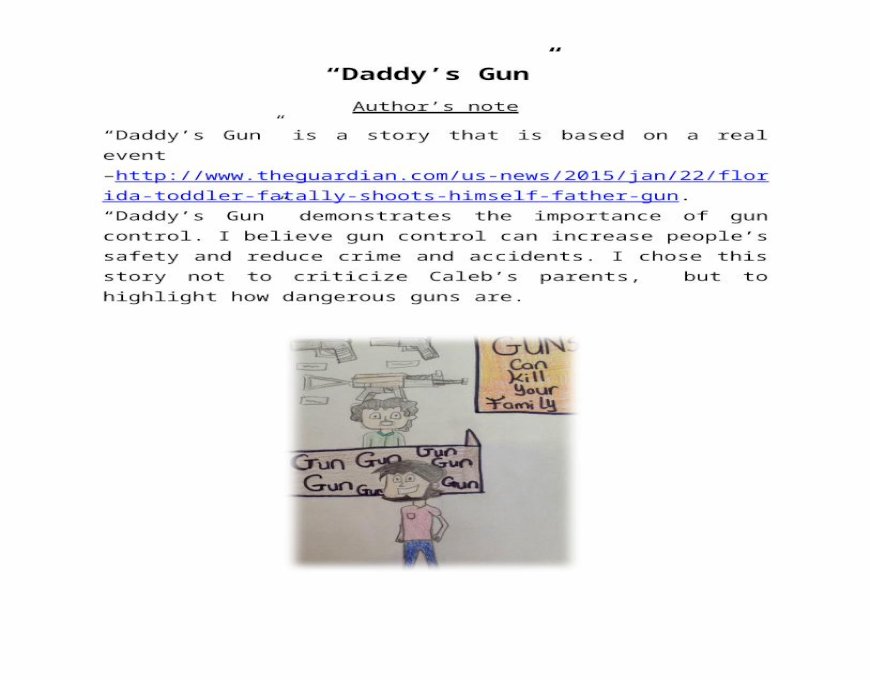 Here are mummy and daddy. Mummy is prettier than daddy