Some of the common problems that lead to the failure of communication are noise, cultural differences, and complexity of subject matter, personal biases, semantic problems, socio-psychological barriers, filtering, information overload, poor retention, poor listening, goal conflicts, slanting and inferring. Barriers to communication can be classified as follows on the basis of the stage of the communication process during which the problem/s arise:

Sender-oriented barriers, which include lack of planning, lack of clarity about the purpose of communication, improper choice of words resulting in a badly encoded message, difference in perception, wrong choice of the Channel, unjustified presumptions, etc. Example: - you have been working in the fast Food joint for the last five years. You are pretty comfortable with the working of the organization. All your friends have moved to other organization and you are oldest in the organization. The young batch of recruits has a lot of problems with the functioning of the joint and the group and the oldest member of organization to represent the cause of the old and fresh recruits. This invitation has come to you suddenly and you are not prepared for it. The manager asks you to sit and talk about the problems experienced by the younger group and asks you whether similar problems were faced by the senior members who have already left.

In this particular example, you are caught Off-guard. As an insider of the group you are not sure of how much information can actually be divested. In the process of trying to figure out how much information must be revealed you are unable to bring clarity in your message. a. Receiver-oriented barriers, like poor listening, lack of interest, difference in perception and biased attitude.

Example: - you have recently joined an organization and your team leader calls all the team players and informs that the organization is going through a very bad patch. Financial resources are restricted and any innovations in terms of projects have to be curtailed as it will indicate an increase in costs.

Two days later, the same team leader calls all of you and tells you that a new project has been assigned to the group. It may need experimentation before it is finalized and work can actually begin. The meeting closes with the following statement: Do not worry about the costs. We are working in a rich company which always gives preference to quality over costs. Presentation of conflicting information creates doubts in your mind: Have I joined a rich company which gives preference to quality or have I joined an ordinary company in which costs determine the quality? the mind oscillates between conflicting information provided by the same sender. Result-poor receptivity of the message.

b. Channel oriented barriers, such as noise, wrong selection of medium, technical defects in the address system or the medium of communication chosen by the sender and time and distance. We may define communication as a psycho-semantic process. Therefore, the barriers that affect the effectiveness of communication are mostly of a social-psychological-linguistic nature. These factors may act upon any or all of the elements in the process of communication,

Which often leads to the breakdown of communication in a specific situation? A common frame of reference is the context in which communication takes place. A well-defined context helps the sender and the receiver to comprehend the content of the message in a similar way, with regard to its implications and meaning. Many of the barriers listed above are easy to understand. But a few of them may require a detailed explanation. Types of Barriers Barriers to communication can be classified into the following broad categories: Physical or environmental barriers. Physiological or biological barriers Semantic or language barriers

Personal barriers Emotional or perceptional barriers Socio-psychological barriers. Cultural barriers Organizational barriers Physical or environmental barriers Physical barriers are those barriers which are caused due to some technical defects in the media used for communication and/or due to certain disturbances in the surrounding environment. Often, the term noise is used as a blanket term to refer to physical barriers in general. But noise, in its literal sense, is also one of the factors that give rise to physical barriers during the process of communication. Besides noise, wrong selection of medium, lack of acoustics, poor lighting, frequent movements of hands, fiddling with a pen, or even serving of tea during an important conversation are also responsible for creating physical barriers in the communication process. Noise Noise is the first major barrier to communication. Communication is distorted by noise that occurs at the transmission level. The meaning attributed to the word noise in the field of communications is derived from its definition in physics. In physics, noise refers to a disturbance, especially a random and persistent disturbance, which obscures or reduces the clarity of a signal. One of the modern-day connotations of the word noise apparent in its use in the field of computer science is irrelevant or meaningless data. For example, the noise of traffic around a school obstructs the smooth flow of information between the teacher and the students. It makes6

oral communication difficult. Similarly, poor signal or static while talking over the cell phone or using the public address system or watching TV also distorts the sound signals and disrupts communication. Bad weather conditions may also sometimes interfere with the transmission of signals and may lead to breakdown of communication channels. As discussed above, noise is not only the disruption of sound signals, but it also includes all the barriers that may arise at any of the various stages of communication. In a broad sense, it denotes semantic barriers, perceptional barriers as well as psychological barriers. Time and distance Time and distance may also obstruct the smooth flow of information. Today, because of technological advancements, we have means of communication available, and this in turn has made the world a smaller place. But at times, these means of communication may not be easily accessible because of unavailability or due to technical/technological problems. This may lead not only to a physical but also a communication gap between the transmitter and the receiver. Time differences between two different countries may affect communication between the people living in them. Even the people working in different shifts in the same organization may face problems in communicating effectively. Improper seating arrangement in a classroom or in a conference hall may also act as a barrier to effective communication as it is difficult to maintain eye contact with ones audience. Thus, communication can be successful only when the communicators manage to overcome the barriers by minimizing the obstacles that crop up due to spatial and temporal factors.7

C. Wrong choice of medium This cans also a barrier to effective communication. For example, if an expert uses charts or graphs or Power Point presentations to orient uneducated factory workers or volunteers to a new method or working, they are bound to be ill-equipped to get any information or directions from such sophisticated presentations. Surroundings Adverse weather conditions affect not only the means of communication, but

Also have an impact on the sender and the receiver of the message. When two people have to communicate with each other in extreme weather conditions, whether too hot or too cold, their surroundings do8

have a direct effect on the effectiveness of the exchange that place between them. Thus, environmental factors determine peoples mood and also influence their mental agility and thereby their capacity to communicate effectively. Extreme heat and humidity make people either hyper or listless and thus cause immense stress, which I turn, affects clear thinking and the attitude of the communicator, whereas extreme cold weather induces laziness and also impedes the ability to think clearly and respond sharply, thereby causing communication failure.

Physiological barriers are related to a persons health and fitness. These may arise due to disabilities that may affect the physical capability of the sender or the receiver, for example poor eyesight, deafness and uncontrolled body movements. Physical defects in ones body may also disrupt communication. While communicating, a person uses his/her: Vocal (speech) organs to produce sound/speech. Hand and fingers to write Ears to take i 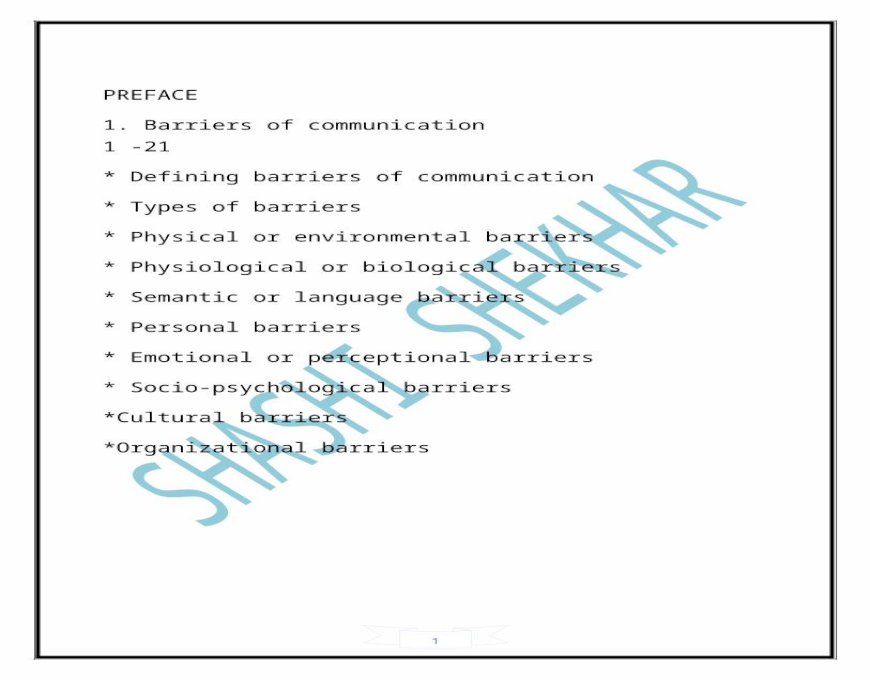