Dementia is a clinical syndrome of cognitive deficits that involves both memory impairments and a disturbance in at least one other area of cognition (e.g., aphasia, apraxia, agnosia) and disturbance in executive functioning.

In addition to disruptions in

cognition, dementias are commonly associated with changes in function and behavior. The most common forms of progressive dementia are Alzheimer's disease, vascular dementia, and dementia with Lewy bodies; the pathophysiology for each is poorly understood.

PREVALENCE Dementia affects about 5% of individuals 65 and older. Four to five million Americans have Alzheimer's disease (AD) 13.2 million are projected to have AD by 2050. Global prevalence of dementia is about 24.3 million, with 6 million new cases every year.

1.Alzheimer s diseaseAlzheimer s disease is the most common type of dementia. In patients aged 65 years or older, who have some kind of cognitive decline, it accounts for over 50% of cases. Progression to full dementia may take several years following the signs of mild cognitive impairment (MCI) at the early stage of AD.

2.Vascular dementiaVascular dementia is the second most common cause of dementia. It results from vascular or circulatory lesions or from diseases of the cerebral vasculature leading to ischaemia or infarction.

4.Fronto-temporal dementiaFronto-temporal dementia (FTD) sometimes called Pick s complex is characterized by focal frontal atrophy with personality and behavioural disturbances, or temporal atrophy with either progressive aphasia or semantic dementia [Hodges, 1992; Neary, 1998]. Onset of FTD is observed in a younger age group than other dementias and diagnosis may be difficult in the early stages of disease.

Symptoms at the early stage include the following: Forget recent events and distant

Affect the activity of daily living Judgment will be reduced Personality will be changed Become passive and lose initiative.

Symptoms at the middle stage include the following: Lose cognitive ability, such as the ability to learn, judge, and reason Become emotionally unstable, and easily lose temper or become agitated Need help from his or her family with activities of daily living Confuse night and day, and disturb the family's normal sleeping time.

Symptoms at the later stage include the following: Lose all cognitive ability Become entirely incapable of selfcare, including eating, bathing, and so on Neglect personal hygiene, and will become incontinent Lose weight gradually, walk unsteadily and become confined to bed.

If you think you may be developing

dementia, visit your GP. It's very important to seek help early so you can get the support you need. Your GP will ask about your symptoms and examine you. He or she may also ask you about your medical history. Your GP may do blood and urine tests to rule out the possibility of other conditions that could cause symptoms similar to dementia.

You may also have a memory test - one that is

often used to help find out if you have dementia is the 'mini mental state examination (MMSE)'. In this test, your GP will ask you some questions and test your attention and ability to remember words. How you score in this test indicates how serious your condition is, for example:-an MMSE score of 20 to 24 indicates mild dementia -a score of 10 to 20 suggests moderate dementia -a score below 10 implies severe dementia

Talking therapiesYou may find other therapies helpful, such as: group activities and discussions - these aim to stimulate your mind (this is sometimes referred to as cognitive stimulation therapy) reminiscence therapy - discussing past events in groups, usually using photos or familiar objects to jog your memory, although there are conflicting opinions on whether this is effective

Complementary therapies It's possible that aromatherapy

will help you to feel less agitated. However, there is only a small amount of evidence to support this.

common cause of dementia 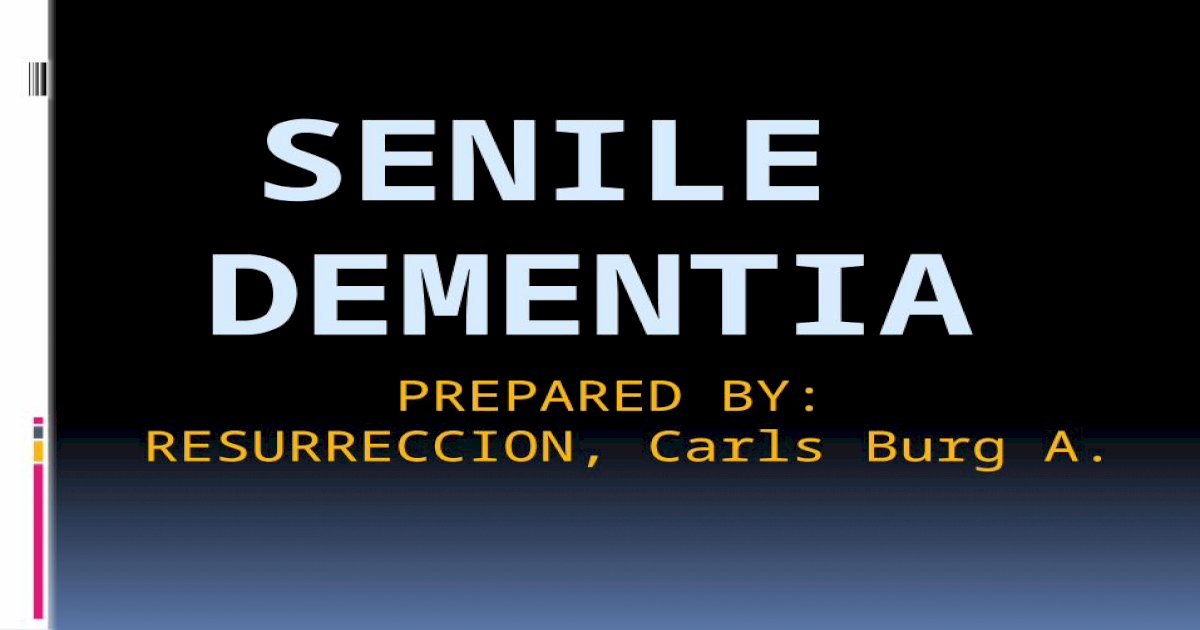 NATIONAL DEMENTIA VISION AND STRATEGY FOR GIBRALTAR · PDF file dementia, including Lewy Body Dementia, Vascular Dementia and Front Temporal Dementia, which are among the most common.