2. Typhoon Haiyan, known as Typhoon Yolanda in the Philippines, was an exceptionally powerful tropical cyclone that devastated portions of Southeast Asia, particularly the Philippines, in November 8, 2013. It was three months ago, areas of the Philippines were destroyed by typhoon Haiyan, one of the strongest storms ever recorded. The storm slammed into Tacloban, a city of 220,000 in the central Philippines. Evacuation has finally begun, but many residents remain in the region without food, clean water or shelterall were destroyed by the typhoon.STEPHANIE Y. CASTILLO 3. AREAS SEVERELY AFFECTED BY 'YOLANDA' Eastern SamarMatarinao Bay BiliranPoro Island, Biliran Strait LeyteTacloban, San Juanico Strait QuezonPort Pusgo PalawanPort Barton IloiloBanate LeytePalompon LeyteOrmoc Northern SamarHelm Harbor, Gamay Bay CebuTuburanSTEPHANIE Y. CASTILLO 4. Thousands were killedDamage to infrastructureDamage to agricultureSTEPHANIE Y. CASTILLO Around 12,000 people are believed dead in the aftermath of the typhoon, which leveled whole towns. Damage to infrastructure was estimated at P18,336,576,627.39 which includes roads, bridges, and other structures with P14,523,925,177.39 and health facilities with P1.272,434,800. Damage to agriculture was estimated at P18,354,305,869.88, including P7,634,314,370.29 in crops, P5,964,666,346.39 in fisheries, and P2,890,222,123.22 in livestock. 5. STEPHANIE Y. CASTILLO 6. Yolanda has brought unimaginable devastation and loss of lives to our country. This video is Actual Storm Surge Footage. 7. THESE PHOTOS WILL HELP YOU GRASP THE DEVASTATION OF TYPHOON HAIYANSTEPHANIE Y. CASTILLO 8. Police carry body bags out of the ruins left behind in Haiyan's wakeSome bodies were laid in St. Michael The Archangel Chapel in the city of Tacloban, in the central Philippines. The city has no functioning morgue, so people put bodies where they can.STEPHANIE Y. CASTILLO 9. Debris coats the city's streets as the rain continues four days after the typhoon.STEPHANIE Y. CASTILLOSurvivors walk through what now remains of Tacloban.Children pack a motorcycle sidecar to travel through streets that were trashed during the storm. 10. City residents stand in line for supplies and emergency treatment on Monday, three days after the storm. Survivors walk over a bridge destroyed by the typhoon.STEPHANIE Y. CASTILLO 11. The trail of devastation caused by Yolanda is enormous.Yes! They need our help!I am calling everyone especially my fellow Filipinos to extend help to Yolanda victims. We are just lucky not to be one of them. Lets unite and help our brothers and sisters who are in great need. We dont need to be rich to be able to help others. All we need is a giving heart. I have high hopes that our beloved country can make it through this tough crisis. Now its our chance to show what it really is to be Filipino. Lets help one another and be men and women for others.STEPHANIE Y. CASTILLO 12. What are their needs? FoodWater ShelterYolanda Victims need our help.Prayer 13. STEPHANIE Y. CASTILLO 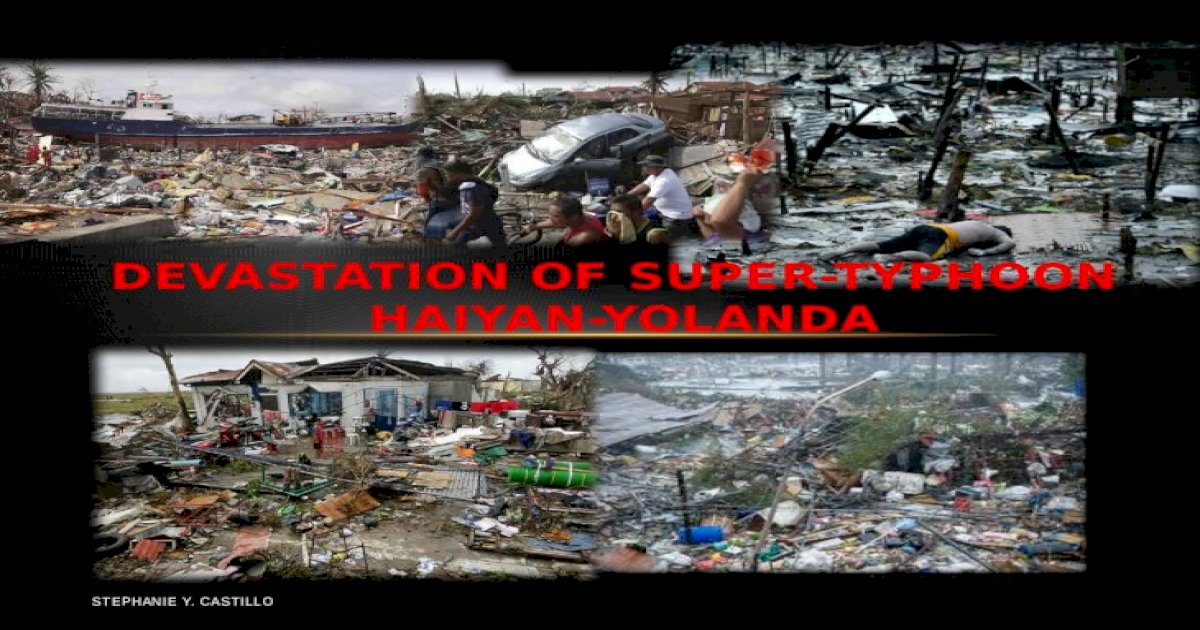 The Philippines and Super Typhoon Yolanda

Typhoon Haiyan Amidst the devastation, images of courage