Journal on Ethnopolitics and Minority Issues in Europe

This article is located at: http://www.ecmi.de/fileadmin/downloads/publications/JEMIE/2013/Georgiou.pdf

Diaspora in the Digital Era: Minorities and Media Representation

on diasporic groups, the article looks at the multi-spatial character of communication

and mobilization and its consequences for expression and communication of cultural

and political belonging. Diasporic groups represent some of the most significant

minorities across European nation-states. While living in and in many cases being

across boundaries, largely through the media. This article argues that diasporic

cultural and political belonging. Only if we examine the diverse and complex ways in

which minorities use the media to make sense of the world around them, can we begin

to understand the wider significance of media and communications for minorities

cultural and political representation and belonging.

especially in social media, national and ethnic minorities can find spaces of

expression away from the constraints of mass media. In a variation of this argument,

to the nations cohesion. Minorities either turn away or against the nation through

their own distinct uses of digital platforms, this argument goes. The hopes and fears

the utopian and dystopian analyses of the Information Society (Mansell, 2010):

technologies can overwhelmingly change cultural and political life with consequences

for identity and citizenship. Yet, how much validity or relevance to actual

Georgiou, Diaspora in the Digital Era

communication do these arguments have? They are no doubt powerful, especially as

they can drive policy and political debates. However, are they useful in understanding

Indeed, if we are interested in minorities recognition and representation,

for research and policy: most of what we know about each other and the world close

by and at a distance is mediated. Media and communications are spaces where

identities are mobilized and to a significant extent shaped, they are tools for learning

within and across boundaries. The consequent argument is that we need to move away

from both the utopian and dystopian overtones of technological determinism. Instead,

I argue, we need to ask three questions: How are media actually changing? What do

minorities do with the media? And, what role do media play in advancing minorities

representation and expression within and across the culturally diverse European

This article explores these three questions in aiming to contribute to

inclusiveness in Europe. Fairer and inclusive representation of minorities in the media

citizenship (Stevenson, 2002). I focus on diasporic groups as these represent some of

the most significant numerically, culturally and politically minorities in European

nation-states and across the European continent. Diasporic populations are not

contained within nation-states even though they live within them. Most often they

developing my argument I draw primarily from empirical research with diasporic

as my own research. This research was grounded in European cities and was

national contexts. The argument I propose is three-fold. First, we need to understand

whether and what kind of opportunities for expression and representation digital

media present to minorities and how those fit within the broader media environment.

In addition, and in order to evaluate these opportunities, we need to study diasporic

engagement with different media in everyday life, i.e. the context in which media are

actually used. Finally, and in order to advance research and policy agendas for

minority expression and representation in the digital media, we need to develop

analytical perspectives that surpass fascination with new media. Instead, I argue, we

freedom of speech and minorities representation in the media.

The discussion is organized into three main sections, each corresponding to

one of the three elements of the main arguments introduced above. I conclude by

briefly outlining the policy implications of this discussion. In this analysis, I adopt a

broad definition of the media that includes old and new media, interpersonal, social

and mass media. There are a number of reasons behind this choice. Most importantly,

communication and different technologies are constantly used next to each other.

different media even more problematic. Thus, in looking at questions of

representation and expression, I find a more holistic approach to media cultures and

1. The context of changing boundaries and changing media

diverse with different kinds of media platforms, and that very different content is

available to share and consume on these platforms. Long gone is the time of the

hegemony of the national press that supported national imagined communities

(Anderson, 1983) or of national broadcasting that contained and reaffirmed national

ideological frames (Scannell, 1996). The time of the dominance of what are now

considered old media especially press and television is well past for most, if not

all, European societies. Yet, and importantly, the dominance of press and television

has not been replaced by an altogether new media system, as internet enthusiasts often

Georgiou, Diaspora in the Digital Era

claim. As Murdock (1993) argues, the media are characterized by complex formations

that operate at different levels instead of a singular overarching structure. Others, like

Mattelart (2002), note that new media, not unlike old media, have not challenged

socio-economic inequalities but have often reproduced them. Empirical evidence

the most popular medium across generations in the United Kingdom (Ofcom, 2010)

audiences. While changes take place across the media industries, sometimes those

complement the power of the dominant players in the media market (Garnham, 2011;

Fuchs, 2011). At the same time, while new media might open up new spaces for 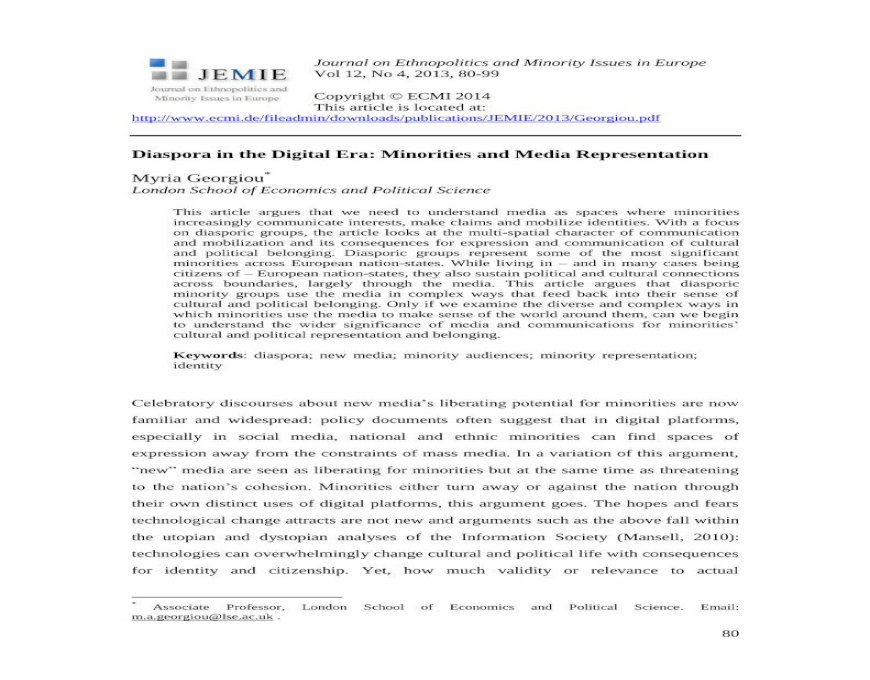