Where: Px is the power output at point X. Py is the power output at point Y. Point X is assumed to be closer to the optical source than point Y. The most widely used method for measuring the total fiber attenuation per unit length is the cut-back or differential method. The experimental setup for measurement of the spectral loss to obtain the overall attenuation spectrum for the fiber is shown in figure.

Measurement Procedure:Setup consists of a white light source i.e. xenon arc lamp, tungsten halogen. This enables the lock in amplifier at the receiver to perform phase sensitive detection. The chopped light is then fed through a monochromator which utilizes a prism or diffraction grating arrangement to select the required wavelength at which the attenuation is to be measured.

Hence, the light is filtered before being focused on to the fiber by means of a microscope objective lens. A beam splitter is used to provide light for viewing optics and a reference signal. A mode stripper is included at the fiber output end to remove any optical power which is scattered from the core into the cladding down the fiber length. The cut-back method involves taking a set of optical power measurements over the required spectrum using a long length of fiber.

The following relationship for the optical attenuation per unit length db for the fiber may be obtained as:

Unit = db/km P 02 ,P 01 are the output optical powers. The electrical voltages V1 and V2 may be directly substituted for the optical powers in above equation.

Drawbacks:The drawback of cut-back method is that it is a destructive technique. Several other non destructive used to measure total optical power is substitution technique, back scatter measurement.

Fiber Absorption Loss MeasurementIt was indicated in the preceding section that there is a requirement for the optical fiber manufacturer to be able to separate the total fiber attenuation into the contributions from the major loss mechanisms. Material absorption loss measurements allow the level of impurity content within the fiber material to checked in the manufacturing process.

The apparatus shown in the figure (a)which is used to measure the absorption loss in optical fibers was modified from an earlier version. This temperature measurement technique is shown in figure(b) has been widely adopted for absorption measurements. The 2 fiber samples shown in fig(b) are mounted in capillary tubes surrounded by low refractive index liquid for good electrical contact.

Fig (a): Schematic Diagram of a version of apparatus

A thermocouple is wound around the fiber containing capillary tubes by using one of them as reference junction. Electrical calibration can be achieved by replacing the optical fibers with thin resistance wires and by passing known electrical power through one. The calorimetric measurements provide heating and cooling curve for the fiber sample used. Attenuation of fiber due to absorption loss is determined from these curves shown in figure.

Fig 1: A typical heating and cooling curve for a sample

A time constant tC can be obtained from the plot of (T -TC) on a logarithmic scale against time as shown in figure:

The time constant tC may be obtained from the slope of the straight line plotted in the previous figure by the formula:

Where t1 and t2 indicates two points in time and tC is a constant for the calorimeter which is inversely proportional to the rate of heat loss from the device. Fiber Attenuation Loss due to absorption is given by:

Fiber Scattering Loss MeasurementMethod of measuring the contribution of the losses due to scattering within the total fiber attenuation is to collect the light scattered from a short length of fiber and compare it with the total optical power in a scattering cell This scattering cell is shown in following figure.

Description:A laser source is utilized to provide a sufficient optical power at a single wavelength together with a suitable instrument to measure the response from a detector. These devices remove the light propagating in the cladding so that the measurements are taken are taken only the light guided by fiber core. Also to avoid the reflections contributing to the optical signal with the cell the output power end is index matched using either a fluid or a suitable surface.

The loss due to scattering sc is given by:-

Since the measurements of length is generally in centimeters and optical power is normally reflected in volts, km is changed into cms and Popt and Psc are replaced by VSC and VOPT.

INTRODUCTIONDispersion measurement gives an indication of the distortion of optical signals as they propagate down optical fibers and delay distortion leads to broadening of transmitted light pulses, limits the information capacity of fiber. Dispersion effects may be characterized by taking measurements of the impulse response of the fiber in the time domain or by measuring the baseband frequency response in frequency domain.

Time Domain MeasurementShort optical pulses are launched into the fiber from a suitable source. The pulses travel down the length og fiber under test and are broadened due to various dispersion mechanisms. The pulses are received by a high speed photo detector and displayed on a fast sampling oscilloscope.

Formulae used for measurement are:

Where: o(3dB) and i(3dB) is pulse width at fiber input and fiber output respectively. L is fiber length.

Frequency Domain MeasurementFrequency Domain measurement is the preferred method for acquiring the bandwidth of multimode optical fibers. For measurement, sampling oscilloscope is replaced by spectrum analyzer which takes the Fourier transform of the pulse in time domain and hence displays its constituent frequency components.

Interferometric methodThis method involves use of interference microscopes. Technique usually involves the preparation of thin slice of fiber(slab) which has both ends accurately polished. The slab is often immersed in an index matching fluid and the assembly is examined with an interference microscope. Two methods are used:a) b)

In both the methods, light from a microscope travels normal to the prepared fiber slice faces and difference in refractive index results in different optical bandwidth.

As shown in above figure, when faces of incident light is compared with phase of emerging light, a field of parallel inference fringes is observed.

Where n1(r) and n1(0) are refractive index at distance r from core and at core resp. n2 is cladding refractive index C(r,z) is correction factor, is a compensation for any leaky mode present in short test fiber.

Refracted Near Field On MethodThis method is complimentary to transmitted near field techniques, but has the advantage that it does not require leaky mode correction factor or equal mode execution. It provides refractive index difference directly without any external calibration.

Experimental ConfigurationA short length fiber is immersed in a cell containing a fluid of slightly higher refractive index. A small spot of light emitted from a 633 nm helium neon laser for best resolution is scanned across the cross sectional diameter of the fiber. Light escaping from the fiber core partly result from the power leakage from the leaky modes which is an undesirable quantity and is blocked using an opaque circular screen.

Any light leaving the fiber core below a minimum angle is prevented from reaching the detector by opaque screen. Figure below shows experimental arrangement.

This measurement can be performed by:a)

Measurement using a rotating stage and a scanning photo detectorA 2m length of the graded fiber has its faces prepared in order to ensure square smooth terminations. The fiber output end is then positioned on the rotating stage parallel to the plane of photo detector input. Light at a wavelength of 0.85 um is launched into the fiber at all possible angles using an optical system. The photo detector is placed 10 to 20 cm from the fiber and positioned in order to obtain a maximum angle with no rotation.

When rotating stage is turned, limits of far-field pattern may be recorded. The output power is monitored and maximum acceptance angle is obtained when power drops to 5% of maximum intensity.

Thus numerical aperture of fiber can be obtained from following equation:

Trigonometric Method:A less precise measurement of numerical aperture can be obtained from the far field pattern by trigonometric means as shown in figure:

Procedure:The end prepared fiber is located on an optical base plate or slab. Again the light is launched into the fiber under test over the full range of its numerical aperture. Far field pattern from the fiber is displayed on a screen which is displayed on a screen which is positioned at a known distance D from the output end face. The first fiber is then aligned, so that the optical on the screen is maximized.

Finally the pattern size on the screen A is measured using a calibrated vernier caliper The Numerical Aperture can be obtained from trigonometric relationship:

The fiber image projection method for measurement of fiber diameter

In this method laser beam is swept at a constant velocity transversely across the fiber and a measurement is made of the time interval during which the fiber intercepts beam and casts a shadow on photo detector . The beam from laser operating at a wavelength of 0.6328 m is collimated using two lenses (G1 and G2). It is then reflected off two mirrors (M1 AND M2), the second of driven by galvanometer which makes it rotate through a small angle at a constant angular velocity before returning to its original starting position.

where l is the distance between mirror and photodetector.

The shadow is registered by the photo detector as an electrical pulse of width We which is related to the fiber outer diameter d0 as:

Thus the fiber outer diameter may be quickly determined and recorded on the printer.

This measurement method gives faster diameter measurements ,involve the analysis of forward or backward far field patterns which are produced when a plane wave is incident transversely on the fiber. They tend to give good accuracy. This techniques require measurements of the maxima in the center portion of the scattered pattern from which the diameter can be calculated after detailed mathematical analysis.

Core diameter measurement is also possible from the near field pattern of a suitably illuminated fiber. The measurements may be taken using a microscope equipped with a micrometer eyepiece similar to that employed for offline outer diameter measurements. However, the core cladding interface for graded index fiber is again difficult to identify due to fading of the light distribution towards the cladding rather than sharp boundary which is exhibited in the step index case. 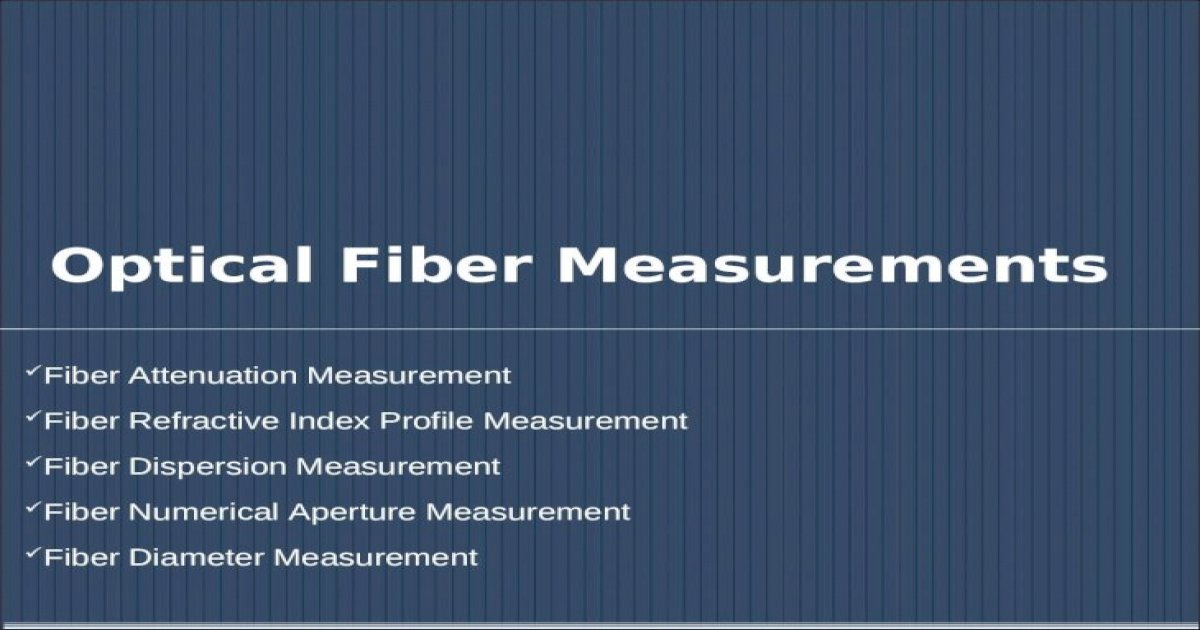 Development and Characterization of Novel Electrospun ... · PDF file Approximately 500 fiber diameter measurements were made per image. Average fiber diameters were calculated and

HEAT TRANSFER OF FIBROUS INSULATION BATTINGS In the present work, laboratory-scale heat transfer measurements were made on regular and fine fiber battings. Measurements are compared