Fluid Identities and Gendered Intimacies: the

Written on the Body

Written on the body is a secret code only visible in certain lights: the accumulations of a

lifetime gather there. In places the palimpsest is so heavily worked that the letters feel

like Braille. I like to keep my body rolled up away from prying eyes, never unfold too

much, or tell the whole story. I didnt know that Louise would have reading hands. She

has translated me into her own book.

Jeanette Winterson, Written on the Body

1. Introduction: Object of Study and Objectives...5

its narrator and a beautiful, married woman called Louise. The novel tackles romantic

relationships, love, loss and sexuality from an experimental point of view and presents an

interesting, challenging feature: a genderless narrator. Winterson has created a narrative where

every reference to the gender of the narrative voice has been carefully omitted, thus engaging

the reader to participate in the construction of both the novel and the narrators identity. For this

reason, I would like to argue that this deliberate play on gender ambiguity places the reader in a

situation where he or she is induced to deconstruct perceptions about sexuality. By refusing to

reveal any information about the protagonist, Winterson undermines and challenges the very

notion of gender and sexuality as the foundation of identity. In this case, I would argue that

performativity. One of the aims of the novel is to deconstruct clichs about gender, love and

with the deconstruction of the language of love, which is written on the body, hence the

importance of the body and its absence. Ultimately,what is interesting is not Wintersons

success or failure to deconstruct binaries, but the readers response to this attempt and what it

1. Introduction: Object of Study and Objectives

Jeanette Wintersons work is regarded as highly experimental, as she subverts

the rules of language and narrative in order to create fluid, elusive characters which

express a particular view on topics such as love, loss, the body, gender and identity.

Written on the Body (1992) is one of her most famous works, together with Oranges are

best lesbian novel in 1994, Written on the Body has often been presented as a lesbian

fiction, though neither the author nor the narrator make such a statement. In fact this

Judith Butlers theory of gender performativity (Butler, 1999), as well as to stress that

the constant play on female/male identities predisposes the reader to a certain reading.

The thesis statement around which this paper turns is that, while gender fluidity

and stereotypes about love, gender and language that she/he avoids.

The recurrent deconstruction of language and topics such as clichs, gender roles,

beliefs, but as this paper will show, gender binaries are still pervasive and impossible to

escape. The reach of the patriarchal society with its heteronormative codes is wide,

affecting bodies in general and womens bodies in particular, as it will be discussed in

the last part of my dissertation. The paper does not place much importance on the plot

Louises husband Elgin, but rather on the representation of this relationship and what it

reveals in terms of power dynamics and heteronormative discourses. The absence of

the narrators different impersonations of both female and male identities, as well as to

comment on the revelatory and frequent absences and silences in the text. Furthermore,

not only rise great expectations in the readers mind, but it is also prone to frustrating

those expectations by not fulfilling them. Written on the Body requires, apart from the

readers suspension in disbelief, his or her participation, exposing the reader to an array

of choices in finding a specific meaning which would fill in the gap. It involves

The narrator makes no reference to his/her signs of identity, such as name, sex,

interests, though he/she often invokes past and present experiences, feelings and

memories, implying that these instances of human experience are more important and

relevant to ones identity rather than institutionalized markers of gender and identity.

The narrative starts in an in media res fashion, with the narrators musings on love:

Why is the measure of love loss? (WB 9). The narrator mixes I and you leaving

the reader at a loss about whether it is the reader s/he addresses or a potential, imaginary

lover. It is not until not until page 20 that the narrator uses the name Louise to refer to

unveil the narrators identity. In her article The Genderization of Narrative (1999),

(pro)nominal expressions (he vs. she; gendered first nouns); implicitly by the

paraphernalia of our heavily gendered culture (handsome vs. beautiful; shirt vs.

blouse) and by the heterosexual default structure (if A loves B, and A is a man,

The narrator avoids explicit gender markers in Written on the Body, but readers can

continuum. At one point the narrator identifies with Alice in Wonderland: I shall call

myself Alice and play golf with the flamingos. In Wonderland everyone cheats and love

is Wonderland isnt it? (WB 10) and Lauren Bacall: I stared at it [the phone] the way

Lauren Bacall does in those films (WB 41), which leads the reader to the spontaneous

in Wonderland. The way other women are depicted in the novel is another key point

which is addressed when trying to define the narrators identity. Apparently the

protagonist sympathizes with women rather than with men, especially in scenes like the

following: At the Clap Clinic the following day, I looked at my fellow sufferers. Shifty

Jack-the-lads, fat business men in suits to hide the bulge. A few women, tarts yes, and

other women too. Women with eyes full of pain and fear (WB 46). The narrators gaze

stops at the mens physical appearance and the comments have a negative, hate 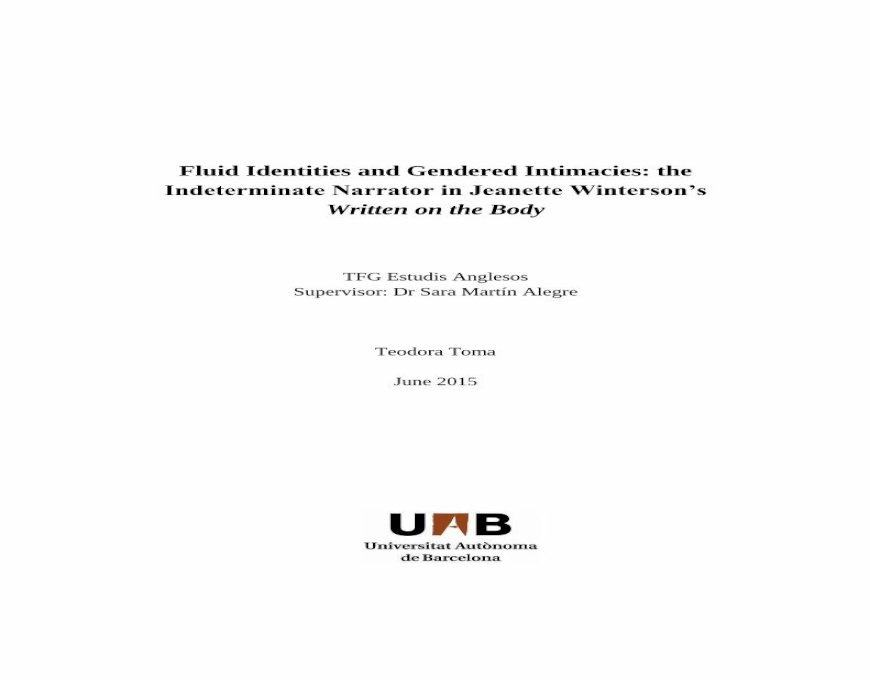