A Fortran Primer: (and cheat sheet)This section will provide a basic intro to most of the commonly occuring features of Fortran that you will need for the course. This list is by no means exhaustive, but it should be enough to get you where you need to go. For more information, We have extensive fortran manuals scattered about the observatory. By the end of this section you should understand the basic data types, the structure of arrays, standard arithmetic operations, loops and conditional statements, subroutines and functions, and basic IO. This section will also briey discuss how to build programs using make and how to debug them using dbxtool/debugger.

C.1 Basic Fortran Concepts and CommandsData types for the most part there will be only three basic types of data you will have to deal with, integers, oating point numbers and characters. In fortran these data types are declared asinteger exact whole numbers (-3, 0, 5 234), usually stored in 4 bytes real inexact representation of decimal numbers (3.1415, 27.2, 1.e23). Usu-

ally stored as 4 bytes, good for about 6-9 signicant digits, ranges from about 1038 1038double precision same as real but much larger range and precision.

Usually stored as 8 bytes, good for about 15-17 signicant digits, ranges from about 10308 10308 . You can get more precision than this but you should have a good reason.character, character*n either a single character or a string of characters of length n.

Constant and Variable names A constant or variable can have any name with up to 32 characters (To play it safe though, Standard Fortran allows only 6 characters). The name must start with a letter, but can have most of the 19

20 alphanumeric characters in it. Fortran also has the annoying feature of implicit typing so that if undeclared, any variable name that starts with the letters i through n are assumed to be integers, everything else is assumed real. Rigorous programming practice suggests that you start every program with implicit none and declare every variable. Its annoying but it keeps you honest. I will try to do this in my programs. A sample program declaration might look like implicit none integer npnts, n real c, dcdt real car(1000),tar(1000) character*40 fileout arrays Perhaps the most important feature for modeling is arrays. Arrays are simply ordered sets of numbers that can be addressed by index. Every array has a name (e.g. car or tar above) and a length (here both car and tar are arrays of real numbers of length 1000). Arrays can be of integers, reals, double precision or even characters (fileout is actually an array of 40 characters). Each member of an array can be addressed as by specifying its index in the array (car(10), tar(n) etc.). Arrays can also have up to 7 dimensions. A two dimensional array a(10,10) can be thought of as 10 1-dimensional arrays of 10 numbers each (a total of 100 elements). Most importantly in fortran, the leading index increases fastest i.e. for a(i,j), the i=1 and i=2 are next to each other in memory. Simple operations integer and oating point numbers and arrays of them can all be operated on by standard mathematical options. The most commonly used arithmetic are= assignment x=y ** exponential a=x**y /, * divide, multiply a=x/y, or a=x*y +, - add subtract a=x+y, or a=x-y

21 to a real, dble(?) converts anything to a double (also operations for complex numbers)

misc. functions see table 6.1 Program ow control Any program will just execute sequentially one line at a time unless you tell it to do something else. Usually there are only one of two things you want it to do, loop and branch. The control commands for these aredo loops Do loops simply loop over a piece of internal code for a xed

number of loops and increment a loop counter as they go. do loops come in the standard line number avour do 10 i=1,n,2 j=i+1 other stuff to do continue

(note the spacing of the line number and starting commands at least 6 characters over is important (stupid holdover from punch cards). Or in the non-standard but more pleasant looking form do i=1,n,2 j=i+1 other stuff to do enddo Do loops can be nested a fair number of times (but dont overdo it) conditional statements Being able to make simple decisions is what separates the computers from the calculators. In fortran separate parts of the code can be executed depending on some condition being met. The statements that control this conditional execution areif a single line of the form

if (iam.eq.crazy) x=5. will assign a 5. to the variable x if the expression in parentheses is true, otherwise it will simply skip the statement. block if statements More useful blocks of execution can be delimited by block ifs of the form if ( moon.eq.full ) then call howl(ginsberg) x=exp(ginsberg) endif the block if statements can also be extended to have a number of condition statements. If there are only two, it looks like if ( moon.eq.full ) then call howl(ginsberg) x=exp(ginsberg)

23 else call wait(1,month) endif or if there are several conditions if ( expression ) then statements galore.... elseif (expression2) more statements elseif (expression3) are you tired of this yet else default statements endif Note: a block if of this type will execute the rst true expression and the jump to the end if (even if several conditions are true). relational operators The statement moon.eq.full is a conditional statement that evaluates to true if the variable moon is logically equivalent to the variable full (dont use = for .eq. very different animals). The operator .eq. is a relational operator that tests for equivalence. Other relational operators are .lt. (lessthan),.le. (less-than-or-equal-to) ,.ge. (greater-than-or-equalto),.gt] (greater-than). Individual conditional statements can also be linked together using the operators .and., .or., .not. (and a few less useful things like exclusive or .xor.. Examples include& if ((moon.eq.full).and.(i.eq.werewolf)) call runlikehell() if ( (x.eq.0.5).or.(i.le.2) ) then x=x*i endif

24 return end Note the variables r and i are dummy variables that hold the place of x and j in the main routine. Subroutines also have dummy variables but are called and dont return a value (although it will often change the values of what it is passed). Example subroutine call would be integer k,j real x(100),a .... j=10 a=2.5 call arrmult(x,j,a) and the subroutine itself would look like subroutine arrmult(ar,n,con) integer n real ar(n),con integer i do i=1,n ar(i)=ar(i)*con enddo return end Note that arrays are passed to subroutines and functions by name. Most importantly, the dimension of the array within the subroutine can be passed. In the above routine, only the rst 10 elements of x are multiplied by 2.5. If we wanted to multiply the elements from 6 to 16 we could also do call arrmult(x(6),11,a) Note that there are actually 11 elements between indexes 6 and 16. In addition, arrays that are declared as 1-D arrays in the main program can be operated on as variable length n-d arrays in a subroutine (and vice-versa). E.g. integer i,j real x(1000),a ... i=10 j=10 a=2.5 call arrmultij(x,i,j,a)

We will make extensive use of this feature for efcient programming in ndimensions. This is the one thing you cannot do well in C which is a real shame. Input/Output The last important thing you might want to do is actually read information into a program and spit it out. This is perhaps the worst part of fortran, particularly when dealing with character strings. Nevertheless, with a few simple commands and unix, you can do most anything. A few important io concepts logical units and open uggh, in fortran, les are referred to by logical units which are simply numbers. To open a le called junk.txt with logical unit 9 you would do something like lu=9 open(lu,file=junk.txt) The two most important les stdin and stdout already have logical units associated with them. stdin is 5 and stdout is 6. reading a le to read data from a le you use the read statement. The principal version of this you will need to read things from the keyboard or from stdin looks like read(5,*) tmax,npnts,(ar(i),i=1,3) the 5 is the logical unit and the * says to just read in each datatype as whatever it was declared as so if tmax and ar are real and npnts is an integer it will assume that the numbers in stdout will be in those formats. Note the funny way of reading 3 items of array ar is known as an implicit do loop useful but clunky. writing to a le to write data from a le you use the write statement which works just like read i.e.write(6,*) here are some numbers ,tmax,npnts,(ar(i),i=1,3) write(9,*) Howdy

a synonym for write(6,*) is the print statement i.e.

is equivalent to the rst of the above two lines.

A Few pointers to good coding

Comment liberally Always write your code so that 6 months (or two weeks) from now you know what it does. comment lines start with a c in the rst column or after a ! in any column (the ! comment is non-standard so be careful). make 1 code to do 1 thing , Super-duper multi-purpose codes with hundreds of options become a nightmare to maintain and debug. Since youre only writing private code for yourself, I nd it is most sensible to create separate programs for each difference in boundary or initial conditions etc. Using make and makefiles can simplify this process immensely. This way if you try something and it doesnt work, you can just go back to a previous version. Write your loops right Always write your loops with the computer in mind. i.e. your inside loop should always be over the fastest increasing index. This will give the biggest increase in performance for the least amount of work. NO GOTOs except in dire need avoid uncontrolled use of the goto statement as it will lead to immense confusion. See the rst chapter of Numerical Recipes for the few necessary controlled uses of goto. limit ifs and functional calls within array loops If a loop is designed to quickly handle an array, an embedded if statement or heavy function calls can destroy performance (although many optimizing compilers will do some strange things to try and prevent this). keep it simple and conservative There are loads of fancy extensions in Sun fortran that might not work on other machines. The less fancy gee-gaws you use the less you have to replace when you change platforms use dbxtool/debugger and make see below and man pages, these tools will make your life much easier for organizing and debugging code. 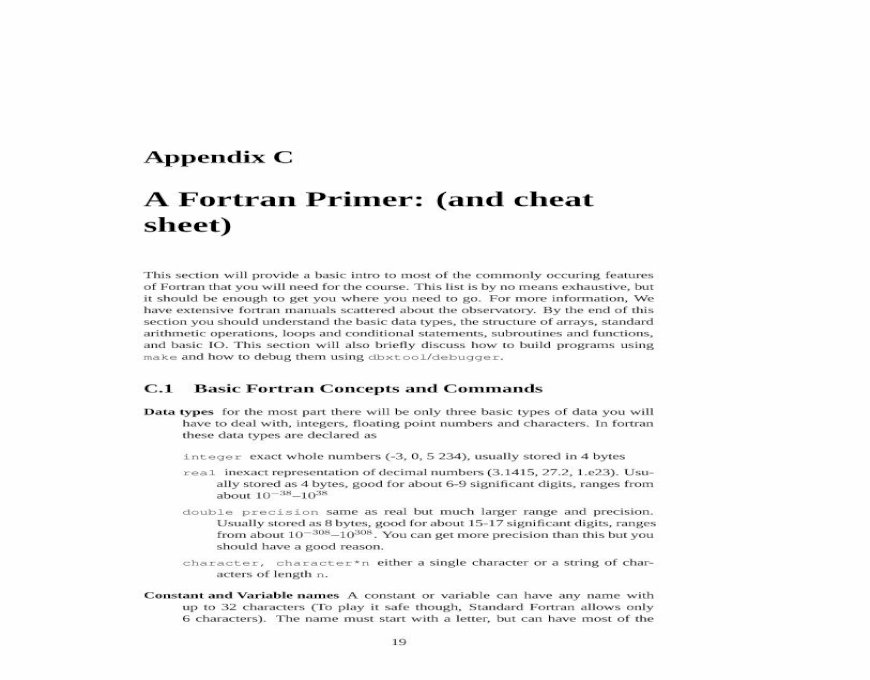