2. Fiverr Background *Worlds largest marketplace for small services* Launched in 2010 by Israeli entrepreneurs ShaiWininger and Micha Kaufman Now have about 1,000,000 gigs posted 3. Fiverr Background Basic How-To: Post a skill (through pictures and videos) Offer to sell it for $5 Go up in status with more buys Can be a skilled professional oran amateur Skill Categories: Gifts, Graphics & Design, Video & Animation, OnlineMarketing, Writing & Translation, Advertising,Business, Programming & Tech, Music & Audio, Fun& Bizarre, Lifestyle, and Other 4. Fiverr Background Users go up in levels once they consistently: Gain great customer satisfaction Deliver gigs on time Maintain high quality and ratings Levels allow for : Profits greater than $5 per gig Distribution in multiple amounts Ability to add extras to gig Recognition to promote profile 5. Case Study- "bookreviewstew" Actor selling videoservices, such asbirthday greetings andpromo videos Fiverr accounts for 60%of his income Makes sure to maintaincustomer satisfaction atall times Tips for new users: Usepopular gigs forinspiration 6. Case Study- "anarchofighter" In just one year of posting his services on Fiverr,"anarchofighter" was able to buy a house from his Fiverrearnings Offers business services, such as brand promotion onlocal media and copywriting Gig Extras include individual videos with improvementsand super fast service 7. Fiverr Survey ResultsTotal Participants: 24 Fiverr Members 8. Fiverr Results Cont. Dollars Made Per Week 9. Fiverr Survey Cont. Hours Spent on Fiverr Per Week 10. Fiver Survey Cont. 58.3% of participants hope to become a success storyon Fiverr while 41.7% are simply on Fiverr for the fun ofit. 66.6% of participants use Fiverr as a primary source ofincome while one 33.3% of participants hold a separateprimary form of employment. 75% of participants stated that they do have more thanone talent/service they offer on Fiverr. While only 25%hold only one talent/service on Fiverr. 83% of participants intend to be using Fiverr a year fromnow while only 17% intend to give up on Fiverr at somepoint. 83% of participants stated that Fiverr has in fact helpedtheir career either financially or socially. 11. Fiverr Survey Cont. This survey was conducted on the official Fiverr blog on twoseparate discussion boards in order to obtain a variety ofusers. Each participant is a registered Fiverr.com user. We wereable to verify this because in order to comment on the blogyou need to be a Fiverr.com user. Overall, 83% of the participants surveyed said that they havehad success on Fiverr. For those who did not have success on Fiverr.com, which theexception of one, did not post multiple talents/services and allspent less than 5 hours a week on Fiverr.com. Individuals who reported collecting more than $100 per weekall spent between 10 and 30 hours per week on Fiverr.comand offered several, if not more, talents/services. 12. We Made Our Own Gig!Lets See Our Success Gig was posted for 10 days Promised delivery time of 3 days Shared on my facebook and twitter accounts Checked account everyday 13. And......We Got No Hits!What I think went wrong.... Not enough gigs were posted Not enough time was spent on fiverr Most top sellers have videos of what they areoffering or sample pictures Sellers offer additional services to a gig 14. Conclusion Successful Fiverr sellers spend more than 5 hours a week on the website. Having more than one active gig at the same time gives the seller a better chance of getting a hit. Most people anticipate to still be using Fiverr a year from now. Most Fiverr users have hopes of becoming success stories like the ones posted on the site. More people use it as their primary source of income. 15. Conclusion The results of our survey indicates that Fiverr canbe a successful way to make money if the sellerdedicates a lot of time to the site. Just like any otherjob, you have to put in the time to make a profit.Fiverr allows flexibility in hours and the amount ofwork varies depending on the gig. Although becoming a success story is notguaranteed sellers hope to achieve this status andare willing to put in the work to get there. If usersare able to master the site and market themselveswell they do have a chance in achieving top ratedstatus. 16. Bibliography http://blog.fiverr.com/2013/02/26/bought-a-house-with-fiverr-money/#more-5851 http://blog.fiverr.com/2013/03/22/actor-making-money-online/#more-6025 http://fiverr.com/terms_of_service 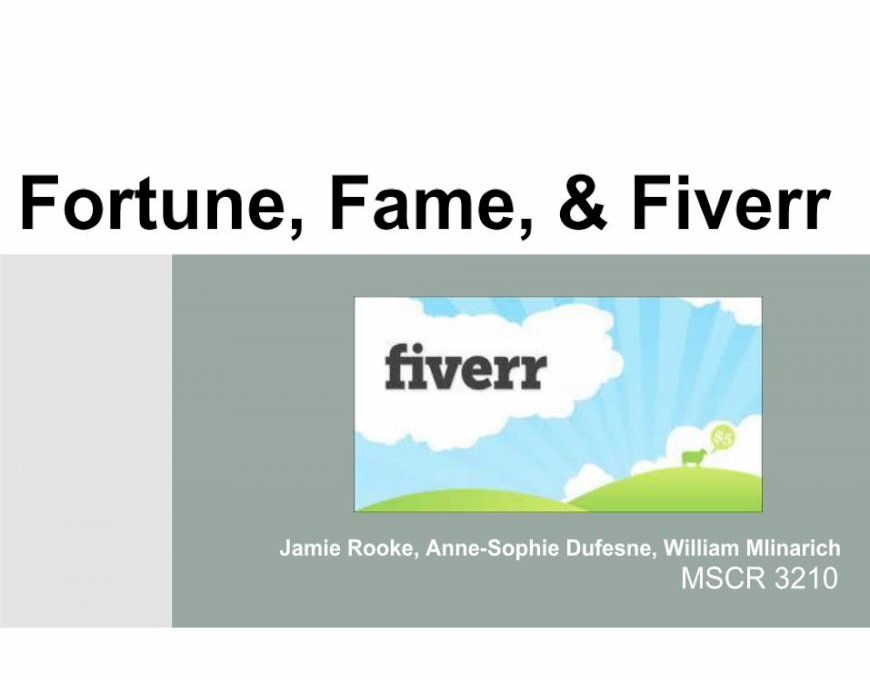 Kameron Butler.  Some say the answer to success is: ◦ Fame ◦ Fortune

Changes in Fame and Fortune: A Phenomenological Study of

Fame, Fortune, and Exploitation: The Fascinating History of Patents and Patent Trolls

Fame and Fortune from Open Source

Web Hosting for Fame and Fortune