DownloadReport this document
Share this document with a friend
Description:
Outlining interesting Political Science students at the College of Charleston.
Transcript:

Kristin Barcak has seen the face of AIDS, in more ways than one. Not only has she seen it through her lobbying and political activism, but shes seen HIV turn to AIDS and claim the life of her favorite aunt in the early 90s. At the time, medicine to ease the effects of the disease was extremely scarce in the U.S., and Barcaks aunt suffered all the way to her death. A few years later, AIDS medication became more available, but only in expensive name-brand form. With big name-brand companies guarding their patents, Barcak felt a strong need to explore the benefits and availability of generic medications. She asked political science professor Philip Jos how to find a summer 2006 internship related to her cause. Jos guided her to the Health Global Access Projects Web site, where she eagerly applied. Once accepted, she went to the projects home base in Philadelphia where she worked on an international level with organizations such as the U.N.s World Health Organization, and also nationally, analyzing George W. Bushs policy for AIDS money. Barcak also worked on a bill promoting the training of health care workers in Africa. And, at the World AIDS conference in Toronto, which Bill Clinton and Bill Gates also attended, Barcak took activism to the ultimate level, when she disguised herself as a staff member and made quite a political statement. Once inside, she released helium ballons tied to doctors lab coats, which teetered conspicuously beneath the conference room ceiling. The statement-making jackets read Universal access=billions 4 health care workers now. Barcak will graduate in May of 2007, and plans to take a year off before continuing her political career at law school.

C of C poli SCi StudentS find great SuCCeSS witHin reaCHBy Nicole NoBleStaff WriterPolitics, for John Connor Cleveland has always been dinner table fodder. So when he headed to C of C, a degree in political science was an easy choice. Clevelands political path continued to be a steady, methodical journey until the time for an internship arose. Working completely independently, Cleveland applied for an internship for the summer of 2006 in Sen. Lindsey Grahams office. He won the internship. At the beginning of the summer, Cleveland moved to Washington D.C., where his everyday duty of opening the mail echoed the responsibilities of canaries sent underground by miners to check for poisonous gasses. As Cleveland says, If one of us died of Anthrax, theyd shut down the office. Two of Clevelands other intern duties, answering phone calls and guiding tour groups through the Capitol Building and the Senate office buildings, proved to be less dangerous tasks. Most of the people he communicated with during this part of his job were supporters of Sen. Graham. Now a senior, Cleveland is finishing up a second major in History, and having met all of the requirements of his political science degree, hes currently considering his post-graduate options. Law or campaign work may be in his future, but if you ask him, his first response will be that he is moving to Colorado to become a ski bumat least for a year. After four years of diligent studies, hes ready for a vacation from the books. But with the 2008 elections approaching, he may find himself drawn to the campaign trail again. As for politicians, Cleveland says, I dont know who my favorite is yet, because I dont know who Ill be working for.

Helen Van Wagoner sent her college application to C of C with her mind on a nursing career. But by the time she enrolled, she had added World Politics to her course list and shifted her attention to foreign relations and global issues. After a short stint in science, she declared her political science major freshman year and moved from course to course in the department, enlivened by a future that could combine travel opportunities with a career. Van Wagoner sighted the International Education of Students table at a study abroad fair and in a matter of months, she was jetsetting to a study abroad program in Amsterdam to explore her Dutch heritage while continuing to expand her world view. When the program ended, Van Wagoner wasted no time. She researched internship opportunities on the U.S. State Departments Web site and moved on to a political internship at the U.S. Embassy in the Hague, Netherlands. But Van Wagoners internship went far beyond a coffee girl. She likens her position as a pseudo foreign service officer and describes tasks such as researching information on Croatia for the U.S. ambassador before a meeting of ambassadors and meeting with a Dutch diplomat in charge of affairs in Southeast Asia. And thats not all. Van Wagoner also spent the fall 2006 semester studying at the University of Oxford in England, enrolling in courses such as Eastern European politics and English literature. Currently back in her American homeland, Van Wagoner plans to graduate in May of 2007, is considering the London School of Economics and Oxfords masters program, has applied for a scholarship to study Arabic in Jordan and is setting her sights on a career as a real foreign service officer.

How do they do it?With two states wedged between South Carolina and Washington, D.C., politics would seem like an interest pursued more by students at Georgetown University than C of C. But currently there are a number of political science students extending their reach abroad, including sophomore Emily Correale and junior Deborah Plant, who are both studying in South Africa, and junior Ladd Bayliss, who is in Kenya. Junior Matt Seager, another exceptional student, recently interned with Vermont senator James Jeffers. With so many students exploring politics nationally and internationally, some may wonder how these students secured such great opportunities. Are there sub-pages on Cistern Online that just arent accessible? Where are the fliers on study abroad programs in South Africa? The secret, it turns out, is not a secret so long as the student takes the first step, which is as easy as talking with your advisor. In fact, the overarching trend of many political science majors who have completed study abroad programs and internships comes down to one word: initiative. This especially includes the profiled students, who all either obtained their programs indepen-

dently or took the initiative to ask an advisor or professor. Luckily for these students, the Political Science department seems to be holding their end of the deal, by effectively helping their students achieve their goals. Even if these students advisors did not have the resources to help them, they immediately directed them to a more knowledgeable person on the topic. Political science professor Dr. Philip Jos said that when his advisees come to him and start asking questions about internships, he suggests they meet with department chair Dr. Lynne Ford. For study abroad he refers them to Dr. Guoli Liu, who has taken groups to Asia, or to Dr. Jack Parson, the former Director of the Office of International Education and Programs. Parson also acts as a liaison between interested students and programs and has referred students to internship coordinator Erin Blevins. When Parson meets with students about study abroad opportunities, he says he asks them about their interests, their goals and the reasons for their curiosity, in order to help them identify programs that meet their needs. But once the program is defined (and this

A talented junior golfer with heroes who include Payne Stewart and Tiger Woods, David Butler graduated from high school simply wanting the college experience, rationalizing that C of Cs namesake city could give him what he wanted. Unfortunately for his golf game, but fortunately for Washington, D.C., Butler found his niche while taking American Government and declared as a political science major his sophomore year. Political department chair Dr. Lynne Ford served as an advisor to Butler, guiding him to the C of C Honors College where he learned of a program offered through the University of South Carolina. Once he applied, interviewed and was accepted, Butler journeyed to the District for a position as a semester-long fellow for Sen. Lindsey Graham, where he gave tours of Sen. Grahams office and the Capital Building. A number of people asked Butler for photos and autographs, he says, because they believed in his future success and that his signature would one day be very valuable. Shortly after arriving back at C of C, Butler continued his hard work when he teamed up with senior Kristen Munzie as a campus chair for Sen. John McCains exploratory committee. Now, Ford guides students to Butler. You could say Butler has executive-sized dreams of an oval tradition, and with a Rolodex full of government contacts, you may be right. And, with his Facebook group devoted to the organization Peace One Day topping out at just short of 400 members, a political platform could be in the making. But even with his whispers of open S.C. House District seats, for now Butler remains content with four flat walls of his studio office suite.

goes for internships as well), political science advisors step back and let the students do the grunt work. Applications, cover letters, follow-up phone calls and travel arrangements become the responsibility of the student, and if help is needed, again, students must take the initiative to ask for it. College-wide, the increase in opportunity for internships and independent studies has been a goal ever since former president Leo Higdons Fourth Century Initiative plan debuted in 2002. And though the political science department seems to be effective in producing exceptional grads, students give a lot of credit to the Honors College and the International and Education Programs department as well. The problem keeping more students from taking advantage of the opportunities available to them is not that the departments will not help students, but that students do not know where to look or who to ask about these opportunities.

One of the goals of the First Year Experience, part of the Fourth Century Initiative, is to increase students knowledge of who to talk to. Goss says that the implementation of the new Quality Enhancement Plan, which covers the improvement of the First Year Experience, plays right into what we want to accomplish in the advising center. This accomplishment includes giving students the information so they can move into their major and build faculty relationships, Goss says. And many of the most accomplished C of C students agree that building strong relationships with faculty has helped them tremendously in both academics and career aspirations. With an internship coordinator in every department, C of C students will likely continue challenging themselves with high-stake internships and study abroad programs. Contact Nicole at [email protected] 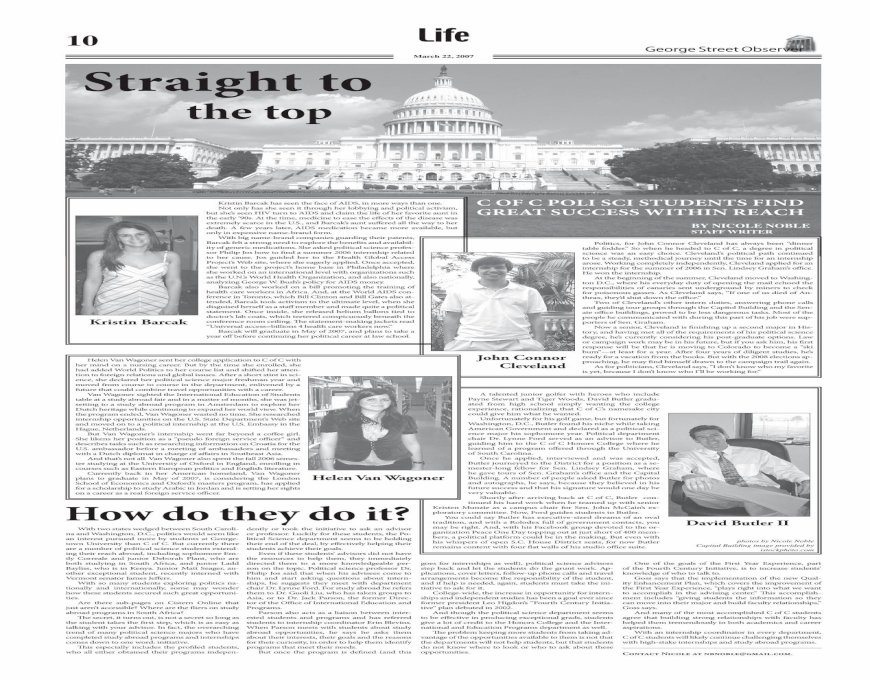 GSO 540 Tip GSO BV Sparker Source · PDF file When combined with the GSO 24 element single channel mini streamers, the GSO-540 can be used as a reliable and low maintenance source