HERETICS - Chesterton · PDF file2-G. K. Chesterton and it failed altogether in its object....

This edition copyright 2010 Sam TorodePrinted in the USA

Introductory Remarks on the Importance of Othodoxy 1

On the Negative Spirit 7

On Mr. Rudyard Kipling and Making the World Small 13

Christmas and the Aesthetes 36

Omar and the Sacred Vine 41

The Mildness of the Yellow Press 46

The Moods of Mr. George Moore 53

On Sandals and Simplicity 56

Science and the Savages 60

On Certain Modern Writers and the Institution of the Family 77

On Smart Novelists and the Smart Set 85

On Mr. McCabe and a Divine Frivolity 94

The Fallacy of the Young Nation 108

Slum Novelists and the Slums 117

Concluding Remarks on the Importance of Orthodoxy 125

Nothing more strangely indicates an enormous and silent evil of modernsociety than the extraordinary use which is made nowadays of the wordorthodox. In former days the heretic was proud of not being a heretic. It was thekingdoms of the world and the police and the judges who were heretics. He wasorthodox. He had no pride in having rebelled against them; they had rebelled againsthim. The armies with their cruel security, the kings with their cold faces, the deco-rous processes of State, the reasonable processes of lawall these like sheep hadgone astray. The man was proud of being orthodox, was proud of being right. If hestood alone in a howling wilderness he was more than a man; he was a church. Hewas the centre of the universe; it was round him that the stars swung. All the torturestorn out of forgotten hells could not make him admit that he was heretical. But afew modern phrases have made him boast of it. He says, with a conscious laugh, Isuppose I am very heretical, and looks round for applause. The word heresy notonly means no longer being wrong; it practically means being clear-headed andcourageous. The word orthodoxy not only no longer means being right; it prac-tically means being wrong. All this can mean one thing, and one thing only. It meansthat people care less for whether they are philosophically right. For obviously a manought to confess himself crazy before he confesses himself heretical. The Bohemian,with a red tie, ought to pique himself on his orthodoxy. The dynamiter, laying abomb, ought to feel that, whatever else he is, at least he is orthodox.

It is foolish, generally speaking, for a philosopher to set fire to another phi-losopher in Smithfield Market because they do not agree in their theory of theuniverse. That was done very frequently in the last decadence of the Middle Ages,

and it failed altogether in its object. But there is one thing that is infinitely moreabsurd and unpractical than burning a man for his philosophy. This is the habit ofsaying that his philosophy does not matter, and this is done universally in thetwentieth century, in the decadence of the great revolutionary period. General theoriesare everywhere contemned; the doctrine of the Rights of Man is dismissed withthe doctrine of the Fall of Man. Atheism itself is too theological for us to-day.Revolution itself is too much of a system; liberty itself is too much of a restraint.We will have no generalizations. Mr. Bernard Shaw has put the view in a perfectepigram: The golden rule is that there is no golden rule. We are more and more todiscuss details in art, politics, literature. A mans opinion on tramcars matters; hisopinion on Botticelli matters; his opinion on all things does not matter. He mayturn over and explore a million objects, but he must not find that strange object,the universe; for if he does he will have a religion, and be lost. Everything mat-tersexcept everything.

Examples are scarcely needed of this total levity on the subject of cosmicphilosophy. Examples are scarcely needed to show that, whatever else we think of asaffecting practical affairs, we do not think it matters whether a man is a pessimistor an optimist, a Cartesian or a Hegelian, a materialist or a spiritualist. Let me,however, take a random instance. At any innocent tea-table we may easily hear aman say, Life is not worth living. We regard it as we regard the statement that it isa fine day; nobody thinks that it can possibly have any serious effect on the man oron the world. And yet if that utterance were really believed, the world would standon its head. Murderers would be given medals for saving men from life; firemenwould be denounced for keeping men from death; poisons would be used as medi-cines; doctors would be called in when people were well; the Royal Humane Soci-ety would be rooted out like a horde of assassins. Yet we never speculate as towhether the conversational pessimist will strengthen or disorganize society; for weare convinced that theories do not matter.

This was certainly not the idea of those who introduced our freedom. Whenthe old Liberals removed the gags from all the heresies, their idea was that religiousand philosophical discoveries might thus be made. Their view was that cosmictruth was so important that every one ought to bear independent testimony. Themodern idea is that cosmic truth is so unimportant that it cannot matter what anyone says. The former freed inquiry as men loose a noble hound; the latter freesinquiry as men fling back into the sea a fish unfit for eating. Never has there been solittle discussion about the nature of men as now, when, for the first time, any onecan discuss it. The old restriction meant that only the orthodox were allowed todiscuss religion. Modern liberty means that nobody is allowed to discuss it. Good

But there are some people, neverthelessand I am one of themwho thinkthat the most practical and important thing about a man is still his view of theuniverse. We think that for a landlady considering a lodger, it is important to knowhis income, but still more important to know his philosophy. We think that for ageneral about to fight an enemy, it is important to know the enemys numbers, butstill more important to know the enemys philosophy. We think the question is notwhether the theory of the cosmos affects matters, but whether in the long run,anything else affects them. In the fifteenth century men cross-examined and tor-mented a man because he preached some immoral attitude; in the nineteenth centurywe feted and flattered Oscar Wilde because he preached such an attitude, and thenbroke his heart in penal servitude because he carried it out. It may be a questionwhich of the two methods was the more cruel; there can be no kind of questionwhich was the more ludicrous. The age of the Inquisition has not at least the disgraceof having produced a society which made an idol of the very same man for preachingthe very same things which it made him a convict for practising.

Now, in our time, philosophy or religion, our theory, that is, about ultimatethings, has been driven out, more or less simultaneously, from two fields which itused to occupy. General ideals used to dominate literature. They have been drivenout by the cry of art for arts sake. General ideals used to dominate politics. Theyhave been driven out by the cry of efficiency, which may roughly be translated aspolitics for politics sake. Persistently for the last twenty years the ideals of orderor liberty have dwindled in our books; the ambitions of wit and eloquence havedwindled in our parliaments. Literature has purposely become less political; poli-tics have purposely become less literary. General theories of the relation of thingshave thus been extruded from both; and we are in a position to ask, What have wegained or lost by this extrusion? Is literature better, is politics better, for havingdiscarded the moralist and the philosopher?

When everything about a people is for the time growing weak and ineffective,it begins to talk about efficiency. So it is that when a mans body is a wreck hebegins, for the first time, to talk about health. Vigorous organisms talk not about

their processes, but about their aims. There cannot be any better proof 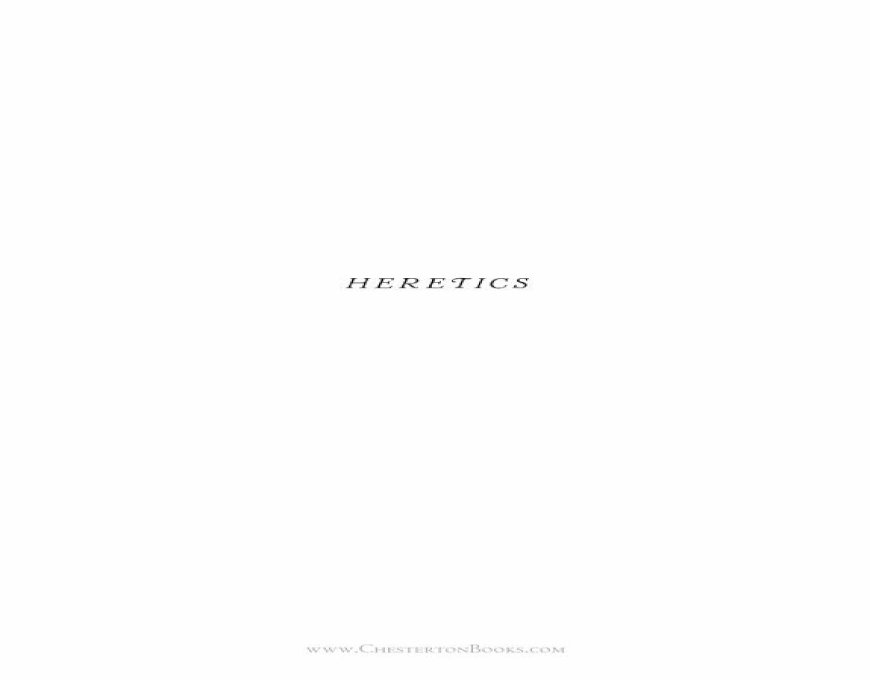 Heretics in the holy church