Was built in 1986 : using Victorian-era chandelier to floor tiles

Adopted Malay culture into theirs

Staff will give briefing during the visit : Not allowed to take photo

Purpose : To protect cultural heritage for future generation to learn, experience and see.INTRODUCTION

The word Peranakan comes from the Malay and Indonesian word, anak or child, referring to locally born descendants.

When migrants travelled from their home country, some began to adopt the local culture and inter-married with the locals.

The beginnings of the Peranakan Chinese in South East Asia date back to the twelfth century, when Chinese traders intermarried with local women and adopted South East Asian social practices and the local language.

Peranakan Chinese FamilyChan Cheng Siew had married with Chee Gee Geok Neo who was a Kapitans of Malacca in early 19th Century. She was fondly known in the family as Fat Mother, Mak Gemuk.

Chen Siew , a Towkay Cermin Mata change the plantation of Gambier to rubber after seen Malacca as the good locations for growing rubber tree. He also known to have held many ronggeng nights filled with wine, women and song.

In 1919, Chen Siew was died and leaving a wife with three mistress. The eldest mistress Choo Way Neo, or Nenek Cho, The two younger mistresses were Maggie Tan Ah Moy and Tan San Yeok, and the only one legitimate son, Chan Seng Kee who was match-married to Ho Joo Suan who is came from a Peranakan family.

Seng Kee who is not interested to live in the busy town, built a house by the seaside that was completed in 1932 and moved his family to stay there before and during the war.

For many years, the house be an office and ancestral home for prayers & opened by the family to the public in 1985 and being managed by the seventh generation.BACKGROUND Baba Nyonya CON..

SWOT ANALYSISSTRENGTHSPreservation and conservation of building Storing the uniqueness of furniture and the design of the building. Knowledge about the histories in malacca Near with the other attraction places ( Jonker Walk, The Stadthuys, St.Paul Hills (A Famosa)and Malacca River)WEAKNESSESLess number of domestic touristsCostly for domestic tourists = money, time and energyNarrow streets, roads congestions and limited signageOPPORTUNITIES Job opportunity for local peopleIncrease income for local peopleIncrease knowledge of the local peopleIncreasing the development around the areaTHREATSCongestionEnvironmental damages and pollutions (air pollution, noise pollution and land pollution)Social problem and cross cultural impact

RECOMMENDATIONWorth for the new future generation can see and learn.Sustainable tourist : i) attract to heritage site ii) learn about the historyLocal authorities and organization must protecting and preserving the heritage site.Enacted : for ensure heritage site not diminished High-quality information must providedStaffs at Baba and Nyonya Museum are really preserve and protect the museum

CONCLUSIONHeritage Tourism can be listed as one of the most important type of tourism.More interested and appreciate in heritage and historical sites and buildingsImportant to preserve our cultural heritageA chance to learn more about our culture and historyHistoric preservation to maintain its value so that the new generations can experience and appreciate more about our history Heritage tourism can describing psychological on the psychology-tourism interference that suitable for everyone, children, teenagers, adult and elderly who are enthusiasm on the historyAuthorities and organizations can responsible to make sure heritage and historical places in Malaysia are fully conserved and preserved systematically 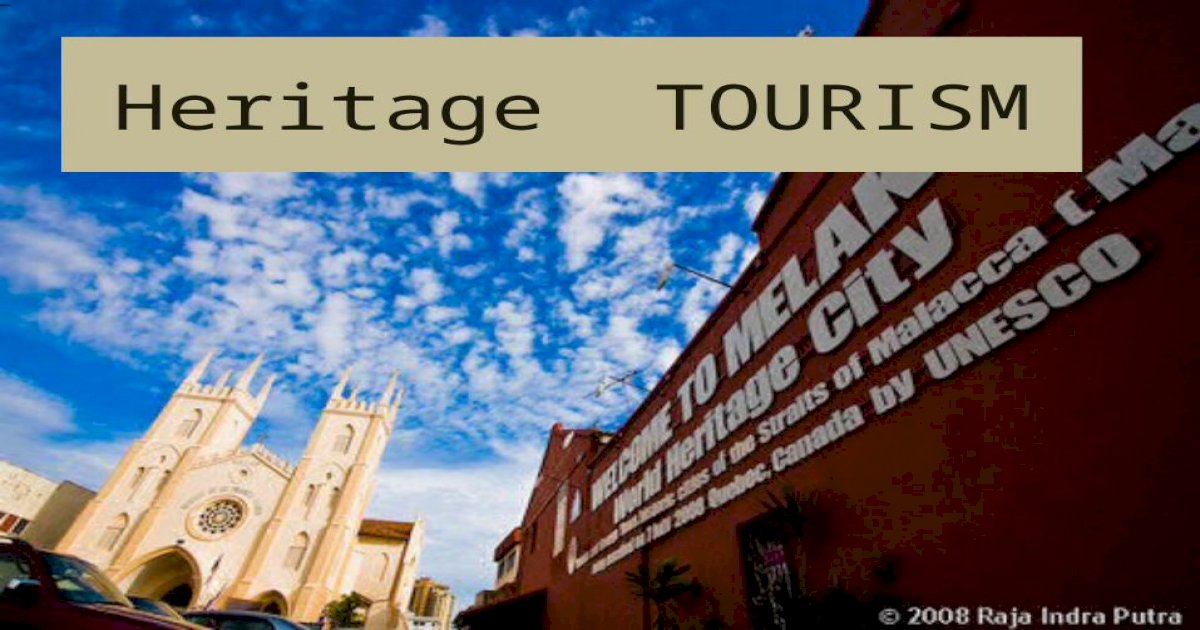 Heritage Tourism at the Historical Town of Malacca ... · PDF file Malaysia tourism product and activities being provided during Visit Malaysia Festival such as angling activities,