DownloadReport this document
Share this document with a friend
Transcript:
HOARDING Hoarding has 3 parts: acquiring and not discarding a large
number of possessions that appear to be useless or of limited
value; living spaces that are not able to be utilized for what they
are designated for; and significant distress and impairment of
functioning as a result of the hoarding
Living spaces that are not able to be utilized for what they are
designated for is what defines hoarding from a pack rat
Squalor is filthy, unsanitary conditions of home and self. They
can exist apart from each other (dirty homes are not the same as
hoarding and some hoarding homes are clean) examples of
squalor is soiled clothing, doesn’t bathe, rotting food and
feces/urine in living environment
Hoarding-Why does it happen?
Executive functioning is impaired
Saving of items typically begins around age 13
Usually do not get help until age 50 mostly because it takes
decades to acquire that much stuff, and most people who hoard
do not seek treatment on their own (although clean hoarders
typically will)
Tend to be single and live alone (prefer to be alone with their
stuff as it doesn’t let them down like people do)
Family history of hoarding is common (genetic among first
degree relatives)
help (red tagged and other interventions such as APS)
HOARDING – Diagnostic Criteria
To be done by someone who goes to the home
Perception is off so do not seek help for themselves
Homes Assessment
OCD, and was listed under both diagnoses in the DSM-
IV-TR
hoarding seems to be independent from other disorders
Recent functional brain imaging studies suggest a different
pattern of brain activity in people with hoarding versus
other OCD symptoms. All of this data supports the
separation of hoarding from OCD and that change is now
reflected in the new DSM-V.
HOARDING – Brain Functioning
In a study that was done the brain activity of patients with hoarding was compared to those of non-hoarding OCD patients and those without any psychiatric disorder. The results showed that the patients with hoarding had a unique brain activity pattern when compared to the two other groups.
One hypothesis is that the symptoms of hoarding may be caused by less activity in a part of the brain called the cingulate cortex. This area connects the emotional part of the brain with the parts that control higher-level thinking. Lessened activity in these parts of the brain can cause severe problems in making decisions, emotional problems and other though-based problems commonly seen in hoarders.
HOARDING - Medications
does not respond well to standard pharmacology.
There are no medications that target hoarding
In retrospective studies, hoarding predicted a poor
response to serotonergic medications
- Current living situation
- Current hoarding symptoms
- History of hoarding
relationships)
- Multimodal Approach
- Motivational Interviewing
directive method for enhancing intrinsic motivation
to change by exploring and resolving ambivalence
- Originally developed for substance abuse work
- Based upon partnership between client and
therapist
the less good reasons, the pros and cons, costs and
benefits, of hoarding and cleaning up
- Decisional Balance Sheet
HOARDING – Therapeutic Interventions
- What is the most important priority in your life
right now?
that priority/goal?
conflict with important/future goals they are more
likely to consider changing their behavior
HOARDING – Therapeutic Interventions
Benefits Costs
-avoid decision making - hard work
-don’t have to clean - emotional stress
HOARDING – Therapeutic Interventions
CBT addresses 3 areas of problematic thinking that
result in:
- Compulsive Acquisition
- Disorganization/Clutter
- Hoarding of possession involves 3 types of impairments
1. Information-processing
2. Emotional attachments to possessions
3. Distorted beliefs about possessions
- Avoidance of each of these problems leads to the chaos and clutter
HOARDING – Therapeutic Interventions
- Goals of CBT related to compulsive hoarding:
*Stopping compulsive acquisition
* Changing unhealthy beliefs
*Changing thinking styles
* Identify true memory problems and teach methods to assist memory
* Skill building
*Identify-saver; bargain hunter
*Set rules for acquiring
healthy behaviors
-Emotional attachment problems
*Excessive sentimental attachment
-Erroneous beliefs
Usually a lot of combustibles in a hoarders home
Can fire and rescue get into home/apartment safely to
care for individual?
Pest control issues
HOARDING – Housing Codes
Structure safety
Is the apt or home able to hold the weight of hoarded items? Is the building structurally sound.
Difficult for Maintenance Staff to maintain a hoarders home/ apt as sometimes it is not safe for staff to enter facility
HOARDING – Housing Codes 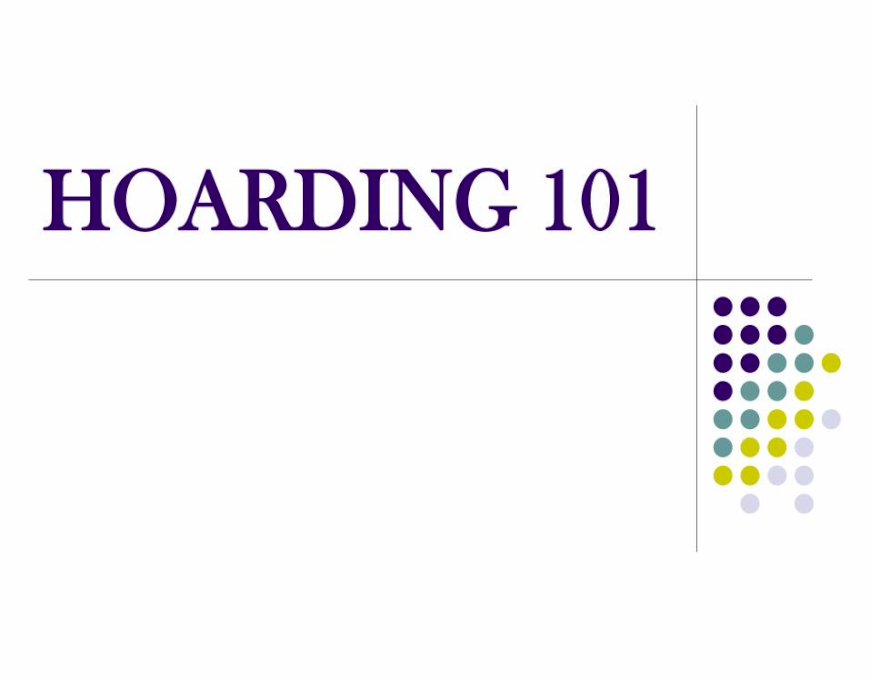