Behind Closed Doors: The Horrors of Hoarding

DEFINITION Hoarding is defined as the acquisition of, and inability to discard, worthless items even though they appear (to others) to have no value. Hoarding and saving behavior has been observed in several neuropsychiatric disorders, including schizophrenia, dementia, eating disorders, autism, and mental retardation , as well as in nonclinical populations , but it is most commonly found in patients with OCD.

Difference 1- The hoarders show a unique pattern of Brain activity.2- Don't respond well - if at all - to standard anti-obsessional treatments.(drugs and CBT).3- Hoarders do not come forward for treatment.4- Hoarders tend to believe they are acting rationally and have less insight to the problem.5- hoarders had more severe family and social disability, anxiety, depression, and personality disorder symptoms

Symptoms and Signs1-Frost and colleagues have argued persuasively that hoarding and saving symptoms are part of a discrete clinical syndrome that also includes indecisiveness, perfectionism, procrastination, difficulty organizing tasks, and avoidance

Symptoms and Signs2-Compulsive hoarding is most commonly driven by obsessional fears of losing important items that the patient believes will be needed later, distorted beliefs about the importance of possessions, and excessive emotional attachments to possessions

Symptoms and Signs3-Hoarders usually fear making "wrong decisions" about what to discard and what to keep, so they acquire and save items to prepare for every imaginable contingency.

Symptoms and Signs5-Living spaces become sufficiently cluttered to preclude the activities for which they were designed, causing significant impairment in social and/or occupational functioning associated with poor response to medications and cognitive behavior therapy.

Symptoms and Signs6- Reluctance or inability to return borrowed items. As boundaries blur, impulsive acquisitiveness could sometimes lead to kleptomania or stealing.7- A survey of elderly hoarders found that hoarding constituted a physical health threat to 81% of identified patients, including the threat of fire hazard, falling, unsanitary conditions, and an inability to prepare food.

SubtypesBook hoardingBibliomania is an obsessive-compulsive disorder involving the collecting or hoarding of books to the point where social relations or health are damaged. Animal hoardingAnimal hoarding involves keeping higher than usual numbers of animals as pets without having the ability to properly house or care for them, while at the same time denying this inability.

Hoarding and Genetics higher rates of hoarding and tics in the first-degree relatives . Compulsive hoarding also has a different pattern of genetic inheritance than other OCD symptom factors. The hoarding/saving symptom factor has a recessive inheritance pattern, whereas the aggressive/checking and symmetry/order symptom factors show a dominant pattern . A genome-wide scan conducted in sibling pairs with Gilles de la Tourettes syndrome found that the hoarding phenotype was significantly associated with genetic markers on chromosomes 4q34-35, 5q35.2-35.3, and 17q25

Behind Closed Doors: The Horrors of Animal HoardingBy Rebecca Simmons To someone desperate to find a home for a litter of kittens, the Chubbers Animal Rescue would have appeared to be the perfect haven. Nestled in a wooded lot in Caroline County, Maryland, the former 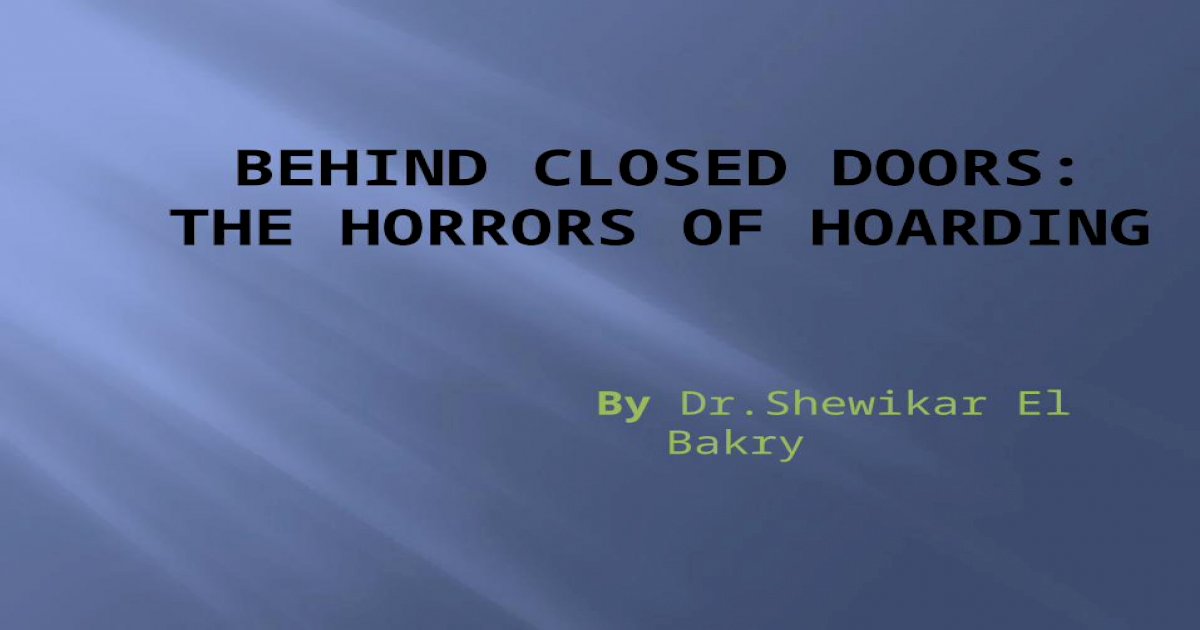