I ching by Richard Wilhelm

DownloadReport this document
Share this document with a friend
Description:
The I Ching, or Book of Changes, a common source for both Confucianist and Taoist philosophy, is one of the first efforts of the human mind to place itself within the universe. It has exerted a living influence in China for 3,000 years, and interest in it has been rapidly spreading in the West. Carl Jung Depth Psychology Blog: http://carljungdepthpsychology.blogspot.com/ Carl Jung Depth Psychology Facebook Group: https://www.facebook.com/groups/56536297291/10152310616537292/?comment_id=10152310631487292&notif_t=group_comment
Transcript:
Popular Tags: 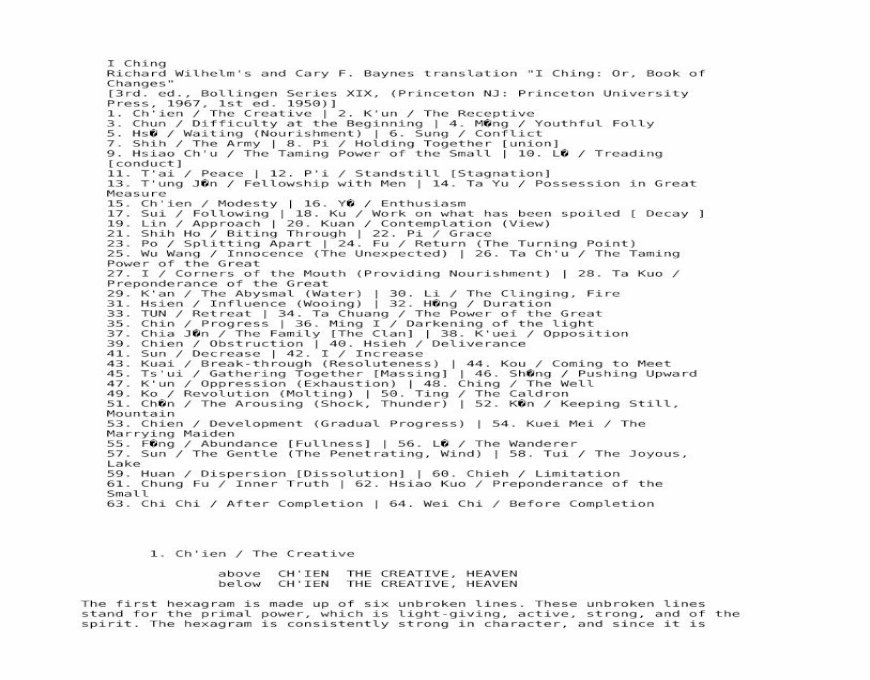 The L. R. I. I Ching - Yi · PDF fileRichard Helmutt did the original translation into German. Legge, ... article On I CHING points Out, Wilhelm says, "...we learn to foresee the future

YiJing (I Ching) - KING DICTIONARY... · PDF fileYiJing (I Ching) Chinese/English Dictionary with Concordance and Translation ... was the one from Richard Wilhelm, which was published

YiJing (I Ching) - World Public · PDF fileYiJing (I Ching) Chinese/English ... was the one from Richard Wilhelm, which was published in 1924. Later, this same translation was translated

I Ching - Foreword by C.G. Jung - Intro to I Ching.pdf · PDF fileI Ching Foreword by Carl Gustav Jung ... Richard Wilhelm. He ... of the I Ching, up to now the only version available

Jung's Affinity for Buddhism: Misunderstandings and ... marion/budismo/jungaffinityforbudismo.pdf the I Ching sent to him by Wilhelm, Evan-Wentz’s compiled and edited trans-lations