Why you should pay top dollar for a killer deal-and other new rules for making acquisitions By Clayton M. Christensen, Richard Alton, Curtis Rising, and Andrew Waldeck The New M&A Playbook

Summary:One plus one makes three: this equation is the special alchemy of a merger or an acquisition. Although they are often uttered in the same breath and used as though they were synonymous, the terms merger and acquisition mean slightly different things. The New M&A Playbook, written by Harvard Business School Professor Clayton Christensen, Andrew Waldeck, who is a partner at Innosight the consulting firm founded by Christensen, Richard Alton, senior researcher at the Forum for Growth and Innovation at Harvard Business School, and Curtis Rising, managing director of Harvard Square Partners, provides a new framework based on business models that enables executives to predict with greater accuracy whether a company on offer is a dream deal or a debacle. The article explores the implications of this framework to better guide executives in selecting, pricing, and integrating acquisitions and thus dramatically increase their success rate. Two companies together are more valuable than two separate companies - at least, that's the reasoning behind M&A. The key principle behind acquiring a company is to boost the companys current performance and also to reinvent the business model and thereby fundamentally redirect the company.

The success or failure of an acquisition lies in the nuts and bolts of integration. The article talks about the how integration can achieve the two goals i.e. improving current performance and reinventing a business model. The article breaks down deals into two fundamental types: leverage my business model (LBM) and reinvent my business model (RBM.) LBM deals acquiring companies to strengthen your business model can boost performance but will rarely change the trajectory of a company because investors anticipate and therefore discount the performance improvements. CEOs are often unrealistic about how much of a boost to expect, pay too much for the acquisition, and face challenges in integrating the businesses appropriately. RBM deals acquiring companies to reinvent a business model are the key to transformative growth. Few executives understand how to identify the best targets, determine the right price to pay and integrate RBM acquisitions in the best way. The article also talk about the general manager first task is to deliver the short term results investors except through the effective operation of the business and second task is to lay the groundwork for long term growth by creating new ways of doing business. So companies turn to LBM acquisitions to improve the output of their profit formulas. A successful LBM acquisition enables the parent either to command higher prices or to reduce costs. Current performance through LBM deals aimed at acquiring new customers. The article also talks about the most effective ways to use RBM an acquisition is as a defense against commoditization. Executives often believe they can achieve extraordinary returns by acquiring another firms resources and so pay far too much. Alternatively, they walk away from potentially transformative deals in the mistaken belief that the acquisition is overpriced, or they destroy the value of a high-growth business model by trying to integrate it into their own.Sounds like a mess--and it has been a mess. But it need not be.

Critical review:In the starting of the article author mention that acquisitions are fall short of expectations because executives incorrectly match candidates to the strategic purpose of the deal. But according to me there are several other reasons which turn into the failure of the acquisitions such as ignorance ,no common vision ,nasty surprises resulting from poor due diligence, poor communication, poor programme management, poor governance ,weak leadership and so on .As a result, companies too often pay the wrong price and integrate the acquisition in the wrong way. The success or failure of an acquisition lies in the nuts and bolts of integration. In one of those cases, a manager's looking to improve the performance of their current business model consists of four interdependent elements .The first is the customer value proposition that helps customers do an important job more effectively, conveniently, or affordably than the alternatives. The second element is the profit formula, made up of a revenue model and a cost structure that specify how the company generates profit and the cash required to sustain operations. The third element is the resourcessuch as employees, products, facilities, and cashcompanies use to deliver the customer value proposition. The fourth is processes such as manufacturing, R&D, budgeting, and sales. So to achieve this two models are used as described in the article are leverage my model and reinvent my model and the reason it was important to call out these two different circumstances is because they actually drive fundamentally different behavior. And so the type of a deal that would target for leverage my model transaction is fundamentally different than what would do in a reinvent my model transaction. In 2003, Apple introduced the iPod with the iTunes store, revolutionizing portable entertainment, creating a new market, and transforming the company. In just three years, the iPod/iTunes combination became a nearly $10 billion product, accounting for almost 50% of Apples revenue. Apples market capitalization catapulted from around $1 billion in early 2003 to over $150 billion by late 2007. Apple did something far smarter than take a good technology and wraps it in a snazzy design. It took a good technology

and wrapped it in a great business model. Apples true innovation was to make downloading digital music easy and convenient. To do that, the company built a groundbreaking business model that combined hardware, software, and service. That model defined value in a new way and provided game-changing convenience to the consumer. A 2005 survey by the Economist Intelligence Unit reported that over 50% of executives believe business model innovation will become even more important for success than product or service innovation as did by Apples manager. This shows how this model help to achieve the market share in the industry. That's different than what you see in leverage my model acquisitions where fundamentally what it have is a company acquiring a set of resources that further strengthen its existing model. This happens mostly in pharmaceutical industry, where the big pharmacy companies acquiring new technologies, new drugs, new therapies that they can then put into their sales force that then maximizes the value of that existing model that they have. Not every management team should be pursuing a reinvent my model type of deal. In many cases, where they should be focusing is on strengthening that core business first before they try to actually transform the existing model that they have.

Here is the example of leveraging my business model. Ranbaxy Laboratories is the most aggressive overseas acquirer from Indian pharmaceutical sector with 11 acquisition deals spread across 10 countries. The company was early to recognize the imperative of TRIPS regime and inadequacy of its process development capabilities accumulated under an inward-looking development strategy. Apart from undertaking necessary reorientation of its in-house research activities to include product development, Ranbaxy has used acquisition as a strategy to simultaneously access new products and new markets. In September 1995, it has acquired Ohm Laboratories with the basic objective of accessing latters advanced manufacturing capabilities and technological processes to create quality branded and generic OTC products.

In April 2000, Ranbaxy Laboratories has acquired Bayer's German generic business portfolio that includes 20 marketed generic products with all their formulations.

The acquisition of the fully automated manufacturing and packaging line facility with state-of-the-art testing and quality assurance capabilities from New York based Signature Pharmaceuticals Inc. in July 2002.

In continuation of its acquisition strategy, Ranbaxy Laboratories entered into an agreement to buy France-based RPG (Aventis) SA along with its fully owned subsidiary, OPIHSARL, in December 2003.

Clearly, the foregoing brief reviews on the experience of selected Indian pharmaceutical companies do indicate that they are using overseas acquisitions to expand their global market presence in addition to getting access to new products, marketing and managerial skills, and quality standards. With this newly gained knowledge they are expected to overcome their existing innovation barrier such as small size of their product portfolio primarily nurtured through process technological activities in the home country.

Conclusions:To be successful, companies must address both financial and social integration issues involved in mergers and acquisitions. Such holistic integration planning should begin early in the M&A process. Instead of putting all personnel development processes on hold, organizations should proactively plan and launch mentoring initiatives that target all critical personnel for retention. Utilizing a web-based approach, organizations can launch both large, self-directed initiatives and smaller, targeted initiatives that enable positive cultural integration, help form strong social networks, and facilitate the sharing of core tacit knowledge across the combined enterprise, all of which are critical factors

in M&A success. In short, instead of a fear-based approach that dictates the cutting or postponement of personnel development processes during an M&A, mentoring should be proactively planned and promoted as a core enabling mechanism to ensure successful integration and increased enterprise value. Companies rightly turn to acquisitions to meet goals they cant achieve internally. But there is no magic in buying company. Companies can make acquisitions that allow them to command higher prices, but only in the same way they could have raised prices all along by improving products that are not yet good enough for the majority of their customers. Similarly they can make acquisitions to cut costs by using excess capacity in their resources and processes to serve new customers but again, only in the same way they could have by finding new customers on their own. And companies can acquire new business models to serve as platforms for transformative growthjust as they could if they developed new business model in house. At the end of the day, the decision to acquire is a question of whether it is faster and more economical to buy something that you could, given enough time and resources, make yourself. For M&As to succeed, three issues need to be addressed proactively in the integration process: 1. Integrating and unifying culture. 2. Building relationships and networks across the enterprise. 3. Transferring tacit knowledge (the critical skills, competencies and understanding necessary for long-term enterprise success). Enhancing profitability because a combination of two or more companies may result in more than average profitability due to cost reduction and efficient utilization of resources. This may happen because of increase in economies of scale, tax advantages, and increases liquidity for owners, gaining access to funds, growth, diversification, synergetic benefits, for the welfare of the company and etc. 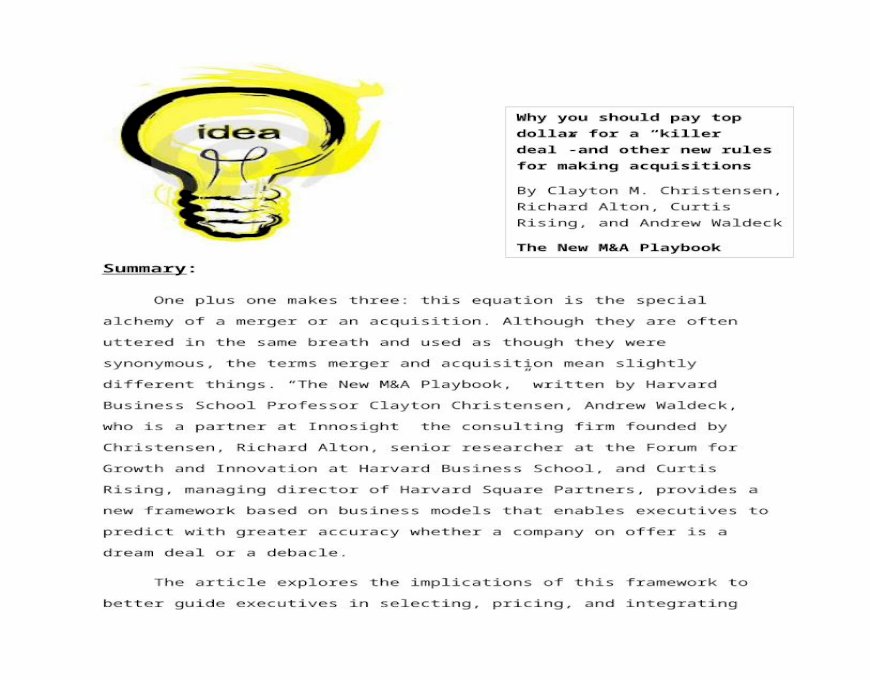