J ohann Strauss is one of those composers - like Chopin or Verdi -who represent their nation. Not that Strauss represented the Austrians in every respect; they would hardly have concurred with the pro-Gypsy senti-ments suffusing Der Zigeunerbaron. They still don't . Last month four gypsies were killed in the Burgenland, scene of

simultaneous lethal attacks on Croat refugees. The climate in which such Neo-Nazi terror burgeons was created by incomplete postwar de-Nazification, which in turn stemmed from the wrongful Allied designation of Austria as 'Hitler's first victim.' It is far too late now to repair these mistakes; one can only hope that F"U membership will wean the Austrians away from their backwoods mentality.

Thoughts on the war's most sombre ar)r)iversary

The Nadir of History

T he commemorations of the 50th anniversary of the liberation of Auschwitz had a twofold significance. Above all they brought - probably for the last time - the unspeak-able sufferings so-called human beings inflicted on members of the same species to the attention of the world. Secondly, the commemorations showed the degree to which the various nations and institutions implicated had over the last 50 years purged them-selves of guilt for their sins of commission or omission.

The following facts are established beyond perad-venture: Auschwitz represented the absolute nadir of human history. At Birkenau SS personnel, driven by the bloodlust of Stone Age man, applied indus-trial methods to mass extermination. Such a wedding of technical efficiency to mindboggling black evil has no historic counterpart - not in the Armenian massacres, nor in Stalin's deportations, or even Pol Pot's atrocities. It is absolutely sui generis as is the ideology that instigated Auschwitz. No document comparable to the 1942 Wannsee Protocol decreeing the destruction of an entire peo-ple has so far been - or ever will be - found in the Sultan's Palace at Istanbul, in the Moscow Kremlin, or in Phnom Penh.

The guilt for Auschwitz has been endlessly de-bated. This is not the place for replicating this debate. Rather let us analyse the readiness with which the implicated nations and institutions have confronted their guilt.

As for the Germans, the government and the Churches, municipalities, newspapers, etc., alike, have been - justifiably - concerned to purge them-selves. The Catholic bishops, in particular, used the Auschwitz anniversary to issue their most explicit condemnation yet of Christian antisemitism. Polish bishops spoke out similarly, though their statement chimes in awkwardly with President Walesa's reluc-tance to acknowledge the very fact of Jewish suffering at Auschwitz. (Oswiecim in Polish popular mythology was a torture chamber for their patriots - not a charnel house for Jews).

So much for the evildoers and the - more or less impassive - bystanders. What about the Russian lib-erators? In his commemorative message President

Yeltsin duly praised them - but, following Soviet precedent, he omitted the very mention of Jews.

Which brings us to another world leader who could not bring himself to mention the word Jew. The German and Polish bishops' disavowal of antisemitism, one notes with dismay, proceeded alongside Vatican moves to canonise the Pacelli Pope, Pius XII. Saint Eugenio Pacelli would make strange company, indeed, for Saint Maximilian Kolbe who volunteered to die in place of another concentration camp inmate.

Let all those who would defend the silent Pope's wartime record on grounds of 'averting a greater evil' recall what happened in 194.3 when Cardinal Galen of Miinster spoke out and denounced Nazi 'mercy' killing from the pulpit. Some of the monks who distributed leaflets with his sermon were caught and executed, while the high-profile prelate remained at liberty - but, most importantly, the eu-thanasia programme stopped. Which indicates that even in the Third Reich (popularly supported) resist-ance was conceivable. Its almost total absence from the German - and the wider non-Jewish - reac-tion to the Holocaust contributed to the nadir of history.n

AJR Self Aid, and SAE to: The Concert Secretary,

The question whether the Israeli-Palestinian Peace Accord had produced a change in their atti-tudes to each other was debated at an Institute of Jewish Affairs symposium.

Jewish Chronicle editor Ned Temko, a former Middle E.ast correspondent, thought no ideological change had oc-curred and that the notion that 'things will never be the same' was a premature illusion. Dr. Ghada Karmi, a Palestinian at the School of Oriental and African Studies, noted an immediate, though su-perficial, change in attitude by Israeli Jews. The Palestinians' initial welcome to the agreements reflected satisfaction at their progress on the road to statehood; disappointment and frustration would, however, lead to anger and resistance.

Dr. E^phraim Karsh, Director of Medi-terranean Studies at King's College, London, thought the agreements had "made a major difference". Israel was now recognised by several Arab countries, including Jordan, Morocco and Tunisia. A "break through" which included the first step towards Palestinian nationhood had been achieved and patience was essential for further progress. Saida Nusseibeh, co-ordinator of Jewish-Arab Dialogue in Europe (JADE), saw a significant accept-ance of change among the Palestinians who were now ready to listen, but much work remained to be done. She envisaged the development of a Benelux type of eco-nomic association between Israel, Jordan and a Palestinian state. Dr. Karsh could, however, foresee limits to economic co-operation; he felt the Palestinian diaspora ought to be harnessing itself to the devel-opment of a state. Pressed on the apparent contradiction between Israel's attitude towards Jewish as opposed to Arab immigration to Israel, Dr. Karsh ar-gued that if and when the Palestinians had a state, they too could enact their own right of return.

RESPITE AND EMERGENCY CARE CARE FOR THE ELDERLY

B orn in Berlin "in the year dot," as she put it, Margot grew up in a pleasant suburb, an only child, but with many friends. Her father was a neurologist and the family's social circle appeared exclusively to consist of doctors. At the early age of eleven, she, too, de-cided to pursue a medical career. She enrolled at the university as a medical stu-dent, but the threatening political situation brought her studies to an abrupt end. Her interest in medicine was, how-ever, undiminished and she began her training as a nurse at Breslau's Jewish hospital.

Tragically, aged only 54, her father died and the political situation worsened, for-cing Margot to leave for England without her mother who was too ill to travel. Soon after war was declared and she was interned with other 'enemy aliens'. Margot acted as a camp nurse, and after release, returned to London to stay in a nurses' hostel. It was at this time that she met and became engaged to Maurice Williams, a philatelist and journalist. They married in Dunstan Road Syna-gogue in 1944 and had a daughter the following year.

A busy social life centred around not only philately, but also her husband's other two loves, cricket and football. When her daughter reached the age of six, Margot returned to nursing training, qualifying as an SRN.

In 1950, with the opening of Otto Schiff House in Netherhall Gardens, Hampstead (later converted to sheltered flats), Margot was appointed to take charge of the admissions. It was essential to speak German; dealing with displaced -and often disturbed - people required con-sideration and humane understanding for their needs. Working from the AJR of-fices, as the other homes were established and added to her portfolio, for 31 years Margot was the Admissions Officer, inter-viewing people in London and other parts of the country to assess their suitability. "Although I had only a part-time job," she recalls, "I was on the go practically every day". At that time potential resi-dents were both fitter and younger than today's applicants, and applications far exceeded places available.

During her years of service Margot formed many valuable friendships. Her husband died in 1976 and, she says, "If I wouldn' t have had my work with the AJR, I would have broken down."

Margot retired officially in 1985, but continued with her work for the homes. She remains 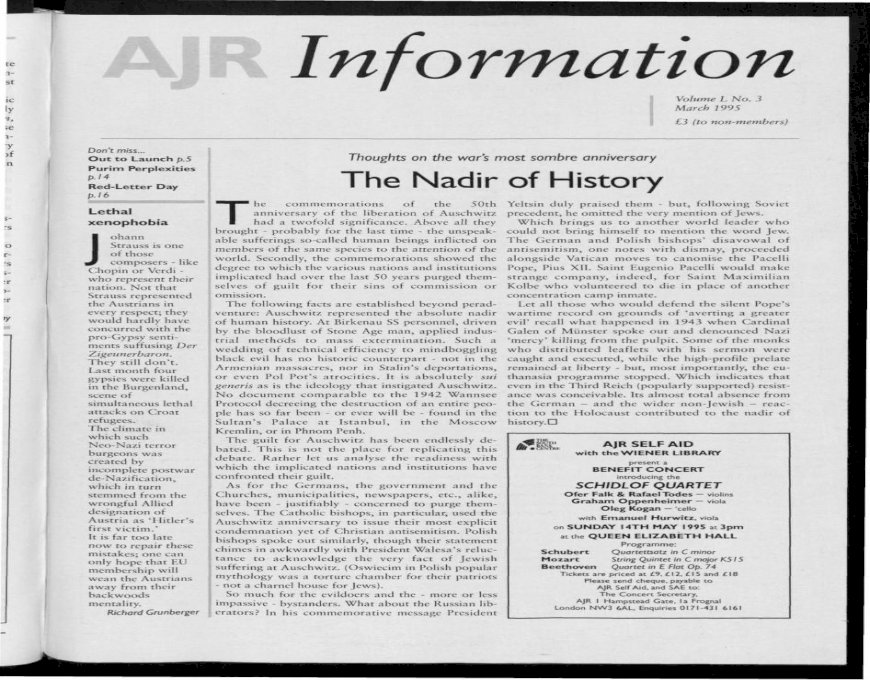 antonio pacelli 2017. 9. 19.آ  Antonio Pacelli incorporated the Hullachan brand 5 years ago and the