Getting a foothold in expanding business of walk toursInterview: John Daly Name: John Ahern Occupation: Director, South West Walks Ireland Background: Co-founded the company 18 years ago. One of the largest walking holiday operators in Ireland catering mainly to the overseas market, offering walks of varying duration and distance, covering Cork and Kerry, the Western Atlantic and Northwest coasts, and Wicklows Garden of Ireland.This figure rises to one in every three among mainland Europeans who display high satisfaction ratings with the quality and price of this activity. Over the past number of years, 200 national looped walks have been developed throughout the country with support from Filte Ireland, the Department of Community, Rural and Gaeltacht affairs and Coillte as well as local groups and landowners. The walks have been developed under a number of themes including nature, island, mountain and coastal and the local communities, who are actively involved in their maintenance, are reaping the benefits of visitor spend in their areas. Holidaymakers who stated that walking was an important factor in their choice of Ireland as a holiday destination spent an estimated 215m here in 2009. I take walking holidays myself in other countries, and I can say without equivocation that the product we have in Ireland is far superior to

JOBOF THE WEEKJob: The Irish Hospice Foundation, which supports the development of hospice and palliative care in Ireland, wants to appoint a chief executive officer. Duties: You will play a key role in the development and implementation of policy relating to all aspects of end-of-life care in Ireland. Qualifications: A graduate, you must have at least five years senior management experience, a good record of advocacy, and a strong empathy for the core vision and values of the Foundation. Applications: Send you CV, quoting reference number 68890 to Brian G Ward, MERC Partners, 12 Richview Office Park, Clonskeagh, Dublin 14, tel: 01-2066700 or email: [email protected]

John Ahern says of the walking industry: This could be a phenomenal tourism sector in Ireland but as of yet hasnt really taken off. Picture:Domnick Walsh/Eye Focus

ith the official start of Spring on February 1, the extra length in the evenings has prompted many to head out once again across trail, bog and hill for rambles in Irelands great outdoors. Continuing to grow in popularity with both natives and tourists, the walking tourism sector has increased as one of the top activities enjoyed by holidaymakers with over 1.6 million taking part during 2009. Research also shows that walking is extremely popular with both domestic holidaymakers, over 860,000, and overseas visitors, up to 800,000, enjoying the wide range of walking facilities around the country during the same period. Plugging into the green gym ethos, the development and enhancement of walking routes across the country has resulted in the steadily rising graph of the sector. The USA, Germany and the Netherlands show the greatest potential for attracting walking visitors, and research indicates that there are potentially more than 1 million British residents who would partake in walking holidays in Ireland over the next three years. This figure is closely followed by 900,000 German visitors, 800,000 from the USA and 700,000 from the Netherlands. At South West Walks Ireland, the varying routes on offer have been planned to give and an insight and understanding of Irelands history, culture and people as well as an introduction to the countrys stunning scenery. The business has grown over the years to become the leader in Irish walking holidays, but still maintaining the personal touch as part of its ethos. The Irish walking industry is a relatively fragmented entity with a substantial number of very small operations, and just a few larger operations like ourselves, says John Ahern. In relation to the competition out there in other countries, we are a still minuscule industry. This could be a phenomenal tourism sector in Ireland but as of yet hasnt really taken off. John Ahern readily admits that 2010 was a tough year for business due in no small way to the effects of the ash cloud last Spring. Because 99.9% of our business is foreign, we took a serious hit and would have been down on turnover by over 20%. Our clients mainly come from Canada and the US, followed by France, the Netherlands and Australia. He cites Canada as showing the biggest potential for walking tourism a vast continent with a high interest in Ireland. We are seeing a strong interest from second or third generation ex-pat Irish who now want to visit the family roots and see some more of Ireland on foot, he says. Research by tourism bodies shows walking is seen by holidaymakers as a premier product, with one in every four mentioning it as an activity they have taken part in during their holiday.

anything on offer in other territories, a product head and shoulders above places like Spain and New Zealand, he says. Visitors are increasingly seeking quality looped walks in areas of outstanding scenic beauty where they can interact with local people while exploring rural areas, and phase four of the national looped walks initiative has two to three loops from the many trailheads to choose from. The walking product made up of the 30 national way marked routes, Coillte forest walks and heritage trails has been further enhanced with the development of these looped walks. The modus operandi of our company is to show visitors the Ireland that we know, including the countryside, the culture and nature, says John Ahern. We want them to taste the best food and accommodation, and, yes, we will be out there walking every day. While there are approximately 10% of walking tourists who will undertake to plan their own vacation agenda, we have found that the vast majority want to be part of a group where age, class distinctions and nationalities dont matter and all gelled together in a convivial atmosphere guided and encouraged by us, their leaders. While some may cringe at the notion of group holidays, our experience at South West Walks Ireland has shown time and again just how much people love interacting and discovering places in a group. The heritage and culture of Ireland which has taken root across most of the globe by numerous generations of emigrants is a resource offering enormous commercial possibilities, Ahern believes. The simple fact is that Ireland has touched practically all corners of the world, even close by Robben Island in South Africa, where Nelson Mandela was imprisoned for so many years, is a little post office called Irish town just a single example of how far and wide the name Ireland has travelled. It is a resource to be developed, we ignore it at our cost, he says. People who come here have a tremendous interest in the country, and I always say to my tours: Every time you put your foot down in Ireland, you put it down on 5,000 years of history. Even our stone walls have a story to tell, he says. Clearly an individual whose enthusiasm for his occupation can bat away the daily threat of inclement weather or steep inclines on the road, John Ahern does concede the successful guide must be part leader, part performer. Without a doubt you need enthusiasm, as you do in any job where you want to make a difference to people. What motivates me is my passion for the beautiful country we live in, the people and our unique culture. These are the things that set us apart from any other place, he concludes. These are the things that make us such a unique and special place to come to. 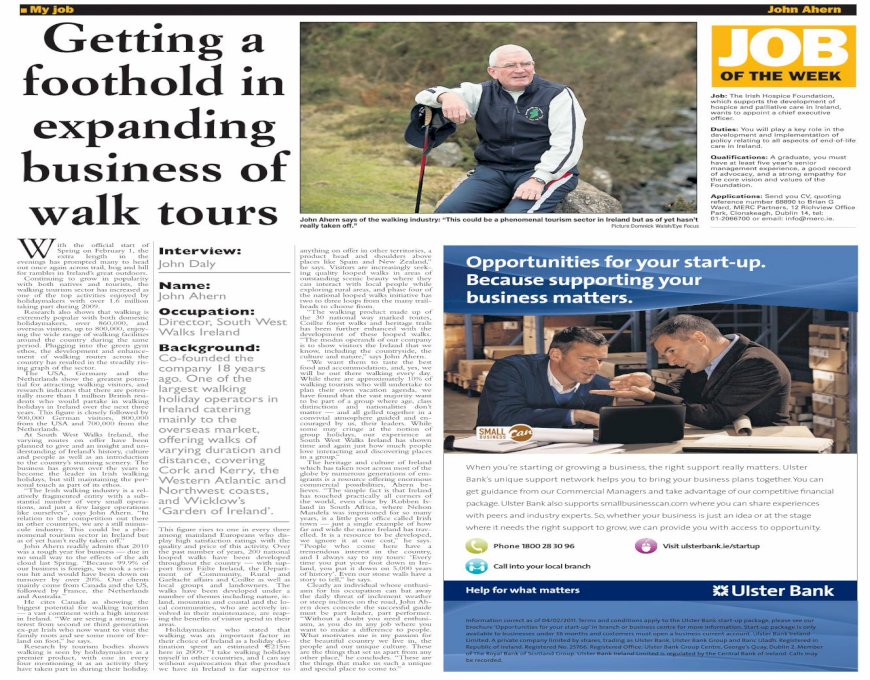 Everything Tom Ahern Has Learned

Response to the Irish Examiner - July 2015