executive summar yThe problems of spam, viruses, phishing and most email denial-of-service attacks can all be traced back to a single common cause lack of authentication in the email protocol sMTP.Table of ConTenTs 1 2 2 3 4 9 10 11 11 12 executive summary Definitions History The authentication Problem sender ID and DomainKeys Identified Mail adoption status Why authenticate? The solution To bounce attacks IronPort systems adoption Recommendations appendix

This lack of authentication means that a receiving mail ser ver cannot reliably verify that a par ticular message is in fact from the sender it purpor ts to be from, making it harder to identify friend from foe. The industr y has recognized this shor tcoming, and a great deal of effor t has been put into developing a new standard that will overlay sMTP and provide the sender authentication that is so desperately needed. This paper will present a brief histor y of how this problem evolved, explore the pluses and minuses of the leading standards proposals, and highlight some recommendations.

Definitions email nomenclature can be a bit confusing, so it is useful to star t with some definitions. an email message has an addressing scheme similar to a postal message: helo/ehlo: The initial contact command between a sending and a receiving mail ser ver, indicating an sMTP conversation. envelope sender: The address of the sending mail ser ver; not exposed to the end-user, used for managing bounces. for example, a commercial email from Citibank may well have an envelope sender from a ser vice provider such as DoubleClick. envelope sender is similar to the return address on a postal envelope. "from:" address: This is a header in the message body that is displayed to the end-user. In many real-world-use cases, a from: address will not match the address of the ser ver that delivered the message. In the postal example, the from: address is similar to the from: address on a formal business letter. sender, reply to, resent sender and resent from headers: additional headers that can be inser ted into a message body as a message and forwarded across the Internet. all are intended to specify the legitimate originator of a message in the event of a retr y or a multi-hop message routing. none can be easily verified without one of the new authentication protocols.

historY Modern email histor y began in 1982 with the creation of RfC 821, simple Mail Transfer Protocol, and RfC 822, standard for the format of aRPa Internet Text Messages. This technology was designed to allow research colleagues at aRPaneT to collaborate across unreliable data links in a totally trusted network. The resulting sMTP email protocol allows any host injecting mail into the mail system to identify itself as any arbitrar y domain name during the sMTP conversation. specifically, a sending mail ser ver can assume the identity of any random sender for all sender attributes, including: Helo/eHlo domain envelope sender from, sender, reply to, resent sender and resent from headers Technical solutions to the authentication problem began in 2003. The current proposal known as sPf Classic grew out of earlier proposals known as RMX (Reverse MX) and DMP (Designated Mailer Protocol) technologies.

envelope sender is also known as MaIl fRoM or return path. 2

Microsofts Caller ID technology merged with sPf to form sender ID in 2004. In parallel, Yahoo! was developing a technology called DomainKeys, and Cisco was developing a similar technology called Internet Identified Mail. The two technologies were merged in July 2005 to form DomainKeys Identified Mail (DKIM). The current Request for Comment (RfC) drafts for sender ID and DKIM have been submitted to the IeTf, but none are yet approved standards. links to these RfCs can be found in appendix a. the authentication ProBlem although the lack of authentication went largely unexploited for 20 years, the last few years have seen massive abuse of this weakness. almost 80 percent of all email is spam, with the vast majority spoofing the senders identity for all sender attributes. spoofing of the senders domain allows phishing email to defraud consumers, damage corporate brands and create bounce-based distributed denial-of-ser vice attacks, and it makes spam more difficult to identify. The email in figure 1 shows a phish email that purpor ts to be from Citibank. The email was actually sent from a compromised host in Taiwan2.

2 The only unspoofable attribute of email technology is the IP address of the message transfer agent (MTa) sending the email (source IP address). IronPor t systems' senderbase (www.senderbase.org) provides reputation, geographic location and other useful information for ever y IP address on the Internet sending email. see senderbase for a repor t on the IP address that sent this Citibank phish. Without sender ID or DKIM, Citibank cannot indicate that this compromised host in Taiwan is not authorized to send on their behalf. 3

The example in figure 2 shows a misdirected bounce resulting from a spoofed envelope sender address.

In this case, a message with a spoofed envelope sender was sent to a recipient at the titan-ten.ro domain. The recipient address at titan-ten.ro was invalid, so the Postfix email program at titan-ten.ro bounced the email to the spoofed envelope sender, [email protected] This technique is widely used to reflect bounces to an unsuspecting target. In this specific example, the original email was the MyTob virus and the bounce message included the actual virus in the attachment email-info.zip. senDer iD anD DomainKeYs iDentifieD mail email authentication allows the recipient to determine whether an email is really from the purpor ted sending domain. Two types of email authentication are primarily used: path-based and cr ypto-based. Sender ID is a path-based authentication technology that authenticates the sending domain, based on the network path the email took. Network path is defined by source IP address. DomainKeys Identified Mail (DKIM) is a cr ypto-based authentication technology that authenticates the sending domain, based on a cr yptographic signature contained within the email. other authentication technologies such as Client sMTP Validation (CsV), bounce address Tag Validation (baTV), MTa Mark and ses are not addressed in this white paper. sender iD sender ID technology allows email senders to associate their domains with allowed network paths (source IP addresses) for their email. a sender who wishes his or her email to be authenticated will publish a list of allowed network paths in the form of a Dns text record. a receiving mail ser ver authenticates an email by extracting the sending domain from the email, quer ying the senders Dns and extracting the allowed network paths (source

IP addresses) from the Dns text record. The receiving mail ser ver then compares the IP address of the last hop sending mail ser ver with these allowed network paths retrieved from the alleged sending domain. email from allowed network paths is authenticated, while email from IP addresses that are not on the allowed network path fails authentication. Currently there are three sender ID record types: sPf1, sPf2.0/mfrom and sPf2.0/pra. The fact that there are three separate and distinct types of sPf records can be a bit confusing, as all three are often referred to as simply sPf records, but they actually ser ve ver y different purposes.

Sender specifies set of valid IP addresses for a domain.

Receiving Mail Server queries owner of the Header From domain to see if IP address is authorized to send mail using this domain.

Appropriate policies are applied based on response 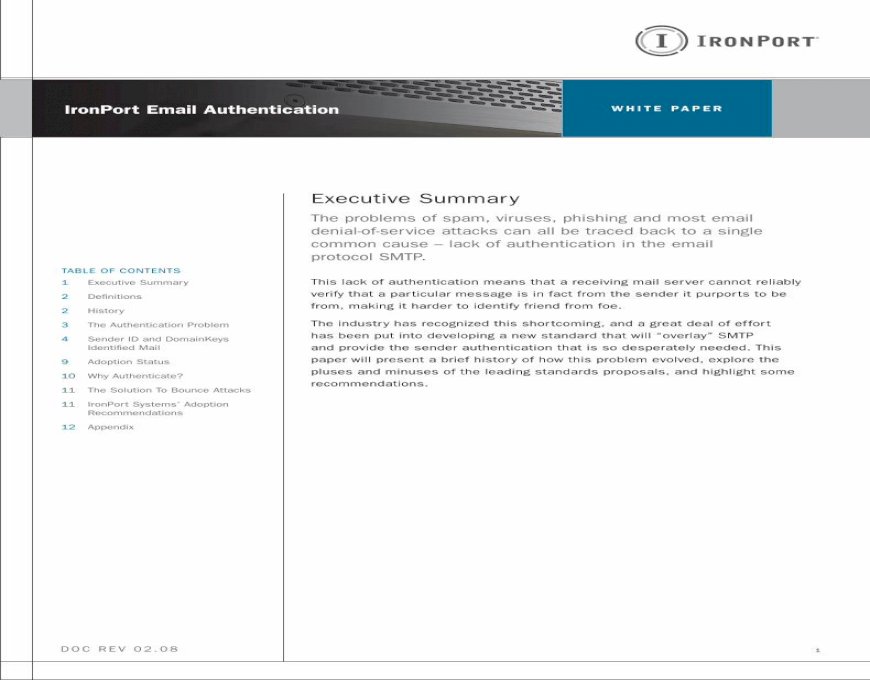