1. Islamic Economy Award 2015, Submissions are now open! Its awards season! The Islamic Economy Award is back, organized by the Dubai Islamic Economy Development Centre and Thomson Reuters to recognize innovative world-class business initiatives and ideas that have contributed to the social and economic welfare of the Muslim population. The award recognizes ideas from across the many areas of the Islamic economy including: Money and Finance Food and Health Media Hospitality and Tourism Waqf and Endowments SME Development Islamic Economy Knowledge Infrastructure Islamic Arts The eight categories correspond to the areas of the Islamic economy, a fast growing market to serve the 1.6 billion Muslims around the world. Past winners have also led the development of healthy, halal, organic food that can not only feed Muslims, but provide a healthy option for anyone who is concerned about the quality of their food. Applications for the 2015 Islamic Economy Awards are now open at https://www.islamiceconomyaward.com/ The Submission Deadline is on the 30th July 2015 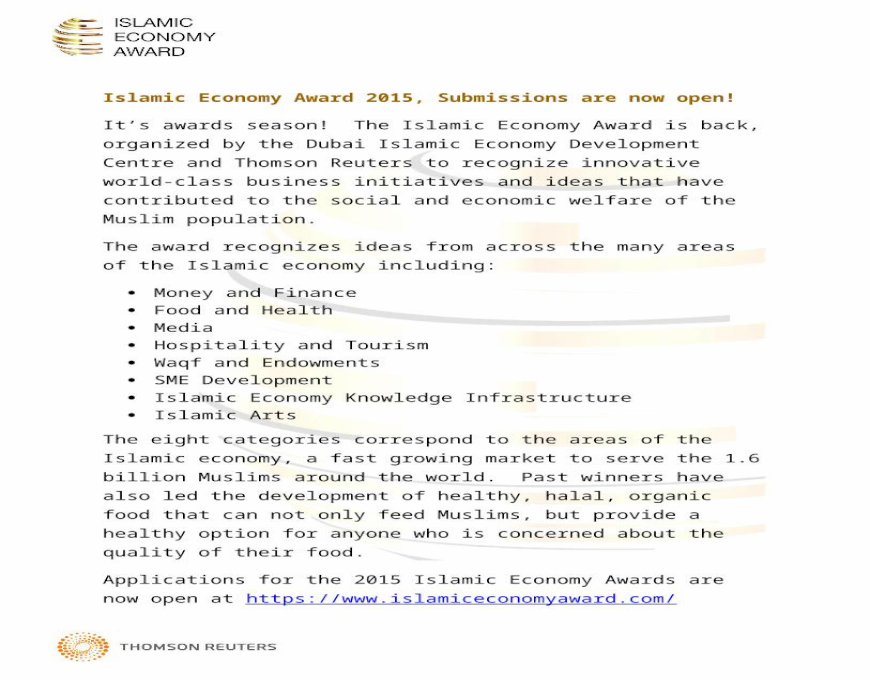 01- Concept of Economy-Islamic vs Secular

Islamic finance in the global economy by Ibrahim Warde

SOME NOTES ON THE POSSIBILITY OF AN ISLAMIC ECONOMY

Entrepreneurship as a means to create islamic economy