AbstractThis work experiments with human motion initiated music generation. Here we present a stand-alone system to tag human motions readily into musical notes. We do this by rst discovering the human skeleton using depth images acquired by infrared range sensors and then exploiting the resultant skeletal tracking. This realtime skeletal tracking is done using the videogame console Microsoft KinectTM for Xbox 360. An agents bodily motion is dened by the spatial and temporal arrangement of his skeletal framework over the episode of the associated move. After extracting the skeleton of a performing agent by interfacing the Kinect with an intermediate computer application, various features dening the agents motion are computed. Features like velocity, acceleration and change in position of the agents body parts is then used to generate musical notes. Finally, as a participating agent performs a set of movements in front of our system, the system generates musical notes that are continually regulated by the dened features describing his motion.

distant ngers of the hand and the torso amounting to 17. Now, with such a wide choice of poses and possibilities the human body is capable of numerous moves and movements. And, as it happens, human beings use their bodily movements more than often as a mode to interact. But interaction needs the participation of more than one agent. Hence since not long before, interactions utilizing human motion were restricted only to human-human interactions. However with the recent developments in technology, the eld of Human Computer Interaction has been exploiting human motion as one of the multimodal interaction possibilities. Human Computer Interaction applications exploiting gesture recognition, full body tracking and motion detection has become a commoner in todays everyday world. Among the recent advances is the launch of the videogame console Kinect TM for Xbox 360 in the late Fall of 2010. In this work of Interactive Music, we have used the technology for skeletal tracking available with the KinectTM videogame console and developed an application to perform tagging of human moves and movements with music. To use the Kinect videogame console for Xbox 360, we had to rst interface it with a computer. For that we have used the OpenNI TM framework [9] and NITE Middleware from PrimeSenseTM [8]. Further we have used the Open Sound Control (OSC) Library to bridge between the Motion Capture Application and the Music Generator Application. The Motion Capture Software performs the Skeletal Tracking using the Kinect, computes a set of features dening the human motion and passes these features as OSC messages to the Music Generator Application. The Music Generator Application which is build with MAX/MSP software then generates musical notes depending upon how the passed features changes over time. Thus, the music created from our system is interactive, real-time and de-

Is there a true perceptual experience of movement when listening to music, or is it merely a metaphorical one owing to associations with physical or human motion? Honing [3] gives an informal yet informative description on how the apparent relation between motion and music has been investigated in a considerable number of works. This article reviews kinematic models that create explicit relation between motion and music which can be tested and validated on real performance data. The key component behind the symbiotic relationship between dance and music is a series of body movements or human motion. In the computer music literature and the sensor system literature, different systems are proposed from time to time [12] to record different context of motion to better understand this relation. There are existing sensor systems that capture various forms of gestures using spatial mapping for building interactive surface like smart walls as proposed by Paradiso et al. [7] or dance oors for tracking dance steps as described by Grifth et al.[2]. Paradiso et al. [6] designed an arrangement of tilted accelerometers and pressure sensors at various positions to capture high-level podiatric gesture and proposes an interface for interactive dance. The goal of their work had been to capture a collection of action-to-sound rules for improvisational dancers. Lee et al. [5] proposed a system to extract rhythmic patterns from movement of a single limb using accelerometers in real-time. Wechsler et al. [11] introduces a camera-based motion sensing system that is essentially an interactive video environment which permits performers to use their movements to control or generate sounds. In our work, we propose an interactive system that uses the depth sensors of KinectTM for a whole body skeletal tracking. It is able to automatically generate musical notes based on the changes in velocity, acceleration and position of a set of skeletal joints in a performing agents body. Figure 1: The KinectTM Game Console.

The recent advances on imaging hardware and computer vision algorithms had led to the emerging technology of markerless motion capture using a camera system. The commercial solution for markerless motion capture currently available in the market is the Microsofts Kinect videogame console. The technology associated with the KinectTM console discovers the 3D skeleton for a human body and gives us a robust tracking output [10]. The Kinect essentially uses a range camera technology developed by PrimeSenseTM that interprets 3D scene information from a continuouslyprojected infrared structured light. The depth sensors in Kinect consist of an infrared laser projector combined with a monochrome CMOS sensor, which captures video data in 3D under any ambient light conditions. After recording the 3D scene information, the Kinect rst evaluates how well each pixel ts certain features for example, is the pixel at the top of the body, or at the bottom? This gives each pixel a certain score. The score for each feature is then combined with a randomized decision forest search. A randomized decision forest search is essentially a collection of decisions that asks whether a pixel with a particular set of features is likely to t a particular body part. The Kinect technology has already been trained on a collection of motion capture data (around 500,000 frames). Once the body parts have been identied, the system then calculates the likely location of the joints within each one to build a 3D skeleton. The Microsoft Xbox runs this algorithm 200 times per second, which is around ten times faster than any previous body-recognition techniques ensur-

ing players can easily be tracked fast enough for their motions to be incorporated in to games.

system that can essentially permit human agents to interact with the application using their motion and create music seamlessly. This system uses the KinectTM and a computer as its hardware components and hence is very portable and inexpensive to use. We present all our software systems at [1]. We also present a work-ow of the nal system that we have used to tag moves with music in Figure 3.

Figure 2: The KinectTM Sensors in Play

The idea of tagging moves with musical notes originated from a preliminary discussion on how the sense of depth can be communicated through the change in musical notes. So, we believed that given a steady ow of information regarding the change of body parts in terms of relative position, velocity and acceleration, it shall be interesting to generate musical notes trying to express a performing agents bodily movements. To enable a robust skeleton tracking we used markarless motion capture system of Kinect and communicated the features dening that motion as OSC messages to the Music Generator System. As mentioned before, to make use of the Kinect videogame console for Xbox 360, we interface it with a computer using the OpenNI TM framework [9] and NITE Middleware from PrimeSenseTM [8]. Now, with the KinectTM console interfaced with the computer using proper interfaces, what was required was to make a bridge between the KinectTM Console and Open Sound Control. This would enable us to actually use bodily movements (in real time) to generate musical signatures. So essentially we could tag certain moves and movements into musical notes. We built a system to make this possible using the OpenNI, the NITE Middleware, the Open Sound Control Library and the Open Frameworks Library. Using all this available frameworks, we built an Interactive Music

When approaching the OSC Skeleton application we wanted a solution that was accessible and interesting. The goal was that each joint should have its own customizable sound source and that the performer and audience should easily be able to discern the sound changing and have a general idea of which sounds are coming from which joints. The entry point of this project is an application called Max/MSP or Max for short. Max is a visual object oriented pr 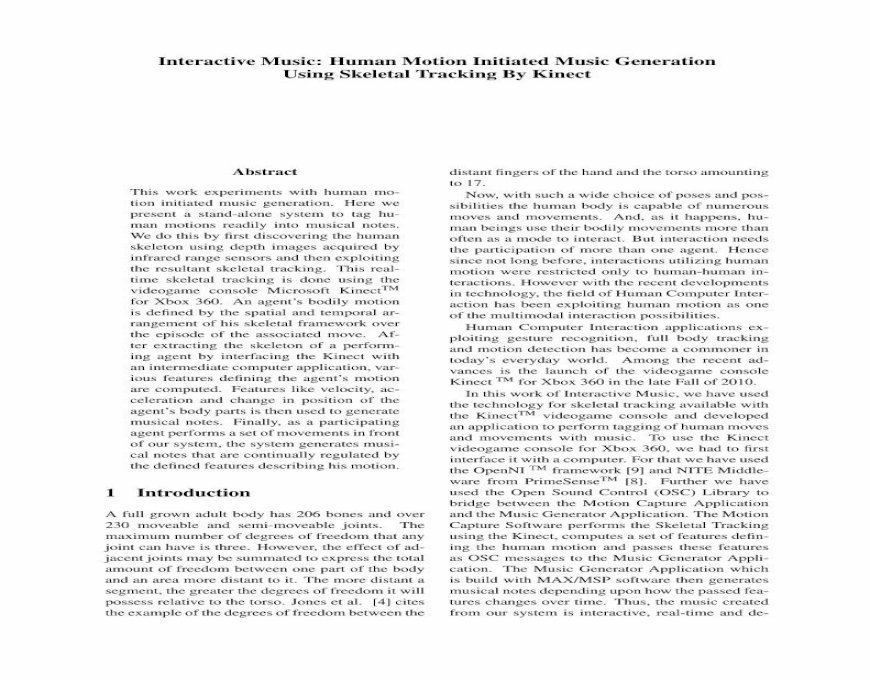