Illumination of the European Krzysztof Penderecki Centre for Music in Luslawice

ProjectsIllumination of the Royal Castle in Warsaw 4

New Illumination of the Klodzko Fortress 8

We are investing in the future 14

Historical monuments are gems on maps of cities, which att ract peoples att ention all over the world, arise inter-est and invite visitors from far away, while for local inhabitants they are something to be proud of. Th ey are magnetic places which att ract tourists att ention, and thus become cultural and social hubs. In Warsaw one the fundamental heritage build-ings which defi nes the historical identity of the city and proves the sovereignty of the Polish state is the Royal Castle.

Originally the Castle was the residence of Mazovian princes, and in the 16th c. it became the seat of the authorities of the First Polish Republic, namely the king and the Sejm (the lower house of the Parliament). From the 19th century the history of the Castle was very turbulent. Aft er the failure of the November Uprising in 1831 it was used e.g. by Russian administration. During the First World War it was the residence of the German Governor Gen-eral. In years 1920-1922 the Castle was the seat of the Chief of State, while in years 1926-1939 it was the residence of the Pres-ident of the Republic of Poland. In 1939 the Castle was burnt down and plundered by the German invader, and in 1944, at the end of World War II, it was almost completely destroyed. It took many years to rebuild it. Th e fi rst att empts to start the process were already made in 1945. However, the meticulous reconstruc-tion started only in 1971 and it was completed in 1988. Today the Royal Castle in Warsaw is included in the National Register of Museums as ahistorical monument and sight of national culture. It is also included in the UNESCO World Heritage List, together with the Old Town of Warsaw.

Th e Royal Castle and the square in front of it together with the characteristic Sigismund III Vasa Column is situated on the most frequently visited tourist walking trail in Warsaw. Almost every visitor who comes to Warsaw ends up seeing the place. Th is is one of the central meetings points in the city. Th e square in front of the Castle is always full of people, during the day as well as in the

evening. Th e western part of the building, located on the square side, is the most broadly known view, appearing in anumber of photographs and post cards. Asimilarly beautiful, though not as commonly seen view is the view of the magnifi cent and extensive eastern elevation of the Castle, exposed to the Vistula River, with the Kubicki Arcades situated at the foot of the Castle and with beautifully restored gardens. Th is eastern view of the Royal Castle is well established in the memory of many Poles due to afamous

painting from the 18th c. presenting Warsaw as seen from the Praga bank of the Vistula River.

However, from the time of reconstruction, this part of the Castle wall did not have much luck as far as repairs are concerned, and that is why in March 2012 its general renovation started. Th e overhaul and maintenance works of the eastern elevation covered repairs of the walls and of plas-terwork, repair and partial replacement of roof work, renovation of corroded metal grates and railings. Th e connection between the original wall, which survived the war and parts of recon-

Illumination of the Royal Castle in Warsaw

painting from the 18th c. presenting Warsaw as seen from the Praga bank of the Vistula River.

this part of the Castle wall did not have much luck as far as repairs are concerned, and that is why in March 2012 its general renovation started. Th e overhaul and maintenance works of the eastern elevation covered repairs of the walls and of plas-terwork, repair and partial replacement of roof work, renovation of corroded metal grates and railings. Th e connection between the original wall, which survived the war and parts of recon-

structed walls was also repaired. Th e elevation was cleaned, all the architectural elements underwent preservation procedures: desalting, reinforcing and replenishment. Architectural details made in stone and in fl oating coat as well as the original sculp-tures crowning the elevation underwent preservative works too. Th e storm water drainage was also replaced and the security and monitoring systems were modernised.

On the occasion of repairing the elevation, its original, histor-ical colour was restored, too. From the time of reconstruction the eastern elevation of the Castle was brick-red, just like the part adja-cent to the Castle Square. Based on the latest research it was dis-covered, that it was not consistent with historical facts. In archival resources Warsaw is described as being of the colour of the Vistula sand and stone. Th at is how the City was presented in the works of afamous Warsaw landscape painter - Bernard Bellott o, known as Canalett o. Examination of these paintings as well as analyses of other iconographic works allowed to restore the original colour of the eastern part of the Royal Castle. Moreover, during overhaul of the Kubicki Arcades some pieces of original plasterwork were found, which also helped in restoration works. Th ese discover-ies allowed to carry out tests on pigments from the paint used to cover the faade of the 18th century. Aft er the overhaul the east-ern elevation gained a bright colour of limestone and sand that the Castle used to have in the Saxon times and in the period of Stanislaw II August.

Th e Royal Castle in aNew LightGems look the most beautiful when illuminated. Th is also

refers to gems of architecture. Th at is why the obvious fi nal step in the renovation works of the eastern elevation of the Royal Castle was the installation of new illumination.

So far the eastern wall of the Castle, from the side of the Vistula, was only illuminated with several high-pressure lamps, which fl ooded the elevation with light only partially. Creating a new modern night-time image of such a historical building as the Royal Castle in Warsaw by use of light was atask of utmost dif-fi culty. Th e partner selected for the undertaking - Philips Lighting - guaranteed the most extensive experience and technical poten-tial. Th e concept of the lighting was designed by Xeno Lighting studio - the author of illumination for the Kubicki Arcades, that the eastern Castle wall is supported on.

New illumination had to provide a harmonious connection between modern technical solutions and the unique nature of the building. One of the basic requirements of the conservation offi cer was to make the faade colour look in artifi cial light as sim-ilar to the daylight colour as possible. Because of this it was neces-sary to use only white light, which does not distort the perception of colours. For this reason and in order to emphasize some archi-tectural elements, it was decided that only white light of various colour temperatures - or simply speaking, of various shades of white - should be used. An obvious requirement when illuminat-ing historical buildings is the least possible interference with the buildings image, which means that the lighting equipment has to be very litt le visible. Th e installation of the Castle illumination also had to be of the highest reliability and having low energy con-sumption.

All these requirements could only be met by the latest gener-ation of light fi tt ings based on LED technology. Th at is why the system of Philips LED eW Graze fi tt ings - equipped with one of the longest-lasting LED light sources on the market, with the aver-age lifetime reaching 50 thousand hours - were selected for illu-mination of the eastern elevation of the Royal Castle in Warsaw. Such characteristics allow to use them as long as up to 10 years. An important advantage of LED technology is also low energy consumption. Due to such an energy-effi cient solution it is pos-sible to reduce the consumption of energy even by 70%. Th e use of 196 LED eW Graze fi tt ings, together with the DynaLite control system, allowed to obtain the best possible lighting parameters, it guaranteed optimized distribution of illumination and proper contrast balance. Th e new illumination emphasizes the represent-ative nature of the building and it creates its architectural depth. At the same time, skilful use of spotlights brings out the character-istic architectural elemen 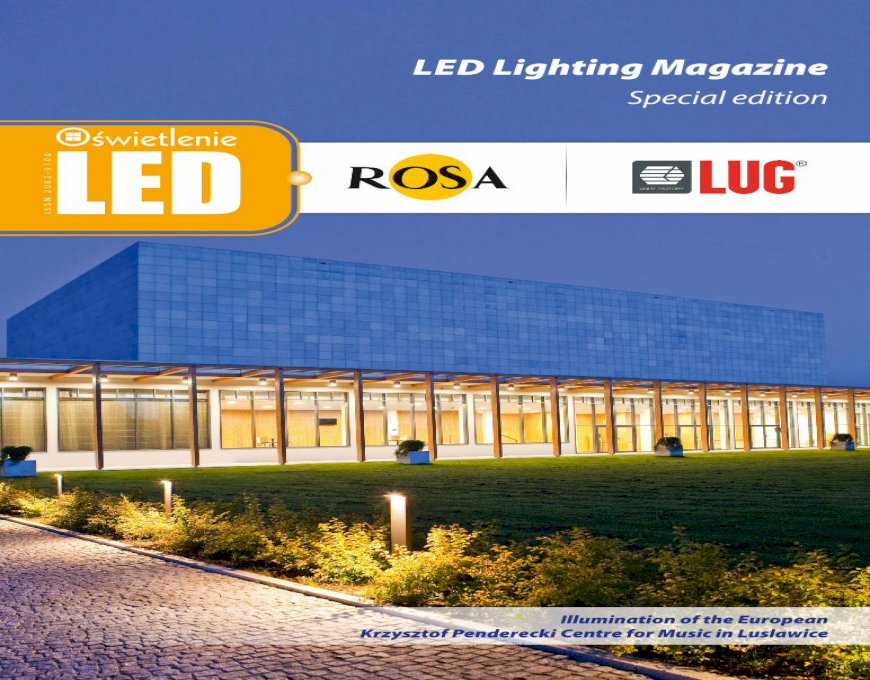