MEASURING SPATIAL EFFECTS IN PARAMETRIC AND

Spatial Inequality in Development Helsinki, 29 May 2003

Measuring Spatial Effects in Parametric and

Nonparametric Modelling of Regional Growth and

Testing regional convergence hypothesis involves important data issues. In empirical circumstances the problem arises of finding the best data to test the theory and the best estimators for the associated modelling. In the literature usually little attention is given to the level of spatial aggregation used and to the treatment of the spatial dependence and spatial heterogeneity. In this paper, we present an empirical study of per capita income convergence in Italy based on a fine level of aggregation (the NUTS-3 EU regions represented by the 92 Italian provinces). Concerning the statistical methodology, we compare two different approaches to measure the effects of spatial heterogeneity and spatial dependence. Our results confirm the convergence club hypothesis and suggest that spillover and convergence clubs are spatially concentrated.

countries and regions within a country grow faster than others. Economic theory has

productivity of capital. However, many empirical studies show contrasting, less

Apart from the evident interest in the subject at a World scale, regional

issues raised in Europe by the unification process. Since large differentials in per capita

and monetary union, the narrowing of regional disparities is indeed regarded as a

fundamental objective for the European Union policy. Hence, the problem of testing

as a fundamental one in the view of policy evaluation.

Surprisingly enough, the literature on the empirical measurement of spatial

convergence has not moved at the same speed with the increased demand. Indeed, most

measures in which the geographical characteristics of data play no role. For instance, in

to different results in the modelling estimation phase (Arbia, 1988). Secondly, it is well

presence of spatial similarities among neighbouring regions (Anselin, 1988; Anselin and

Bera, 1998). As a consequence, the standard estimation procedures employed in many

estimates of the convergence rate.

In this paper, we present an empirical study of the long-run convergence of per

spatial effects (like spatial regimes and regional spill-overs) to be properly modelled.

The empirical analysis is divided into parts. In the first one, we use traditional

is concerned, a non-parametric local regression model is firstly applied to identify non-

linearities (i.e. multiple regimes) in the relationship between growth rates and initial

conditions. Then, by using information on the presence of spatial regimes, we apply

part, we exploit the alternative kernel density approach (based on the concept of intra-

The layout of the paper is the following. In Section 2, we present a review of spatial

within the contest of a -convergence modelling. In Section 3, we report the results of

specifications for spatial effects. In Section 4, we discuss some possibility of including

based on the same data set. Finally, in Section 5 we discuss the results obtained and

The most popular approaches in the quantitative measurement of convergence are

those based on the concepts of - and -convergence (Durlauf and Quah, 1999 for a

The -convergence approach consists on computing the standard deviation of

regional per capita incomes and on analysing its long-term trend. If there is a decreasing

trend, then regions appear to converge to a common income level. Such an approach

permutations and, thus, it does not allow to discriminate between very different

geographical situations (Arbia, 2001).1 Furthermore, as argued by Rey and Montoury

(1998), -convergence analysis may mask nontrivial geographical patterns that may

also fluctuate over time (p. 7-8). Therefore, it is useful to analyse the geographical

dispersion. This can be done, for instance, by looking at the pattern of spatial

autocorrelation based on the Morans I statistics (Cliff and Ord, 1973).

So far, the -convergence approach has been considered as one of the most

convincing under the economic theory point of view. It also appears very appealing

under the policy making point of view, since it quantifies the important concept of the

speed of convergence. It moves from the neoclassical Solow-Swan exogenous growth

function based on decreasing productivity of capital and constant returns to scale. On

1 Consider two regions each dominating the extreme end of an income scale. Now let there be mobility along the income scale. For the sake of argument, say each ended up at the exact position formerly occupied by its counterpart. According to the concept of convergence, nothing has changed. In reality the poor has caught up with the rich while the rich has slide down to the position of the poor. 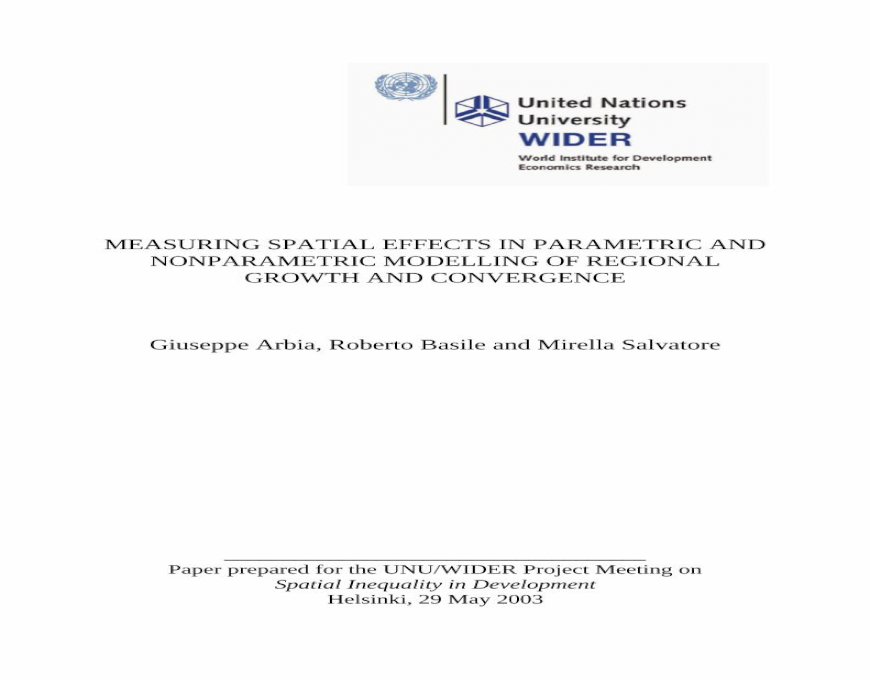