DownloadReport this document
Share this document with a friend
Description:
NEUROENDOCRINE TUMORS. Dr.vahedian ardakani Medical oncologist 91/11/5 . Neuroendocrine tumors (NETs) are derived from the diffuse neuroendocrine system, which is made up of peptide- and amine-producing cells with different hormonal profiles depending on their site of origin . - PowerPoint PPT Presentation
Transcript:

Dr.vahedian ardakaniMedical oncologist91/11/5 Neuroendocrine tumors (NETs) are derived from the diffuse neuroendocrine system, which is made up of peptide- and amine-producing cells with different hormonal profiles depending on their site of origin. Pathologists cannot differentiate benign from malignant carcinoid tumors based on histologic analysis, nor can they histologically differentiate pancreatic endocrine tumors from carcinoidtumors. Malignancy can only be determined by localinvasion or distant metastases.

Neuroendocrine tumors of the lung encompass a spectrum of tumors, including low-grade typical carcinoid, Intermediategrade atypical carcinoid, high-grade large cell neuroendocrinecarcinoma (LCNEC), and SCLCCarcinoid tumors are rare, but are the most common gastrointestinal neuroendocrine tumorCarcinoids arise from enterochromaffin cells of the gastrointestinal tract. They have traditionally been classified based upon their origin from the embryonic divisions of the alimentary tract; the foregut, midgut, or hindgut. In addition, they are classified based upon histologic characteristics as "typical" or "atypical" (anaplastic). the majority of carcinoids were located in the gastrointestinal tract (55 percent) and bronchopulmonary system (30 percent)

Within the gastrointestinal tract, most carcinoids arose in the small intestine (45 percent, most commonly in the ileum), followed by rectum (20 percent), appendix (16 percent), colon (11 percent), and stomach (7 percent).

The distinction between benign and malignant carcinoid is based upon the presence or absence of metastases rather than histology alone. The metastatic potential of carcinoids correlates best with the size and the site of the primary tumor. .Clinical symptoms may be general, or they may correlate with the location of the tumor and be organ related.Symptoms of the carcinoid syndrome (eg, flushing and diarrhea) are infrequent, occurring in approximately 5 to 7 percent of patients. The frequency of carcinoid syndrome varies with tumor site and presence of metastases. Among patients with intestinal carcinoid tumors, the carcinoid syndrome does not occur in the absence of liver metastases.

Gastric carcinoids may present with peptic ulcer disease, abdominal pain, or bleeding. Gastric tumors are subclassified into types that have different presentations and malignant potential

Appendiceal carcinoids are the most common neoplasm found in the appendix; they are most often discovered incidentallyTransverse, descending colon, and rectum tumors may present with changes in bowel habit, obstruction, or bleeding. .

The clinical value of SRS in the initial evaluation or routine follow up of patients with advanced NET has been called into question. Baseline SRS may still be useful, however, as the uptake of radiolabeled octreotideis predictive of a clinical response to therapy with somatostatin analogs

The predominant site of metastatic spread is the liver. Patients in whom metastatic disease is suspected should be evaluated with a triple-phase contrast-enhanced helical CT or an MRI scan to rule out liver metastases. Some physicians prefer MRI because of its greater sensitivity for liver metastases.Changes in biochemical markers are associated with disease progression and/or response to treatment. Elevated urinary levels of 5-hydroxyindoleacetic acid (5-HIAA) are highly specific for serotonin-producing carcinoid tumors (ie, those arising in the midgut), although they are not sensitive. For non-serotonin producing carcinoids and pancreatic neuroendocrine tumors, serum chromogranin A (CGA) is a more sensitive than 5-HIAA, though serum levels of CGA can also be elevated in non-neuroendocrine related conditions. Pancreatic neuroendocrine tumors (pNETs) are low- tointermediate-grade neoplasms that are thought to arise from the pancreatic islets. Also known as pancreatic endocrine tumors,islet cell carcinoma, or pancreatic carcinoid, pNETs account for a minority of pancreatic neoplasms and can be either functional or nonfunctional.STAGING SYSTEMS FOR PANCREATICNEUROENDOCRINE TUMORS 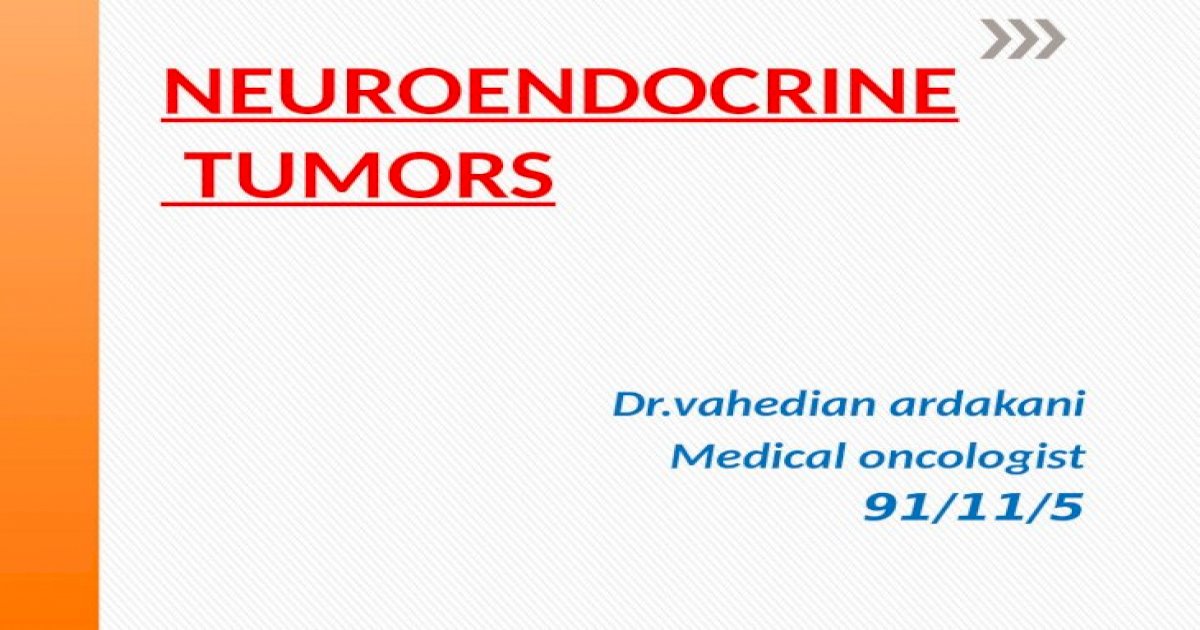 Diagnosis and treatment of neuroendocrine tumors

Current Management of Pancreatic Neuroendocrine Tumors ... · PDF file and the detection of tumors

Neuroendocrine tumors of the pancreas