2. Our Research has two thrusts1) Contribute to the science of human interaction and intersubjectivity 2) Develop novel technical capabilities for computers to detect and infer the states of intersubjectivity based on video and audio data2 3. The Problem Parties who know or suspect that others might observe them via surveillance systems will try to communicate in a covert manner using non-explicit references and non-verbal communication (gesture, expression, and other body language) to reach shared understanding. Video contains rich visual cues that can enable the decoding of the non-explicit communication that audio alone does not, some of which can be interpreted by a third-party human observer (e.g., an intelligence analyst). The exponential growth of video and audio data will lead to a problem of scale for human intelligence analysts, as the volume of data that is continuously generated will overwhelm them. Automated techniques are needed to supplement and ultimately reduce the amount of human analysis needed. 3 4. Discovering the architecture of People display their understanding in interaction in a well- documented three intersubjectivity- turn sequence 1. 2.Initiation Response 3. Confirmation/correction We study verbal and non-verbal cues4 5. Solution/Approach Identify the structure and sequence Create models to of implicit reference (allusion), develop algorithms understanding, agreement andthat detect and infer sentiment between meeting parties the state of these as it evolves over time.behaviors. Culture as we know it is an apparatus for generating recognizable actions (Sacks, 1992;) By recognizable, we mean, can be readily seen and recognized by any member of the culture. we concern ourselves here with four types: 1. Confirming implicit allusion implicit references, not explicitly stated i.e., confirming,through various recognizable vocal actions, both the content and the implicit conveyanceof a participants prior remarks 2. Understanding - The architecture of intersubjectivity in which understanding is achievedor navigated in three turn sequences 3. Agreement - The structure of Agreement and Disagreement Sequences: a. Negotiationand confirmation of mutual agreement; If disagreement, persuasion 4. Sentiment - emotional significance of expression as distinguished from its verbalcontext - a. Positive/negative detection; b. Reaction to detected sentiment 5 6. Solution/Approach Analyze videotapes of: Naturally occurring, mundane face-to- face conversation to determine if and when the accompanying interactional gestures are systematic and can serve as cues that can be automatically detected. More formal environments -- planning meetings, in which all parties must achieve understanding and agreement regarding a listing of subtasks and estimates for completing them. Based on the analyzed video and audio data, existing methods in body tracking, gesture detection, and audio analysis will be used to extract machine perceivable cues.6 7. Why Now? Most of this formal analytic study has been derived from telephone conversation data, Video analysis can leverage the communicative intent of gestures in conversation. The development of models and algorithms for the detection of human action would benefit significantly from the analysis of the ways in which gesture are systematically related to these observable and recognizable social actions. Recent advances in the analysis of embodied conduct suggest that it may be possible to detect social action that embodies intent but is not explicitly said by participants. the occurrence of head nods, eyes gaze, body position can indicateacceptance, agreement, disagreement, engagement or disengagementwith an ongoing course of conversation. analysis tools can provide assistance proactively to enable a new kind ofanalytic process, one in which the system itself finds relevant instancesthat the analyst herself may not have time or intuition to identify.7 8. PARC CONFIDENTIAL 8 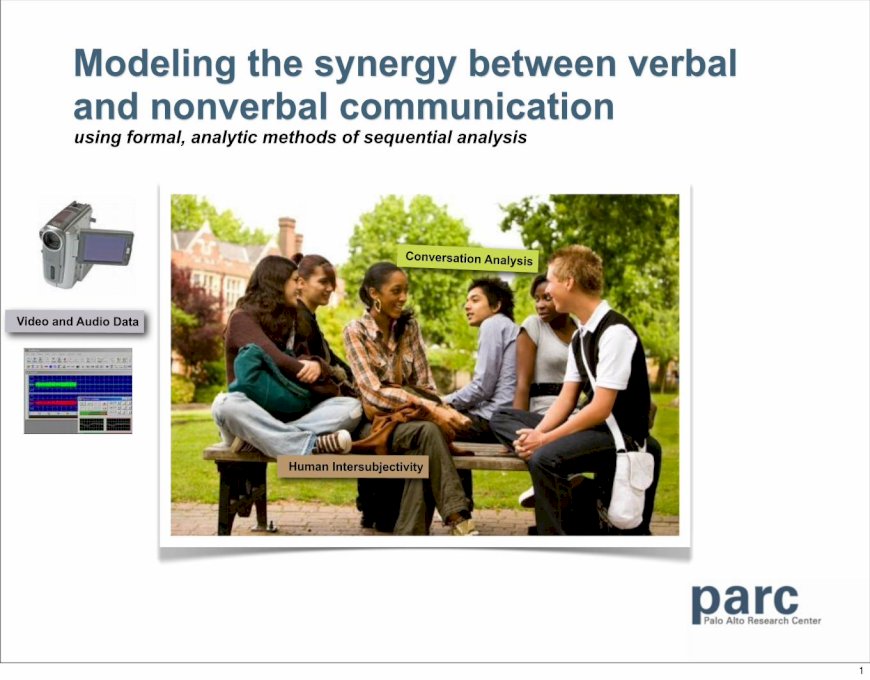