Parenthetical is defined as: enclosed in parenthesis (1b 1641)

Citation is defined as: the act of citing verbatim the spoken, written, or printed words of another (2a 411)Parenthetic Citation VS. QuotationWhile both parenthetic citations and quotations follow the same basic procedure, they are not exactly the same concept.Quotations are the exact (near exact) words used in a work . Parenthetic Citations are use of the authors idea or line-of-thought rather than their exact words.It is important to note that if the information used within your text is not your original thought or common knowledge, you MUST use either form to document how you derived your thought pathway.6.1 Parenthetical Documentation and the List of Works CitedIn order to be in compliance with MLA guidelines, the following items are needed to avoid plagiarism:A works cited page that is used to document all sources used.The use of parenthetical citation that indicates the specific information and its placement within the document from the work used.The use of notes with parenthetical citations that allows the writer to provide more information (e.g., additional comments, explanations, etc.) and and/or additional bibliographical information. 6.2 Information Required In Parenthetical DocumentationThe reference contained within the written text should refer to a precise source (e.g., authors name. etc.) contained in the works cited list.Based on the parenthetical citation used, the source used should not be ambiguous.Distinction between similar authors last name and/or multiple texts by the same author will be covered in the subsequent slides. 6.2 Information Required In Parenthetical DocumentationThe location of the information referenced must be clearly and concisely identified.Reference makers must include a page, paragraph, or volume number.Works cited in their entirety, (e.g., radio, television programs, etc.) will usually be cited by their title only.6.3 READABILITYBecause the use of parenthetic citations are necessary to support the writers premise, their use is necessary to avoid the borrowing of another authors thought and/or research. However, readability tends to suffer and a persons work may read in an awkward fashion. Therefore, these references should be kept brief and concise and should be placed in natural breaks or pauses. 6.3 Readability of Parenthetic Citations (contd)Typically those are found at the end of sentences, phrases, and/or clauses after the excised information has been utilized.The placement of the original authors name within the context of the reference sentence is an appropriate means to prevent the stilted nature of many research papers references.The use of this technique will also aid in subsequent usage of the reference later in the paper.

6.4 Samples of & Using Parenthetical CitationsBased on the MLA Handbook, 7th edition, we will take a look at the following examples:6.4.1 Citing Entire Works or Works Without Page Numbers6.4.2 Citing Parts of Works6.4.3 Citing Volume & Page Nos. of Multi-Volume Work6.4.4 Citing a Work Listed by Title6.4.5 Citing a Work by Corporate Author6.4.6 Citing Two or More Works by the Same Author(s)6.4.7 Citing indirect Sources6.4.8 Citing Common Literature6.4.9 Citing More Than One Work in a Single Parenthetical Reference

6.4.1 Citing an Entire Work, Including a Work with No Page NumbersUse the following format for citing an entire work.This is used to cite information in general terms, rather than specific information.Can be used for any sources (print & non-print), particularly those that do not have page numbers or other location markers. Best practice suggests that the authors name be included in the written text rather than an actual parenthetic citation.

6.4.2 Citing Part of a WorkWhen using part of anothers work, please remember there are two conditions that must evaluated.

It is suggested that every first-use reference include that authors name within the text as it was done for 6.4.1.6.4.2 Citing Part of a WorkAlways be sure that the pages, sections, etc. are contained within a set of parenthesis at the end of the information before the period ending the sentence.

6.4.2 Citing Part of a Work Authors name within the textSources with pagination(page #) DO NOT use p. or pp.Sources without paginationParagraphs used primarily for internet sources(par. or pars. #)Sections used from handbooks, etc.(sec. or secs. #)Preface from beginning of books or other works(use Roman Numeral found on page)Appendices, table, figures, etc.(see fig. #), (see table #), etc.

6.4.2 Citing Part of a Work Authors name within the textSources with pagination(Authors Last Name page #) DO NOT use p. or pp. and no comma!Sources without paginationParagraphs used primarily for internet sources(Authors Last Name par. or pars. #)Sections used from handbooks, etc.(Authors Last Name sec. or secs. #)Preface from beginning of books or other works(Authors Last Name use Roman Numeral found on page)Appendices, table, figures, etc.(Authors Last Name see fig. #), (Authors Last Name see table #), etc.6.4.3 Citing Volume and Page Numbers of a Multivolume WorkWithin the citation for the volume number, be sure to provide a page reference & separate the two (vol. no. & page no.) by a colon and space.Ex. 1 (Finkelman 1: 338-355) When used at the end of a passage.Ex. 2 When used with author/editor referenced within the context of the written passage use the following at the end of the sentence. (1: 338-355)Be sure to NOT include the words volume & page or their abbreviations when using this form.6.4.3 Citing Volume and Page Numbers of a Multivolume WorkWhen citing a volume in its entirety, use the authors last name and volume no. Please see example and note the differences from previous slide!Ex. 1 (Finkelman, vol. 1)

6.4.4 Citing a Work Listed by TitleAs a general rule, parenthetic references cited within the context of a paper does allow for some abbreviations of the titles. However, problems can arise in the following areas:Improper title abbreviations that do not reflect an actual source (e.g., using Computer as a title for The Encyclopedia of Computer Science and Technology.)Similar citations for the same word/topic is cited and each must have quantitative qualities that distinguish each entry. (e.g., ENIAC Encyc. Of Computer Science vs. ENIAC Supercomputers)A simple way to avoid confusion is to use the full title within the context of the paper to avoid any confusion of an abbreviation of the title.6.4.5 Citing a Work by a Corporate AuthorAs with all longer citations, it is acceptable to use the full/corporate author within a parenthetic citations at the end of a sentence.A better practice is to use the corporate authors name within the context of the sentence to avoid a cumbersome stop at the end of the sentence.This practice can ease the abbreviated name for further citations. (see 6.4.4)6.4.6 Citing Two or More Works by the Same Author or AuthorsWhen using this form of citation, place a comma after the authors last name and add the title of each work (or an appropriate abbreviation after the first full use) with the relevant page number.Ex. (Nardo Roman Republic, 67-76) (Nardo Roman Empire, 42-43)If the author and work are cited within the context of the paper, cite only the relevant page numbers.Ex. In Nardo Roman Republic (67-76).

6.4.7 Citing Indirect SourcesAlthough the taking of materials excised from another's work is allowed, this practice is highly discouraged.Use the following procedure if it is not possible to use an original source.Include the abbreviation qtd. in before the authors last name and page number.Ex. Emerson declared that poetry and the poet himself unlocks our chains, and admits us to a new scene (qtd. in Kane, 359) 6.4.8 Citing Common LiteratureCommon literature is defined as the works that are frequently studied, and often these sources are drawn from multiple editions of the same work. Typical examples of these sources include:Works of ShakespeareVarious editions of the Bible or other scriptural textsOther common forms of literature6.4.8 Citing Common Literature (contd)In order to alleviate citation and access problems when a specific edition may or may not be readily found, use the following procedure to cite these types of works.

For commonly studied verse, plays, and poems:Omit page numbersCite by divisions &Act, scene, book, part, etc.Cite by lineUse periods that separate the numbers usedEx. 1 (Macbeth 4.1.120) Refers to Shakespeares Macbeth Act 4, Scene 1, Line 1206.4.8 Citing Common LiteratureDos & DontsDO NOT use l. or ll. when citing lines only as they may be confused with numerals. If one is citing only specific lines from a work, use the word line or lines in the first citation and numbers thereafter.Unless specified by the instructor, DO use Arabic numbers for separating the divisions (acts, scenes) and page numbers.6.4.8 Citing Common LiteratureFor citing scripture:Include an edition in the bibliographic citation andBe sure to include the title of the specific edition used with the first parenthetic citation.Always name the book used, the chapter, and verse rather than use any page numbers.Abbreviations of the chapter titles are acceptable.

Example: NIV Archaeological Study Bible, Ezra 7.1-106.4.9 Citing More Than One Work in a Single Parenthetical ReferenceBecause related information within a parenthetical citation may be excised from multiple sources, the write is allowed to use the following procedure:Multiple source citations must be set apart by a semicolon.Caution should be used with this method as a long parenthetic citation may be a distraction to the reader and its content.Please see 6.5 on a better way to perform this procedure.6.5 Using Notes With Parenthetical DocumentationAccording to the MLA Handbook 7th Edition (2009), there are only two (2) types of notes to be used within a paper.Content Notes that provide the reader with:Comments,Explanation, orInformation not found within the written text (e.g., further explanations and/or particular word meanings)Bibliographic Notes that contain multiple sources (from 6.4.9) or to evaluate comments of the given source.6.5.1 Content NotesUse this detail to provide a means through which a writer may elaborate on a topic without distracting the reader by an indirect source or explanation as to why this secondary source was used. (230-231)When using this device, be sure to use a superscript number to reference this note.Then be sure that this note will appear at the bottom of the page with a 1 in. insert.

use of parenthetic citations 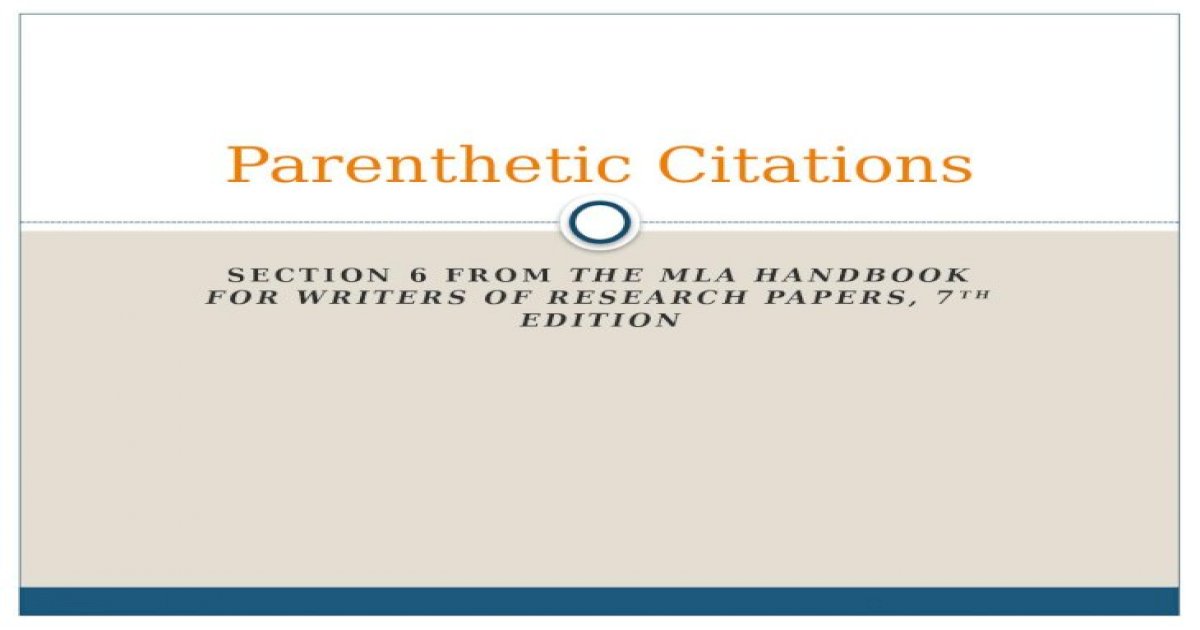 Citations: what, when, how and why!!. What are citations for?

Quality Weighted Citations Versus Total Citations in the ... · PDF file excludes journal self citations. Other RAMs based on citations data that exclude self journal citations include