DownloadReport this document
Share this document with a friend
Transcript:
091104 History.inddPHALEN - KELLER REGIONAL PARK MASTER PLANRAMSEY COUNTY PARKS AND RECREATION
ARLINGTON AVE.
3a
3b
DRIVE
PARKWAY
4a. Canoe Dock In the early 1900’s, a dredge created an island and a stream running around it out of an area that was formerly a marsh. Then, in 1913 a 500 foot long canoe dock was erected on the shores of the lagoon. This area was a popular location for paddling canoes and listening to music played on portable phonographs. In 1926, the canoe dock was rebuilt on the shores of Lake Phalen.
5. Tobaggan Chute From 1921 to 1924, a toboggan chute was built on the west side of the lake near the current Lakeside Center. This wooden structure started at the top of the hill and ended near the edge of the current golf course. This structure burned in 1935 when the lakeside canoe dock caught fi re.
6. Launch Dock A steam-powered excursion launch carried passengers dressed in the Sunday-best, through the Phalen chain of lakes from 1906 through 1914. From 1925 through the 1930’s, a gasoline- powered launch was used for similar cruises.
7. Pavilion The fi rst pavilion was built in 1903 on the western shore of the lake. That pavilion was replaced in 1923. The current pavilion was built in 1975 just south of the island.
8. Bandstand The fi rst bandstand was built in 1912 neart the pavilion. Concerts and community events continued to be summertime favorites for many years, and in 1923 a new bandstand was constructed with the pavilion.
9. Waterfall Water levels in the 1950’s were low. A well was dug in 1960 by Ramsey County to restore the water level of the lake. The water cascaded over a stone ledge into a pool before fl owing to the lake.
10. 1986 Ice Palace In 1986, an ice palace was constructed to commemorate the 100th year of the celebration of the Saint Paul Winter Carnival. The palace stood on the island at a height of 129 feet.
11. Streetcar Station In 1903, an electric streetcar made it possible for someone to access Lake Phalen from anywhere in Saint Paul. From 1904 through 1910, a miniature railroad carried passengers from the streetcar station to an amusement park on the island.
12. Phalen Creek In the early 1800’s, Native Americans and fur traders camped near the banks of a creek at the south end of Lake Phalen to hunt waterfowl and other game. In 1869, a water supply plant was constructed to carry this water to downtown Saint Paul and homes near the Mississippi River. Phalen Creek has been placed subterraneously for the majority of its route from Lake Phalen to the Mississippi River. Recently, a short section of the creek has been raised to the surface in Swede Hollow and Bruce Vento Regional park.
13. Kelly’s Pavilion In the 1920’s, Edward Kelly (owner and operator of the adjacent St. Paul Tourist Camp) set up a pavilion on the north side of the lake. The pavilion was a popular location for picnickers to pitch horseshoes or relax in the shade of the screened verandas. The pavilion’s refreshment counter was very popular on summer evenings with the sale of Vander Bie’s ice cream.
14. Meditation In 2006, Lei Yixin, prominant Chinese sculptor, created ‘Meditation’ as part of Minnesota Rocks!, an International Stone Sculpture symposium. The sculpture is located on the south shore of the lagoon. The sculpture was horifi cally defaced in July 2008 with racial slurs and hate language. The public support denouncing this activity has illustrated the power of a community-wide voice condemning racial hatred and ignorance.
15. Dragon Boat Festival Since 2003, a Dragon Festival has been held at Phalen Regional Park which showcases the heritage of Asian Pacifi c communities. The festival includes music, dancing, food, crafts, and martial arts demonstrations. The highlight of the festival is the dragon boat races held on Lake Phalen. Teams of 20 people race 40-ft long boats to the beat of a drum toward a fl ag at the fi nish line. The paddling event provides quite a sight for spectators and a team-building exercise for participants.
1. Keller Lake Named after Herbert P. Keller, Mayor of Saint Paul from 1910-1914. He was fi rst mayor to be born in the City of Saint Paul
2. MN Highway 61 This is the original route of Highway 61 through Keller Park built in 1921 to connect Saint Paul to White Bear Lake. The highway was realigned to its current location in 1952.
3a. Beach In 1903, The fi rst beach was located along the east shore of Lake Phalen. 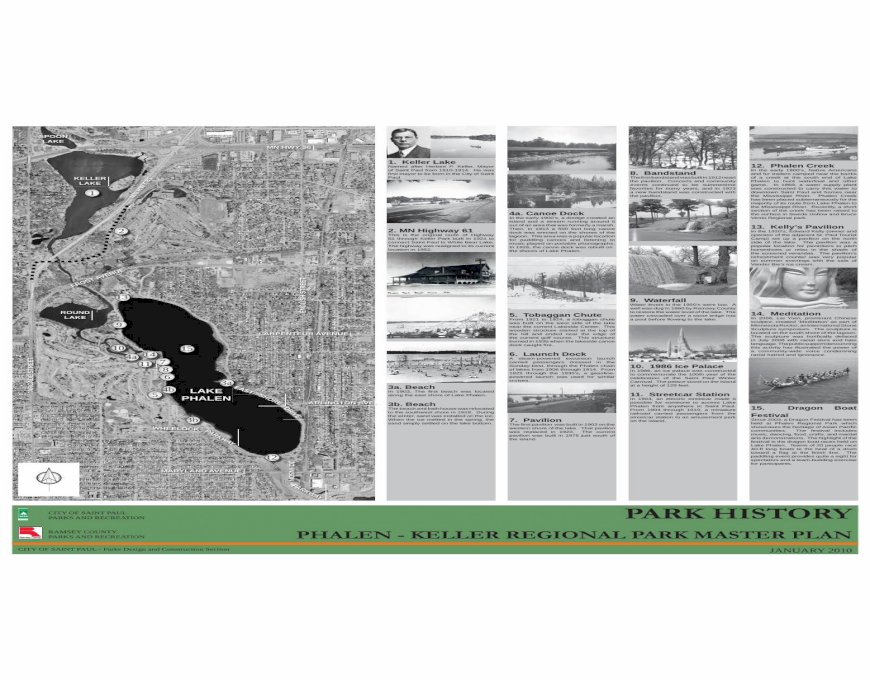 Hmong Life in Saint Paul, Minnesota Pres · PDF file Paul area with the largest number in Saint Paul. Hmong businesses have contributed strongly to the revitalization of the University