Exceeding pre-war records by 50%, 2,062,000 men and women are now crowding Americas colleges to the bursting point. With individual institutions showing increases of from 10 to 500%, educators are finding that lack of space is not their only problem. One college official viewed the influx of 1,073,000 ex-servicemen into the nations classrooms as stimulating, if not always comfortable. The performance of teachers is being challenged for the first time by their students, he said, citing the case of a Western Reserve student-veteran who told a professor his lecture was the stupidest Ive ever heard. Teachers have had to throw their old lecture notes out of the window, said M. B. Toler, mathematics department head at Fenn College. Weve had to acquire a whole new body of knowledge to keep apace of the widely traveled and experienced GI (Alert Veteran Students Prod Stodgy Professors, 1947).

Vietnam Era & All-Volunteer Force Veterans on CampusVeterans Educational Assistance Program (VEAP) was an enlistment incentive for Vietnam and post-Vietnam Era veterans (Bannier, 2006) Inferior to previous incarnations of the GI Bill (Bannier, 2006) Required contributions to the plan with federal government matches at a rate of two to one (Bannier, 2006) Veterans believed they were unwelcome on campuses during this era & consequently were more likely to try to blend in to civilian college life (Rumann & Hamrick, 2009)

Schlossbergs Transition ModelTransition = any event, or non event, that results in changed relationships, routines, assumptions, and roles (as cited in Ryan, Carlstrom, Hughey, & Harris, 2011, p. 56)Four factors will influence the quality of any transition: the self, the situation, the support, and the strategies utilized, otherwise known as the 4 Ss (as cited in Ryan et al., 2011)This model will give a framework for working with Student-Veterans transitioning from active duty military to college, including perceptions of the cultures of college and military life (self), perceived negative or positive reasons for leaving the military (related to the situation), family and connection to others (support), and techniques for navigating through the academic bureaucracy (strategies), among a multitude of other factors (Ryan et al., 2011)

Schlossberg, Lynch, and Chickerings Transition FrameworkIdentified the Moving In, Moving Through, Moving Out structure of transitions (as cited in DiRamio, Ackerman, & Mitchell, 2008)Structure is a useful way of evaluating transitions over time by separating stressors into these headingsResearch (DiRamio et al., 2008) shows that student-veterans identify six factors associated with Moving In to college: connecting with peers, blending in, faculty, campus veterans office, finances, students with disabilities, mental health and PTSD (p. 80)DiRamio, Ackerman, and Mitchells Results (2008)

Military status and receipt of benefits Percent Number Percent NumberTotal in U.S.100.020,928,000100.0 3,456,000Military students Veterans 3.1657,0003.1107,000Active duty 0.7139,0000.829,000Reserves0.476,0000.29,000Nonmilitary students 95.820,055,00095.83,312,000 Among military students Received GI Bill education benefits for200708 academic year 37.7329,00020.529,000Did not receive GI Bill education benefits for 200708 academic year 62.3 543,00079.5115,000(U.S. Department of Education, 2011) New cohort of Student-Veterans is likely to increase in size as troops draw down in Iraq and Afghanistan (Ryan et al., 2011)New Post 9/11 GI Bill includes increased educational benefits (Ryan et al., 2011)Student-Veterans of this era may have difficulties distinct from other eras (Ryan et al., 2011; DiRamio et al., 2008)Current Student-Veterans are a population worthy of student affairs professionals consideration in developing specific programming that can help them to transition out of combat and into collegeMy program addresses the transitioning difficulties of Student-Veterans new to college campuses and would work best at an institution similar to Oregon State UniversityPeer-to-Peer Group Mentoring ProgramNew Student-Veterans are identified during the college application process and informed that another orientation program is available to them; they must opt-in to the programStudent-Veterans who have been on campus for at least one year are trained by a staff member to facilitate mentor groups of clusters of 5 to 8 new Student-Veterans and are supervised by a staff member throughout the programNew Student-Veterans elect to participate in this extended orientation that continues through the first term of their college experience

Mentor Groups meet once a week for an hour over the course of the term, with the trained Student-Veteran facilitator, to discuss transitioning issues, such as financial, relationship, academic, cultural, and mental health difficultiesStudent-Veteran facilitator will be well versed in resources available to his mentees and able to refer them to student affairs offices such as DAS and counselingSession topics may include in-depth discussion of college support services, challenges of the transition out of combat, culture shock, personal stories of military service, and overviews of the warning signs associated with PTSD, enabling Student-Veterans to look for those signs in others and in themselves At the end of the term, new Student-Veterans can elect to continue to meet periodically with their mentor one-on-one to check up and follow through the first yearProgram GoalsTo empower Student-Veterans by offering extensive knowledge of the support services available to themTo create an instant peer group of other Student-Veterans who share a common cultureTo offer a role model and confidant in the Peer MentorTo assist Student-Veterans in Moving In to collegeTo give the Peer Mentor a valuable leadership and service experience in mentoring fellow Student-VeteransTo act as an early warning system for Student-Veterans who are having particular difficulties with their physical, mental, or emotional health or with navigating the red tape of the college campusStudent Affairs Competencies Required to Facilitate this ProgramMulticultural CompetenceStaffing and SupervisionTeaching in the Co-CurriculumAdvising and ConsultationCommunity DevelopmentAcademic and Student Affairs PartnershipsJessica Baron 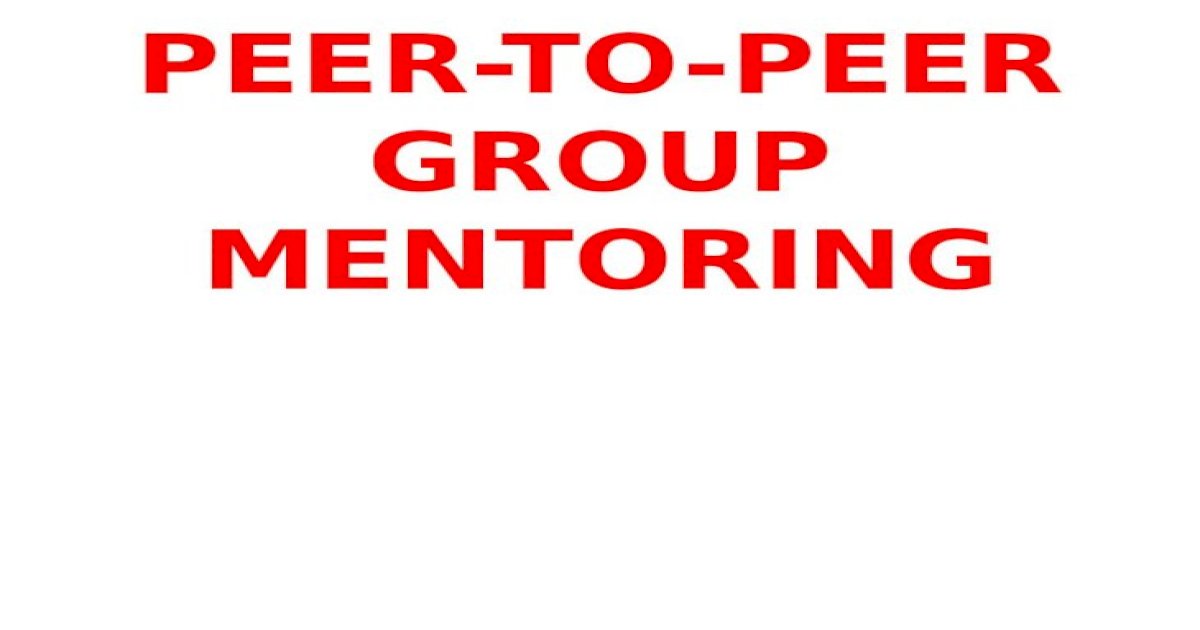 Long-Range Planning Committee Report for 2018 · PDF file Peer to Peer mentoring Peer mentoring is described as mentoring with peers with the same or slightly more experience. Another