BIOGRAPHICAL SKETCHPhyllis Lawsonwww.quiltofsouls.orgMs. Lawson was born in Detroit, Michigan. At the age of four, she was sent to the tiny town of Livingston, Alabama to be raised by her grandmother Lula Horn (1883-1986), who made beautiful quilts out of the clothing of her loved ones. Each strip of fabric tells the story of the wearers life and death. She shared these mostly tragic and sometimes witty tales with little Phyllis as she sewed their clothes into a quilt that threaded broken lives back together. Ms. Lawson now shares these profound stories with the world as Grandmother Lula told them to her. After graduating from High School, Ms. Lawson joined the United States Air Force as a WAF (Womens Air Force) and was one of the first female B-52 mechanics. She served one tour in the Air Force and left the service in 1978. She used her military educational benefits to attend the University of Maryland, receiving a Bachelors of Arts Degree in Sociology and Social Work. She spent twenty years working as a counselor for incarcerated youth, women who were victims of domestic violence, and with youth and adults suffering from alcohol/substance abuse. Three of those years were spent in the United States Army Reserves. Following a seventeen-year break in 2002, Ms. Lawson returned to the military as a member of the U.S. Army National Guard and Active Duty Service, retiring from the U.S Army in 2013. Ms. Lawson was one of only a handful of women in the military who served in three major military conflicts including the Vietnam Era where she served three temporary duty assignments to Vietnam before the 1975 fall of Saigon. She was also deployed to Saudi Arabia as a member of Operation Desert Storm, and in December 2003 in support of Operation Enduring Freedom. She has received three military campaign medals for assignments where she served to support the United States Armed Services in armed conflict, including a U.S. Army Expeditionary, Global War on Terrorism and a host of other Army and Air Force medals for superior performance in the line of duty.After retiring from the military, Ms. Lawson spent the following two years writing her Memoir Quilt of Souls, released March 13, 2015. Since its release, this poignant memoir has garnered a great deal of buzz from social, print and television media. Quilt of Souls is consistently viral on Facebook. As a result of the popularity of her memoir, she has been interviewed and appeared in over 40 different media outlets including internet blog talks, on-line newspapers, social media forums, television and radio and media advertisements. Below is a partial list of her accomplishments: PBS interview with Nancy Zieman April 28, 2016. Will be aired October 2016. Quilt of Souls will also appear on Nancys Notions Website beginning in early October. Guest Speaker at Texas A&M University Women on Women Symposium, 30 March 2016 Appeared on NBC affiliate KBTX, College Station, Texas 29 March 2016 Will appear as a guest speaker on June 9th for One Hundred Black Men of Tallahassee We are One, Diversity and Inclusion Forum and 10 June serves as a VIP guest for the Black Tie Gala. Ms. Lawson will be hosted by the City of Mission Viejo and the Orange County, California Genealogical Association on June 18th 2016. An honor only given to New York Times Best Selling Authors. February 2016 Quilt of Souls was placed on the Readers List of the Alabama Writers Guild/Club Chapter One of Quilt of Souls was chosen to be included in a book of Anthology of writers from around the world. Stories compiled by Frank Joussein of Germany. The book will be released later this year. Guest Speaker for the South Genealogical Society annual conference on July 15,, 2016, with an upcoming television interview on WLTX 19 TV in Columbia, South Carolina where she will discuss Quilt of Souls and how it pertains to her upcoming conference appearance. December 5th 2015, interviewed by award winning journalist Dan Rodricks of the Baltimore Sun Newspaper. Podcast was aired December 17th nationwide. On November 11, 2015, Ms. Lawson achieved a 5 Star Gold Seal from prestigious Book Reviewer; Readers Favorite. December interview by Mother Love Rogers on Los Angeles, Talk Radio. Live radio broadcast with Talktainment radio hosted by; S. Yolanda Robinson, August 2015. Featured speaker at the renowned Pratt Library, Baltimore, Maryland for the Brown Lecture Series. Presentation was recorded for the Library Podcast and added to their lecture series collection. Live Sirius XM 128 Radio interview; Urban Talk Radio with show host Maggie Linton, March 2015. Newspaper special feature interview with the Laurel Leader (Mississippi) October 2015. Appearance on WDAM Television Hattiesburg, MS to kick off author tour. Featured on The Noon Show, October 2015. November 2015, guest on The National Archives and Beyond internet radio talk show hosted by Bernice Bennett. Discussion on the importance of documenting family history. Quilt of Souls received a Five Star Book Review on the highly viewed Women for One on-line magazine. May 2015. Featured story and Book Review by Shenoba Kinsey for the Chicago Scene Magazine June 2015. Since October 2015, Ms. Lawson has had over 30 public appearances in support of her memoir Quilt of Souls. She has appeared at Public Libraries, Book Clubs, High Schools, Quilting Guilds and Genealogical Societies. Ms. Lawson has an overall Five Star rating on Amazon including 125 Five Star Reviews. She also has an overall Five Star Review on Amazon Europe. Ms. Lawson currently resides in Viera/Suntree, Florida with her husband Larry. She has two sons and five Granddaughters. 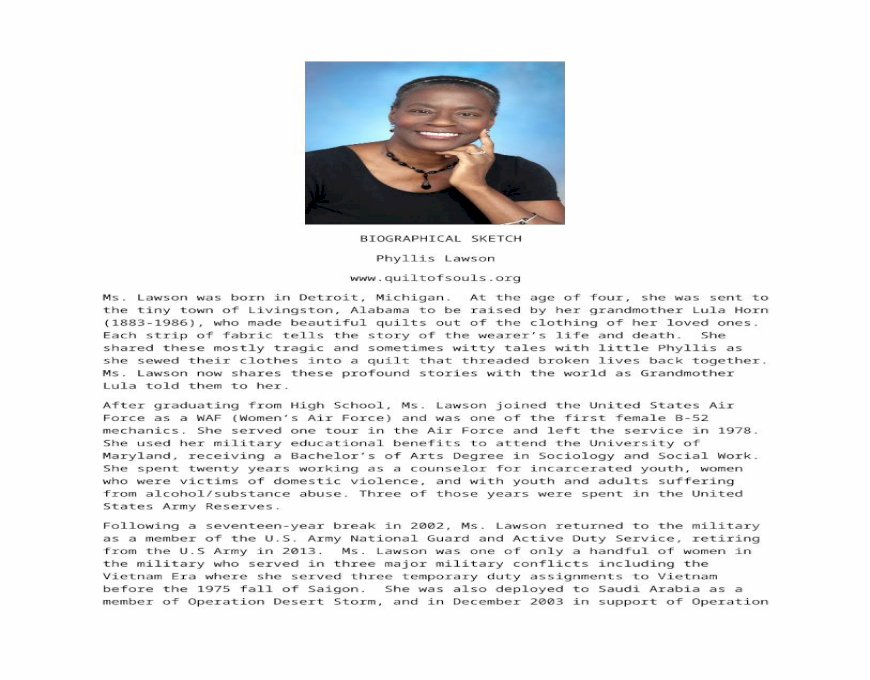 Bio-Identical Hormone Replacement Therapy Is it for you? · PDF file Wise, Phyllis M., The female reproductive system in Physiological Basis of Aging and Geriatrics, Third Edition