DownloadReport this document
Share this document with a friend
Description:
An essay attempting to determine the nature of aesthetic value
Transcript:

Many years ago as a Professor at Radford University in Virginia I noticed that most of the members of the class were using the names of artists to determine what they thought might be the acceptable response to matters of aesthetic value, that is, relative goodness and that there was very nearly a perfect correlation between that and their inability to recognition goodness in the art work. In short, they recognized the name but could not distinguish aesthetic value.

When given the names of 10 artists and asked to arrange them in the order of their goodness the name of Rembrandt was almost universally placed at the top, the number one great artist. When asked to judge the goodness of works by these artists which were not well known the name of Rembrandt appeared at the bottom. From this information I believe I justifiably arrived at the conclusion that our students were very obedient to what they perceived to be our wishes and expectations and were steadfastly unwilling to make their own judgments knownif, indeed, they had had any. In short, while they might be able to tell us, in a rote fashion that Rembrandt was great they lacked the ability to recognize in his work why he was great. That situation is intolerable.

I am, of course, aware that the original proposition was more than ridiculous but what I was attempting to assess was the attitude these students had toward famous names and to determine whether in their assigned judgments they were using aesthetic values as criteria. They were, of course, using aesthetic values as criteria but NOT those of artists. From this experiment I concluded that there is not a shared culture between the producers and scholars of art forms and the general public. This constitutes a serious cultural fracture. I am not looking for a uniformity of opinion, but rather a general body of perceptive awareness.

When Bruce Chatwin, as one in a group of individuals who daily are exposed to several hours of looking at art, is notable for his unusual ability to recognize a genuine work from one that isnt and to do so within a matter of minutes, or seconds, as the story is told, we are dealing with a mind that quite thoroughly recognizes the language of excellence and genuine aesthetic character from among a group (of professionals) that doesnt. This is one of the abilities that should be a standard among art critics upon whom the general public depends for guidance. Although, it must be stated at the outset that , as in all fields, that sort of ability is achieved through considerable effort together with the willingness to accept when one is wrong.

The following comes from a document file I have saved on two American artists, one, Alex Katz, and the other Jacob Lawrence: the text in brown are my comments to selected comments published by the museum . Irish Museum of Modern Artras Nua-Ealane na hireann

Alex Katz is one of the most important American artists of our time, and his impressive body of work constitutes a unique aspect of modern Realism. In 1992 Alex Katz donated more than 400 of his works to the Colby College Museum of Art with the understanding that a wing would be built to house them. The Paul J. Schupf Wing for the Works of Alex Katz, which opened in 1996, was made possible through the generosity of Colby trustee Paul J. Schupf, who contributed the naming gift for the building. The Schupf Wing makes the Colby museum one of the few in the United States with a wing devoted solely to the work of a living artist. Beach Sandals (Museum of San Francisco)

Boy with a Hat (Museum of Modern Art)

I have tried to make as broad a selection of Katzs work as have been currently available to me without burdening the intelligent reader with the tremendous weight of visual boredom Katz createsin those of us who have the opportunity to explore the choices given us within arts and leisure.

I have put that currently popular expression in quotation marks in order to draw attention to its inherent stupidity. I also have used that word carefully giving attention to the fact that its intended meaning is to describe a behavior that normally would not occur with a person using his intelligence. Newspaper reporters and writers of exhibition catalogues are, I believe, normally considered to be among the normally intelligent, but there are many occasions when it would be impossible to prove by what they produce.

Perhaps in the case of Alex Katz and their public relations judgments of his work they are a subgroup of intelligent people who have never learned how to look, or to understand what they are looking at. However, it occurs to me that after one has achieved twenty years of normal education and have been employed as curators at prestigious university museums and write blurbs for the public, (a public which is evidently thought to be incredibly imperceptive) that at least a limited amount of shame and a bit of modesty might accompany their publications. But there is neither as evidenced by those quotations printed above.

The only justifiable conclusion that might be made regarding the popularity of Katzs workand I suspect that a real popularity of his work doesnt, in fact, exist and that his whole reputation is built on the intimidation many feel that should they be honest in their criticism they will be labeled as anti-Semite which is certainly a process which feeds that sentiment.

It is merely a matter of social pressure, money, ethnic promotion and the tax structure that allows those with extra funds to donate museums to educational institutions and tax-break worth a great deal and for the absence of which from the tax income of the country, and/or state, the ordinary, less affluent, and gullibel,public must pay out of tax moneys they have provided to the national coffers. In addition to that outrage, insult is added to injury in the form of a relatively worthless craftsman assuming the status of genius with some one with less influential contacts is ignored. This is the age of deceit and what it means for future historians, if there are any, especially if there are any honest ones, their jobs will be extraordinarily difficult BECAUSE history, to a great extent, is controlled, governed, and limited by what is called documentary evidence. Someone is making sure that some documentary evidence is handy. Thank God for DNA which provides us with some more refined evidence of fatherhood. On the other hand. how many have gone to the gas chamber on the early evidence of the lie detector?

Personally, I probably wouldnt complain were the results of such sacrifice worth the benefit to even 1% of those who visit galleries and museums, but in the case of Alex Katz there is so very little to offer that the effect upon the general public and its meager resources is similar to a double-edged hari-kari sword, It is a societal suicide committed all for the glory of an individual who has cynically chosen to be a smidgen above incompetent, just enough so slip under a raised bar.

The Street 1957 Pool Parlor and Ironers

If I were to be pressed into making a one sentence conclusion concerning my response to the Katz and Lawrence experiences, that is those experiences they provide their viewers, I would say the following with no excuses or explanations whatever. Katz is boring, cynical, manipulative and destructive; Lawrence, is instructive, entertaining, and caring as well as graphically inventive which is one of the more legitimate reasons for being an artist.

Yet, Lawrence does not have, to my knowledge, a museum at a university setting housing his (unsold) works at some unannounced reapportioned cost to the U.S. taxpayer, and of the two he is the one who deserves it. But then, the Jews and the Blacks have always been at each others throats. One wonders why.

History does not always appear to make the playing field more level for those artists who have been largely ignored during their life times. Both Katz and Lawrence have received a great deal of notice and published acclaim. Whether history will judge that Lawrence deserved it and Katz did not will ultimately make little difference as to the degree of economic comfort, great or small, either of them were able to enjoy during their life times. Little comment is ever made, these days at any rate, on the established, accomplished or potential aesthetic value these works have had or will have on those who see them, but for the record I think it important to indicate, at least, a starting point where having some contemporary judgments made about these cultural contributions to our lives might be found.

This programmed cultural disceit is not limited to the arts, and as we have learned, to political pronouncements as well, but we even find it among those august academicians who maintain the reputation of 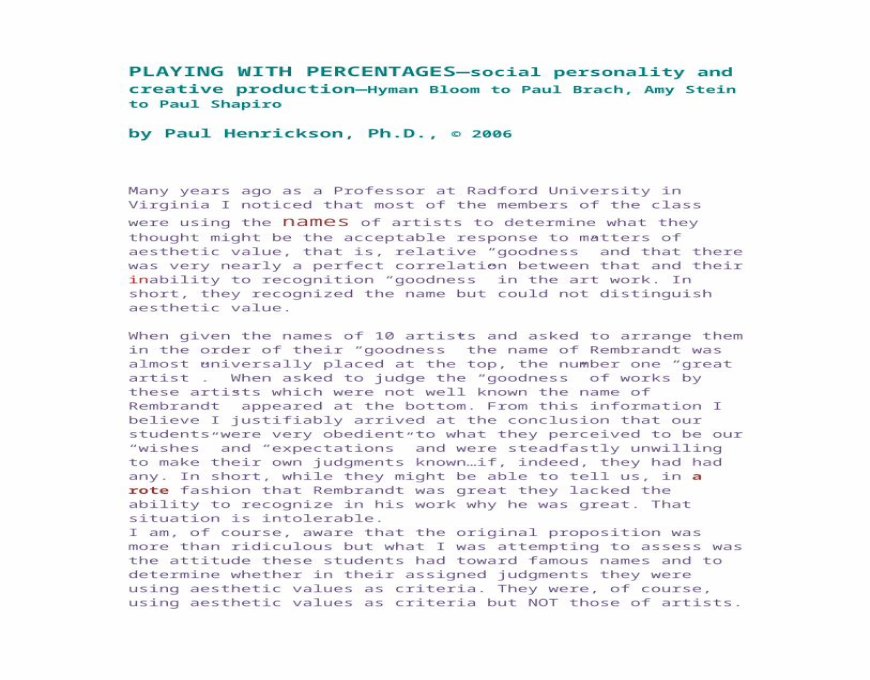 Two important things when working with percentages are:

Working with Percentages A visual representation

Percentages, Fractions and Decimals Finding percentages of amounts A good way to find percentages is

playing with catalogs/Playnetic Flier.pdf¢  playing with energy. We learn while playing, by trial and