POLYCYCLIC AROMATIC HYDROCARBONS AND THEIR EFFECT ON THE ENVIRONMENT

SOURCES, USES AND PROPERTIES OF PAHs

The aim of this presentation is to reviewcontemporary information on PAH pollution, PAH degradation, the fate and risk associated with the presence of these compounds in the environment and also to enlighten on some well-known possible remediations.

INTRODUCTIONPolycyclic aromatic hydrocarbons (PAHs) are widely distributed and relocated in the environment as a result of the incomplete combustion of organic matter. Many PAHs and their epoxides are highly toxic, mutagenic and/or carcinogenic to microorganisms as well as to higher systems including humans. Although various physicochemical methods have been used to remove these compounds from our environment, they have many limitations.

INTRODUCTIONWHAT ARE PAHs?Polycyclic aromatic hydrocarbons are hydrocarbonsorganic compounds containing only carbon and hydrogenthat are composed of multiple aromatic rings (organic rings in which the electrons are delocalized)[1].

They are a class of carcinogenic organic molecules that consist of three or more benzene rings and are commonly produced by fossil fuel combustion.

SOURCES AND USESPAHs are organic molecules that form from a variety of natural and anthropogenic reactions.Natural polynuclear aromatic hydrocarbons form from forest fires and volcanic eruptions.Man contributes PAHs by burning wood and incomplete combustion of fossil fuels.The compounds are numerous in fossil fuels, such as coal and petroleum.Anthropogenic sources can be devised into two categories: the combustion of materials for energy supply (e.g. coal, oil, gas, wood, etc.) and combustion for waste minimalization (e.g. waste incineration) [1,2]

SOURCES AND USESAlthough the emphasis is on avoiding exposure to PAHs, some of these molecules are useful for making medicines, plastics, dyes, and pesticides.

PROPERTIES OF PAHsPolycyclic aromatic hydrocarbons are lipophilic, nonpolar molecules.They tend to persist in the environment because PAHs are not very soluble in water. They are weakly volatile and dissolve weakly in water. All PAHs are solid at room temperature and have high melting and boiling points.The movement of PAHs in the environment depends on properties such as how easily they dissolve in water and how easily they evaporate in the air.

Plant can absorb PAHs from soils through their roots and translocate them to other plant parts.

PAHs are moderately persistent in the environment, and can bio-accumulate.

ENVIRONMENTAL EFFECTSPAHs are usually released into the air, or they evaporate into the air when they are released to soil or water .Since PAHs are generally insoluble in water, they are generally found adsorbed on particulate and precipitated in the bottom of lakes and rivers, or solubilized in any oily matter which may contaminate water. PAHs have moderate to high acute toxicity to aquatic life and birds.

DEGRADATION OF PAHsDegradation of PAHs in the environment occurs through biological, chemical and photochemical processes.

These processes may also be utilized for remedial purposes. However, the degradation may result in a variety of transformation products some of which could potentially accumulate.

CONCLUSIONPAHs are released to the environment through natural and synthetic sources with emissions largely to the atmosphere. Synthetic sources provide a much greater release volume than natural sources.

PAHs are transported from surface waters by volatilization. In soil and sediments, microbial metabolism is the major process for degradation of PAHs. PAHs have a potential effect on the environment,both directly and indirectly. 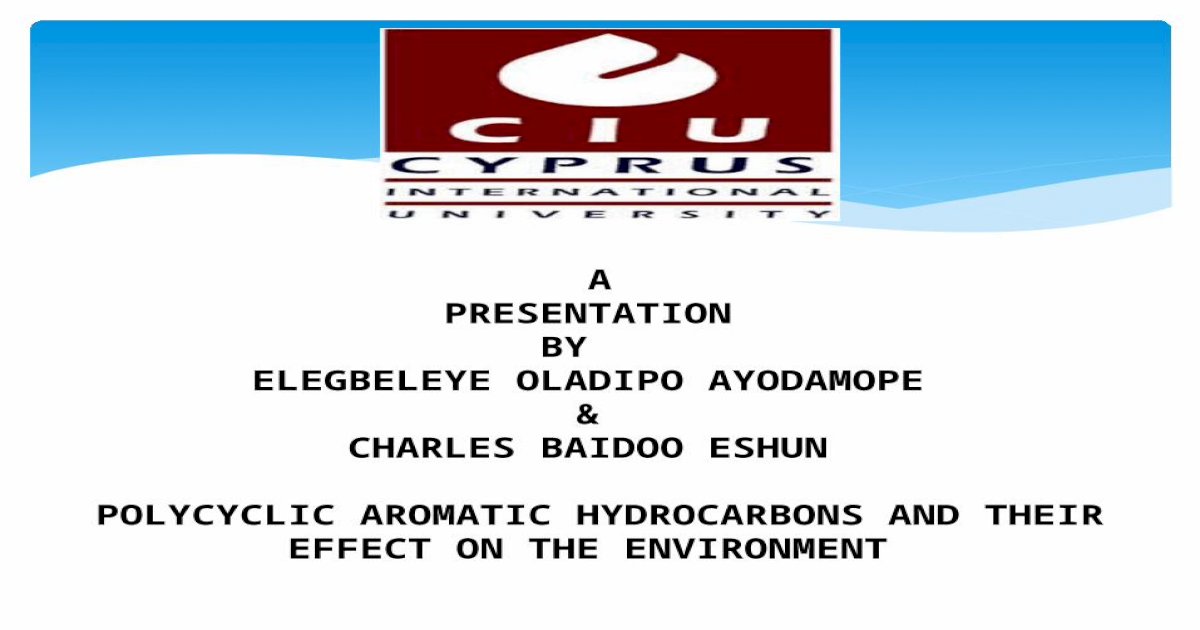 Polycyclic Aromatic Hydrocarbons Why the Ban