Who am I?Engineer passionate about running software reliably in production.

Know when things go wrongTo call in a human to prevent a business-level issue, or prevent an issue in advanceBe able to debug and gain insightTrending to see changes over time, and drive technical/business decisionsTo feed into other systems/processes (e.g. QA, security, automation)

Common Monitoring ChallengesThemes common among companies Ive talk to and tools I've looked at:Monitoring tools are limited, both technically and conceptuallyTools dont scale well and are unwieldy to manageOperational practices dont align with the businessFor example: Your customers care about increased latency and its in your SLAs. You can only alert on individual machine CPU usage.Result: Engineers continuously woken up for non-issues, get fatigued

What is Prometheus?Prometheus is a metrics-based time series database, designed for whitebox monitoring.

Alerting and graphing are unified, using the same language.

Development HistoryInspired by Googles Borgmon monitoring system.Started in 2012 by ex-Googlers working in Soundcloud as an open source project, mainly written in Go. Publically launched in early 2015, and continues to be independent of any one company. Incubating with the CNCF.

Over 250 people have contributed to official repos. 50+ 3rd party integrations.Hundreds of companies rely on it since then.

Your Services have Internals

Prometheus Clients as a Clearinghouse

Monitor as a Service, not as Machines

This efficiency means that the vast majority of users never need to worry about scaling.

DecentralisedPull based, so easy to on run a workstation for testing and rogue servers cant push bad metrics.

Each team can run their own Prometheus, no need for central management or talking to an operations team.

ReliableA monitoring system should be something you trust when your network and systems are falling apart.

Prometheus has no external dependencies. It has no complex CP clustering to go wrong.

For HA we keep it simple.

OpinionatedAs a project, we recognise our limitations.We try avoid reinventing the wheel when others have already solved a problem, e.g. Grafana over Promdash.

We encourage good practices and using the right tool for the job: You could trigger a script to restart a failed process via the Alertmanager, but a supervisor such as daemontools or monit is probably a better approach.

10 Tips for MonitoringWith potentially millions of time series across your system, can be difficult to know what is and isn't useful.

What approaches help manage this complexity?

How do you avoid getting caught out?

#1: Choose your key statisticsUsers don't care that one of your machines is short of CPU.

Users care if the service is slow or throwing errors.

For your primary dashboards focus on high-level metrics that directly impact users.

#2: Use aggregationsThink about services, not machines.

Once you have more than a handful of machines, you should treat them as an amorphous blob.

Once you have isolated a problem to one service, then can see if one machine is the problem

#3: Avoid the Wall of GraphsDashboards tend to grow without bound. Worst I've seen was 600 graphs.

It might look impressive, but humans can't deal with that much data at once.(and they take forever to load)

Your services will have a rough tree structure, have a dashboard per service and talk the tree from the top when you have a problem. Similarly for each service, have dashboards per subsystem.

Rule of Thumb: Limit of 5 graphs per dashboard, and 5 lines per graph.

#4: Client-side quantiles aren't aggregatableMany instrumentation systems calculate quantiles/percentiles inside each process, and export it to the TSDB.

It is not statistically possible to aggregate these.

If you want meaningful quantiles, you should track histogram buckets in each process, aggregate those in your monitoring system and then calculate the quantile.

This is done using histogram_quantile() and rate() in Prometheus.

A: It depends, could be no change. If the latencies are strongly correlated for each request across the backends, you'll see the same latency bump.

This is tricky to reason about, especially in an emergency.

Averages don't have this problem, as they include all requests.

#6: Costs and Benefits1s resolution monitoring of all metrics would be handy for debugging.

Monitoring isn't free. It costs resources to run, and resources in the services being monitored too. Quantiles and histograms can get expensive fast.

#7: Nyquist-Shannon Sampling TheoremTo reconstruct a signal you need a resolution that's at least double it's frequency.

If you've got a 10s resolution time series, you can't reconstruct patterns that are less than 20s long.

Higher frequency patterns can cause effects like aliasing, and mislead you.

If you suspect that there's something more to the data, try a higher resolution temporarily or start profiling.

#8: Correlation is not Causation - Confirmation BiasHumans are great at spotting patterns. Not all of them are actually there.

Always try to look for evidence that'd falsify your hypothesis.

If two metrics seem to correlate on a graph that doesn't mean that they're related.

They could be independent tasks running on the same schedule.Or if you zoom out there plenty of times when one spikes but not the other.Or one could be causing a slight increase in resource contention, pushing the other over the edge.

#9 Know when to use Logs and MetricsYou want a metrics time series system for your primary monitoring.Logs have information about every event. This limits the number of fields (10000) with limited cardinality.

Metrics help you determine where in the system the problem is. From there, logs can help you pinpoint which requests are tickling the problem.

#10 Have a way to deal with non-critical alertsMost alerts don't justify waking up someone at night, but someone needs to look at them sometime.

Better to have some form of ticketing system that'll assign a single owner for each alert.

A daily email with all firing alerts that the oncall has to process can also work.

It's easy to get in over your head when starting to appreciate to power of of time series monitoring and Prometheus.

The one thing I'd say is to Keep it Simple.

Just like anything else, more complex doesn't automatically mean better. 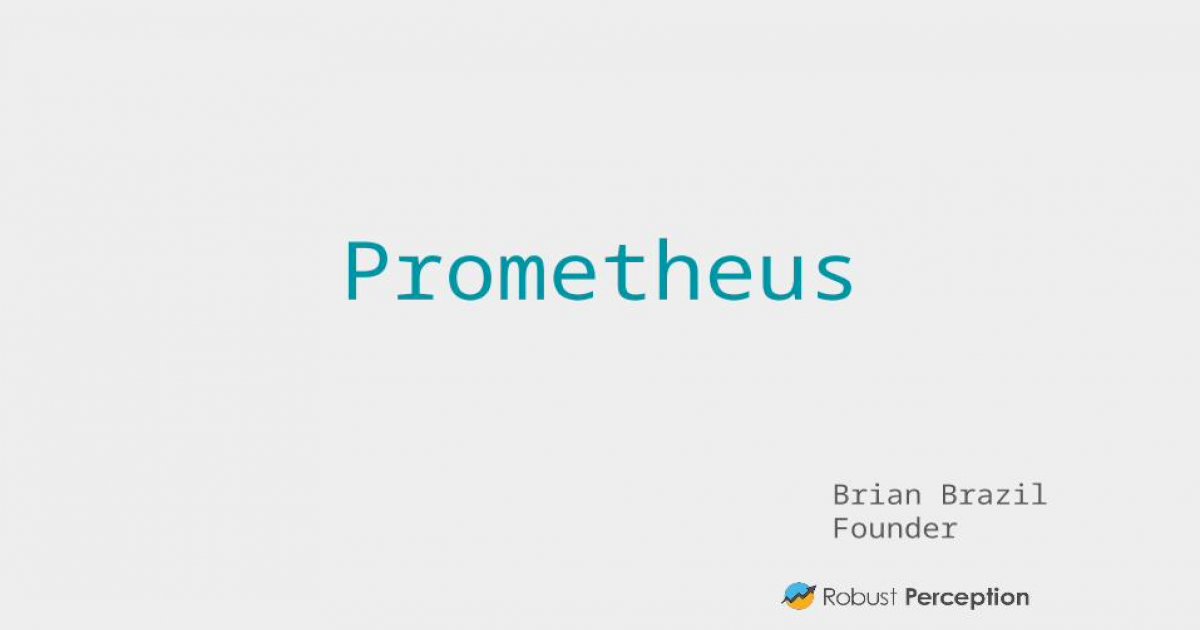