Regional and Local government in Italy: an overview

1. Relationships between the State and the territorial collectivities: general features

metropolitan cities and towns. The Constitution dedicates all of Title V (Articles 114-133) to them,

as well as the first phrase of Article 5, which recognizes and promotes local autonomy. Article 114

Constitution. This empowers the State to enact legislation granting further forms of autonomy to

interested regions in a number of areas (for example, protection of the environment, ecosystems and

the cultural heritage). However, this provision has not yet been implemented.

With regard to the local governmental authorities, the metropolitan cities have not yet been

established, despite of the fact that they have been mentioned in the italian legislation since 1990. On the

contrary, notwithstanding the continuous legislative efforts to set a limit, the number of provinces

and towns has been continuosly increasing, reaching, respectively, the amount of 107 and 8,101,.

Both provinces and towns are wide-ranging categories. About 80% of the provinces have a

population of between 100-500,000 inhabitants; only three provinces, by contrast, have more than

Over time, however, local governments have become more articulated, and new forms have

been added to the ones set forth in the Constitution. In particular, the unsuccessful efforts to abolish

associational forms. The most important of these bodies are the following: consortia (around

4,000), where different local authorities cooperates in the management of one or more service or in

the exercise of certain functions; mountain communities (just under 350), established by mountain

(and partially mountainous) villages and towns for the development of mountainous zones, and

town unions (whose number has grew up to three hundred units), which bring together small towns

in order to provide services more efficiently. Each of the associational forms above mentioned has

established by legislative decree n.267/2000), a governing and administrative organization, and a

number of financial incentives. A situation that has contributed to the creation of hazardous

overlaps for the efficiency (economic and otherwise) of local administration.

In order to complete the picture of local government, it must be mentioned that there was

also a reform of the peripheral administration of the State in the late 1990s, in close connection with

the reform of decentralization adopted by the Italian legislature (in particular, this is the case of the

laws enacted between 1997 and 1999). These laws provided for the transfer of administrative

competences from the center to the periphery, effectively prefiguring a comprehensive reform of the

organization of ministries and their peripheral offices. According to the reform law of 1999, the

governo or UTG). These offices were conceived so as to have a general character, in the sense of

offices of the security forces). Anyway the law was never implemented: local offices are still tied to

coordinating function, but are not active administrations.

1.2. The political organization of regional and local bodies.

Regions, provinces and towns are political entities, empowered therefore to protect the interests

of their respective communities. They all have a very similar governmental structure, consisting of

three main bodies: the council (consiglio), the giunta and its president (or the mayor in the towns).

The council is the representative body; it exercises law- and policy-making powers; its

members are elected by universal suffrage for a five-year term. The giunta is the executive body; it

demographic density. Each of them is assigned to a specific administrative branch as chosen by the

elected by universal direct suffrage and can exercise a number of powers, such as representation,

The main differences between the regions, on the one hand, and provinces and towns on the

other, are strictly related with the range of discretionary power which are entitled to exercise.

provinces and towns. In this area, the local statutes can dictate only minor rules, and even then, the

basic law is currently set forth by the 2000 restatement of local government law.

The law governing regional powers is even more complex. In fact, the regional electoral system

concurrent jurisdiction between the region and the State. The form of government, by contrast, can

be determined by regional laws and statutes. The Constitution does set forth some default rules that

apply until the regional norms have entered into force. It is interesting to observe that the first

to the transition law.

This analysis of the law governing the allocation of competences is divided into two parts. I will

focus here on general principles, and then follow with an examination of some specific sectors.

The Constitution sets forth a two-fold principle of separation: separation by subject-matter,

which informs the distribution of legislative competences between the State and the regions,

subjecting them both to the same limitations, and separation by type of attribution, which tends

instead to assign administrative powers to the towns. Regarding the laws, the Constitution

enumerates the areas in which the State has exclusive jurisdiction, and those where there is

concurrent jurisdiction between the State (within the limits of basic principles) and the regions. All

of the areas not included in the two lists are reserved to the regions.

There are two main criteria for determining the areas of exclusive State competence: one

etc.); the other criteria assigns this exclusive competence over areas that are otherwise subjected to

regional competence (for example, the determination of the basic levels of civil rights protection

and social services that ought to be guaranteed throughout the land, antitrust, the protection of the

The list of concurring competences between the State and the regions is very long. It

and extends to the main economic sectors (for example, industry, commerce, agriculture), a vast

regulatory powers: they belong to the State only in the areas of its exclusive competence, and to the

regions in all the other ones. Regulatory powers are also granted to the towns and provinces, in

order to let them regulate the orga 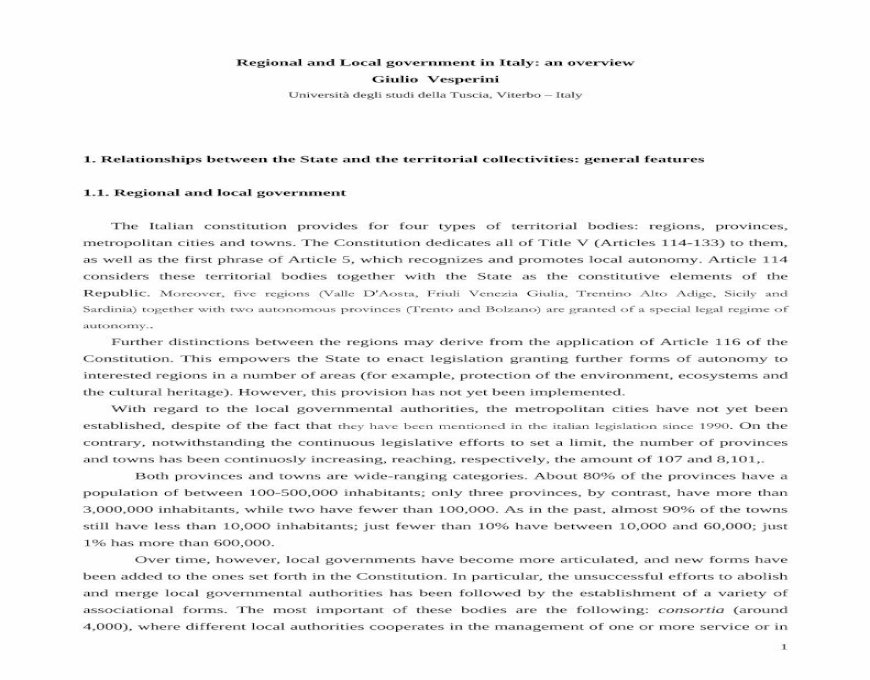