Printed in the USA

The Problem of St. Francis 1

The Mirror of Christ 65

The Testament of St. Francis 85

Asketch of St. Francis of Assisi in modern English may be written in one ofthree ways. Between these the writer must make his selection; and the thirdway, which is adopted here, is in some respects the most difficult of all. At least, itwould be the most difficult if the other two were not impossible.

First, he may deal with this great and most amazing man as a figure in secularhistory and a model of social virtues. He may describe this divine demagogue asbeing, as he probably was, the worlds one quite sincere democrat. He may say (whatmeans very little) that St. Francis was in advance of his age. He may say (what isquite true) that St. Francis anticipated all that is most liberal and sympathetic in themodern mood; the love of nature; the love of animals; the sense of social compas-sion; the sense of the spiritual dangers of prosperity and even of property. All thosethings that nobody understood before Wordsworth were familiar to St. Francis. Allthose things that were first discovered by Tolstoy could have been taken for grantedby St. Francis. He could be presented, not only as a human but a humanitarian hero;indeed as the first hero of humanism. He has been described as a sort of morningstar of the Renaissance. And in comparison with all these things, his ascetical theol-ogy can be ignored or dismissed as a contempory accident, which was fortunatelynot a fatal accident. His religion can be regarded as a superstition, but an inevitablesuperstition, from which not even genius could wholly free itself; in the consider-ation of which it would be unjust to condemn St. Francis for his self denial orunduly chide him for his chastity. It is quite true that even from so detached astandpoint his stature would still appear heroic. There would still be a great deal to

be said about the man who tried to end the Crusades by talking to the Saracens orwho interceded with the Emporer for the birds. The writer might describe in apurely historical spirit the whole of the Franciscan inspiration that was felt in thepainting of Giotto, in the poetry of Dante, in the miracle plays that made possiblethe modern drama, and in so many things that are already appreciated by the mod-ern culture. He may try to do it, as others have done, almost without raising anyreligious question at all. In short, he may try to tell the story of a saint withoutGod; which is like being told to write the life of Nansen and forbidden to mentionthe North Pole.

Second, he may go to the opposite extreme, and decide, as it were, to be defi-antly devotional. He may make the theological enthusiasm as thoroughly the themeas it was the theme of the first Franciscans. He may treat religion as the real thingthat it was to the real Francis of Assisi. He can find an austere joy, so to speak, inparading the paradoxes of asceticism and all the topsy-turveydom of humility. Hecan stamp the whole history with the Stigmata, record fasts like fights against adragon; till in the vague modern mind St Francis is as dark a figure as St. Dominic.In short, he can produce what many in our world will regard as a sort of photo-graphic negative; the reversal of all lights and shades; what the foolish will find asimpenetrable as darkness and even many of the wise will find almost as invisible asif it were written in silver upon white. Such a study of St. Francis would be unintel-ligible to anyone who does not share his religion, perhaps only partly intelligible toanyone who does not share his vocation. According to degrees of judgement, it willbe regarded as something too bad or too good for the world. The only difficultyabout doing the thing in this way is that it cannot be done. It would really require asaint to write about the life of a saint. In the present case the objections to such acourse are insuperable.

Third, he may try to do what I have tried to do here; and as I have alreadysuggested, the course has peculiar problems of its own. The writer may put himselfin the position of the ordinary modern outsider and enquirer; as indeed the presentwriter is still largely and was once entirely in that position. He may start from thestandpoint of a man who already admires St. Francis, but only for those thingswhich such a man finds admirable. In other words he may assume that the reader isat least as enlightened as Renan or Matthew Arnold; but in the light of that enlight-enment he may try to illimunate what Renan and Matthew Arnold left dark. Hemay try to use what is understood to explain what is not understood. He may try tosay to the modern English reader: Here is an historical character which is admit-tedly attractive to many of us already, by its gaiety, its romantic imagination, itsspiritual courtesy and cameraderie, but which also contains elements (evidently equally

The Problem of St. Francis 3

sincere and emphatic) which seem to you quite remote and repulsive. But after all,this man was a man and not half a dozen men. What seems inconsistency to you didnot seem inconsistency to him. Let us see whether we can understand, with the helpof the existing understanding, these other things that now seem to be doubly dark,by their intrinsic gloom and their ironic contrast. I do not mean, of course, that Ican really reach a psychological completeness in this crude and curt outline. But Imean that this is the only controversial condition that I shall here assume; that I amdealing with the sympathetic outsider. I shall not assume any more or any less agree-ment than this. A materialist may not care whether the inconsistencies are recon-ciled or not. A Catholic may not see any inconsistencies to reconcile. But I am hereaddressing the ordinary common man, sympathetic but sceptical, and I can onlyrather hazily hope that, by approaching the great saints story through what is evi-dently picturesque and popular about it, I may at least leave the reader understand-ing a little more than he did before of the consistency of a complete character; thatby approaching it in this way, we may at least get a glimmering of why the poet whopraised his lord the sun, often hid himself in a dark cavern, of why the saint whowas so gentle with his Brother the Wolf was so harsh to his Brother the Ass (as henicknamed his own body), of why the troubadour who said that love set his heart onfire separated himself from women, of why the singer who rejoiced in the strengthand gaiety of the fire deliberately rolled himself in the snow, of why the very songwhich cries with all the passion of a pagan, Praised be God for our Sister, MotherEarth, which brings forth varied fruits and grass and glowing flowers, ends almostwith the words Praised be God for our Sister, the death of the body.

Renan and Matthew Arnold failed utterly at this test. They were content tofollow Francis with their praises until they were stopped by their prejudices; thestubborn prejudices of the sceptic. The moment Francis began to do somethingthey did not understand or did not like, they did not try to understand, still less tolike it; they simply turned their backs on the whole business and walked no morewith him. No man will get any further along a path of historical enquiry in thatfashion. These skeptics are really driven to drop the whole subject in despair, toleave the most simple and sincere of all historical characters as a mass of contradic-tion, to be praised on the principle of the curates egg. Arnold refers to the asceti-cism of Alverno almost hurriedly, as if it were an unlucky but undeniable blot onthe beauty of the story; or rather as if it were a pitiable break-down and bathos atthe end of story. Now this is simply to be stone-blind to the whole point of anystory. To represent Mount Alverno as the mere collapse of Francis is exactly likerepresenting Mount Calvary as the mere collapse of Christ. Those mountains aremountains, whatever else they are, and it is nonsense to say (like the Red Queen)

that they are comparitive hollows or negative holes in the ground. They were quitemanifestly meant to be culminations and landmarks. To treat the Stigmata as a sortof scandal, to be touched on tenderly but with pain, is exactly like treating theoriginal five wounds of Jesus Christ as five blots on his character. You may dislikethe idea of asceticism; you may dislike equally the idea of martyrdom; for thatmatter you may have an honest and natural dislike of the whole conception ofsacrifice symbolised by the cross. But if it is an intelligent dislike, you will retain thecapacity for seeing the point of the story; the story of a mar 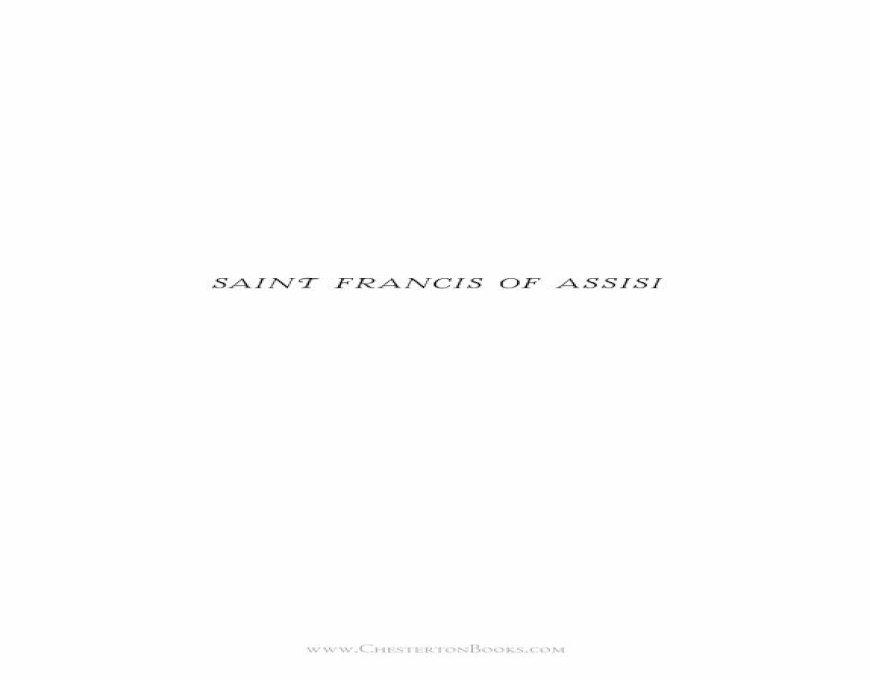 ON MAKING OURSELVES UNDERSTOOD - treatment". Eventually, as G. K. Chesterton has sug-gested, murder

HERETICS - Chesterton .2-G. K. Chesterton and it failed altogether in its object. But there is one