This paper presents a novel extended iterative closest point algorithm which can handle3D point sets registration problem with scaling factor. In each iterative process of thisalgorithm, a scaling factor is introduced into objective function used to estimate all thetransformation parameters, and this paper succeeds in solving this objective function usingdual number quaternions. If the corresponding point pairs have been established properly,this algorithm can give all the global optimal transformation parameters by one-step calcu-lation rather than iterative process. This algorithm is independent of shape representationand feature extraction, and thereby it is general for scaling registration of 3D point sets.The effectiveness of proposed algorithm is demonstrated in several experiments on sim-ulated 3D curves and real 3D point clouds. Furthermore, the execution time of proposedalgorithm is analyzed by a comparative experiment. The final results demonstrate that thisalgorithm can successfully handle 3D point sets registration problem with scaling factor,and this algorithm has a better performance in the aspect of running speed for a big size of3D point sets.

Iterative Closest Point (ICP) algorithm has an excellent performance in 3D point sets registration problem for its goodccuracy and fast speed [6,7]. It is able to estimate the optimal transformation parameters by a finite iteration. Since the ICPlgorithm came forward 20 years ago, many scholars have introduced numerous improved algorithms. In order to speedp the closest points search, Nuchter [8] proposed cached k-D closest point search algorithm. In order to discard pseudoorresponding point pairs, Rousseeuw [9] proposed a versatile method for computing the maximum allowable distance. Inrder to decrease the probability of being trapped in a local minimum, Sharp [10] proposed invariant features, and manylgorithms used to compute rough pre-alignment parameters were described [11,12]. The genetic algorithms and evaluation

etric were introduced by Silva [13] into ICP algorithm for more precise registration. In many applications of ICP algorithm,

[15] improved the ICP algorithm by hierarchical model point selection and logarithmic data point search. Moreover, the ICPalgorithm was extended to the non-rigid registration [16,17].

The ICP algorithm was proposed many years ago, and its improved algorithm has achieved state-of-the-art results [18,19].However, the original ICP algorithm and its improved algorithm dont take scaling factor into account. In fact, the scaling factoralways exists in some cases since images acquired by real digitizers differ greatly in viewpoints and scanning resolutions[20]. In [21], the scaling factor was estimated by using extended signature image. While this method needs local featuredata, it is difficult to extend it to various applications. In [22], Ziner et al. introduced the scaling factor into error objectivefunction for the first time. In that paper, the singular value decomposition (SVD) algorithm was used to compute rotationmatrix, and the author proposed a hypothesis which claims the estimation of the rotation matrix is not affected by theintroduced scaling factor at all. However, this hypothesis was not proved by rigorous mathematical deduction, and it wasjust verified by many tests. In [20], Ying et al. proved this hypothesis, and gave the whole algorithm which can handle pointsets registration problem with scaling factor using SVD algorithm. In fact, the basic implementation process of Zinersalgorithm is similar to that of Yings algorithm.

In this paper, we propose an extended ICP algorithm with scaling factor. This algorithm is independent of shape repre-sentation and feature extraction, and thereby it is general for scaling registration of 3D point sets. It can easily be appliedto a wide range of existing variants of the ICP algorithm. This paper also proves that the estimation of the rotation matrixis not affected by the introduced scaling factor at all by rigorous mathematical deduction. In each iterative process whenthe corresponding point pairs have been established properly, this algorithm can also give all the global optimal transfor-mation parameters by one-step calculation rather than iterative process. In our work, all the transformation parameters arecomputed by using the dual number quaternions(DQ) method. In order to verify the effectiveness of proposed algorithm,several experiments on simulated 3D curves and real 3D point clouds were performed. The final results demonstrate thisalgorithm can successfully handle 3D point sets registration problem with scaling factor, which is not possible for the basicICP algorithm without initial registration. We can also conclude that the basin of convergence of the ICP algorithm with orwithout scaling factor depends strongly on the shape and structure of the point sets, and good pre-alignment parameters arevery important for entire algorithm. In many applications of ICP algorithm, the execution time is always an important factorneeded to be considered. Especially, with the progress of various 3D range data acquisition techniques, the size of point setsis becoming bigger and bigger. Therefore, it is strongly required that the registration algorithm can have an as fast runningspeed as possible for large point sets. Therefore, the execution time of proposed algorithm is analyzed by a comparativeexperiment. The final result shows that our algorithm has a better performance in the aspect of running speed for a big sizeof 3D point sets compared with Ziners algorithm. So our algorithm has a better application prospect in the future.

The paper is organized as follows. In Section 2, we firstly review the structure and the mathematical details of the basic ICPalgorithm. Then, we present our algorithm and analyze its convergence. In Section 3, several experiments on simulated 3Dcurves and real 3D point clouds are performed in order to verify the effectiveness of proposed algorithm. Then, a comparativeexperiment is carried out in order to analyze the execution time of proposed algorithm. In Section 4, several conclusionsbased on the previous experiments are drawn.

What we want to handle in this paper is to register two 3D point sets. It is a very difficult problem because the effectof rotation, translation, scaling, noise and outlier point. In order to handle this registration problem, we must describe thisproblem using mathematical language firstly.

In this function, f can be various objective functions, and T is what we want to obtain.

The basic ICP algorithm is a kind of iterative algorithm, 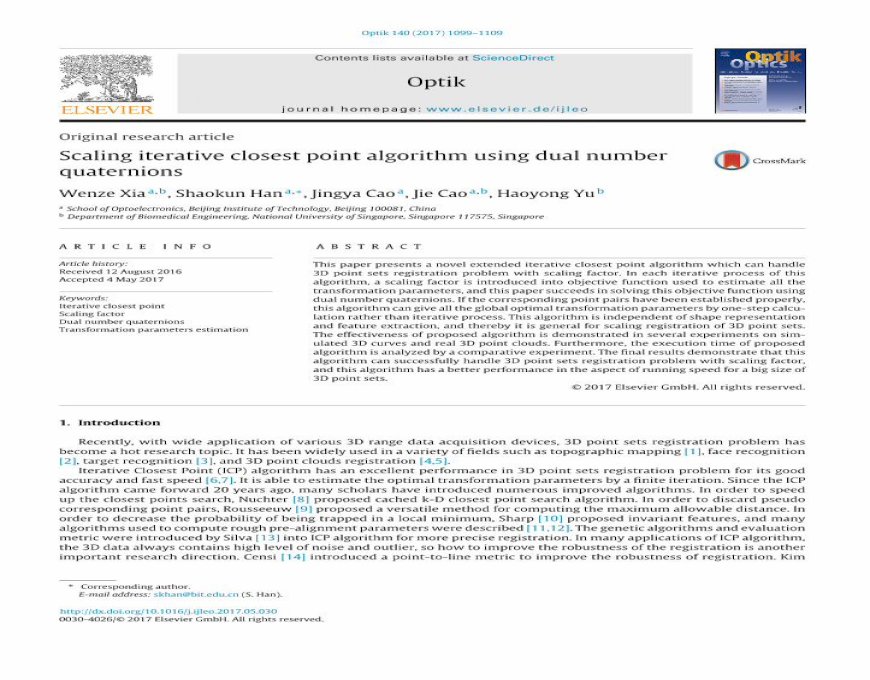 An iterative closest point approach for the registration of volumetric

NICP: Dense Normal Based Point Cloud Registration · PDF file The Iterative Closest Point (ICP) algorithm [?] is one of the earliest and most used techniques for registering point

Terrestrial and Aerial Laser Scanning Data Integration ... ... during the integration of data coming from different positions, an Iterative Closest Point (ICP) algorithm was used to

R obust registration for computer-integrated orthopedic ... · PDF file The iterative-closest-point (ICP) algorithm of Besl and which can be present in the measurements if, for example,